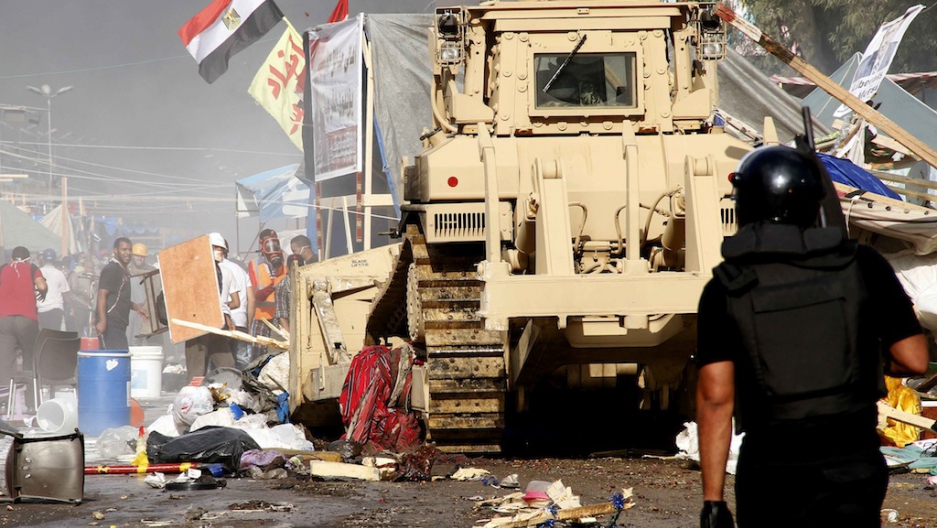 When reports last week spoke of a drone attack on Egyptian territory aimed at preempting attacks from the Sinai Peninsula into Israel, the Egyptian Army was embarrassed.

The drone in question, most everyone says, was Israeli. The long but cold peace sealed at Camp David in 1978 had largely prevented such contact between Israel and Egyptians over the past several decades. Now, with the Army holding the political fate of the country in its hands for the second time in three years, this alleged Israeli incursion — even if the target is of mutual interest — has proven deeply inconvenient.

Since the army stepped in two years ago to prevent a bloodbath in Tahrir Square — thereby precipitating the fall of the regime of Hosni Mubarak, himself a former Air Force chief of staff — the military has played up its role as protectors of the people.

But with generals so involved in the political fray, can Egypt’s soldiers effectively control the country’s borders or see to its interests abroad? If reports about the Israeli strike are true, at least one neighboring power thinks not.

Increasingly, military analysts and some within Egypt are asking the question, too. This could have important implications for the army’s position in society and for the balance of power in the region.

During Mubarak’s long tenure, which started with the assassination of Anwar Sadat in 1981, the army extended its tentacles into every sector of the Egyptian economy, from banking to bakeries to beach resorts. Estimates vary of the Army’s hold on the economy, but Robert Springborg, an expert on Egypt's armed forces and a professor in the department of national security at the Naval Postgraduate School in California, puts the range at between 10 percent and 40 percent.

It wasn’t always easy to tell the difference between an Egyptian firm owned by those close to the Mubarak regime and one owned by the army, so interchangeable were the two.

“There is, among many Egyptians, a sense that despite what the military says about wanting to set Egypt on the path to democracy, that the military has intervened in order to protect its own economic interests and its own place in the political system,” said Steven V. Cook, senior fellow on Middle Eastern affairs at the Council on Foreign Relations and author of several books on Egypt.

The current army chief, Abdel Fattah al-Sisi, has pronounced himself uninterested in running the country and promised to hold new elections to choose a president democratically. Following the army’s July ouster of President Mohamed Morsi, Sisi has so far tolerated the mass demonstrations demanding Morsi’s return to power, and has shown signs of trying to negotiate a way out of the mess.

But an Israeli incursion was, if you can excuse the phrase, the straw that broke the camel’s back. On Sunday, the army went hunting in Sinai, and by Monday morning was happily bragging of an attack by its own helicopters on suspected militants there that left 12 dead.

For those older than 40, the deterioration of Egypt’s hold on Sinai and the army’s increasingly determined efforts to control the political landscape  present a starkly different picture of Egypt’s military, once the vanguard of the Arab “frontline” against Israel and by far the most capable force in the Middle East.

“Operation Badr” will not ring a bell with many outside of the Middle East, but within the region — and particularly for Israelis and Egyptians — the name still resonates.

The code name for the crossing of the Sinai by Egyptian forces in 1973, Operation Badr stands as perhaps the most brilliant amphibious assault since MacArthur’s landing at Inchon during the Korean War. It’s certainly the brightest moment in the Arab catalog of ignominy in their many wars with Israel.

But the Egyptian army today, in spite of billions of dollars a year in US military aid, access to American staff colleges and a privileged position in its own society, is in poor fighting condition. The suspension of aid announced by Washington last month, which will delay delivery of four new F-16 fighter jets as a show of concern about the army’s “non-coup,” hardly mattered militarily. Air power helps little when a nation is on the brink of civil conflict.

Back in 1973, the army had more concrete goals: regaining the Sinai and salvaging damaged national pride after the humiliating defeat in the 1967 Six Day War. Having lost the Sinai Peninsula, Egyptians sulked on one side of the Suez Canal as Israel erected fortifications, dubbed the Bar-Lev Line, including towering sand berms meant to make the passage of tanks into the occupied Sinai impossible.

Egypt’s generals, bent on retaking lost territory, came up with a brilliant solution: water cannons. In October 1973, as Egyptian and Syrian forces attacked Israel simultaneously, Egyptian army engineers pushed out into the canal bearing hoses to blast the Israeli defenses.

Within three hours, they had melted away, and Egyptian tanks were soon wandering the Sinai and threatening the borders of Israel itself. When a ceasefire was agreed later that month, Egyptian troops remained in the Sinai, a fact that helped the country regain the peninsula in the subsequent Camp David Peace Accords.

Egypt’s army remains one of the largest in the world — ranked tenth largest in the world in 2013 by the International Institute of Strategic Studies. It boasts F-16 and F-15 warplanes and US-designed Abrams main battle tanks, and sends its officers to American staff colleges for advanced training.

But all the gold plated kit in the world can’t save a nation from its own demons — just ask the last commanders of any of the Soviet bloc’s vast armies. Al-Sisi’s instinct to press on toward elections and get the army back to its real job makes sense is that context.

Certainly anything as ambitious as Operation Badr would be well outside the army’s capabilities these days. In many ways corralling rampaging militants in a vast open desert can be even more difficult than direct assaults — just ask the French in Mali. But it seems reasonable to think the army should be focusing its attention there rather than on constitutional reform.

For Sisi, now a hero to secular parties, the temptation to clamp a lid on the whole mess is very dangerous. However, comparisons with 1992 Algeria, where a military government cancelled an election about to be won by an Islamist party and sparked a brutal decade of civil war, are probably overdone.

But even in Egypt, where military men have led the country one way or another for most of its post-independence history, the best place for a general and his troops is in the barracks, not in the presidential palace.

Better still, how about the Sinai? If the power vacuum in that sliver of land between Israel and Egypt gets any worse, the results could invite problems that would make Egypt’s current problems look small indeed.