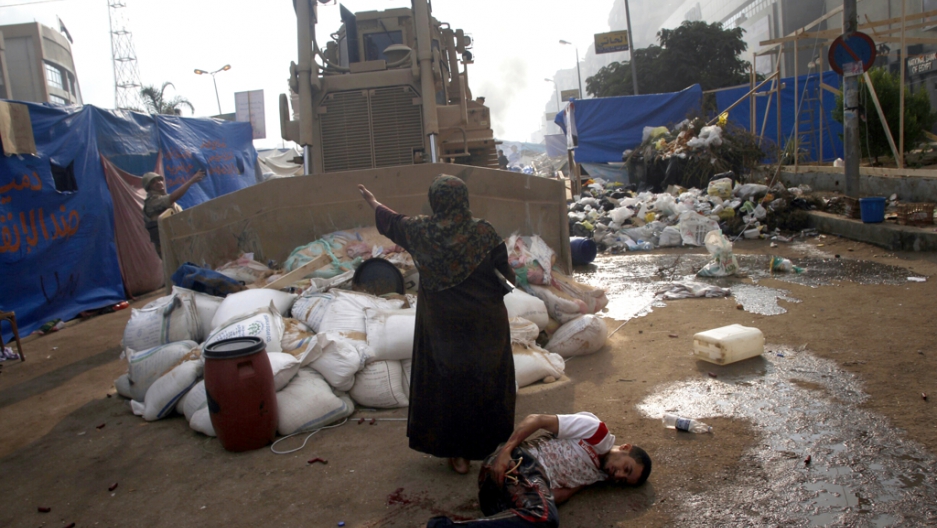 An Egyptian woman tries to stop a military bulldozer from hurting a wounded youth during clashes that broke out as Egyptian security forces moved in to disperse supporters of Egypt's deposed president Mohamed Morsi in a huge protest camp near Rabaa al-Adawiya mosque in eastern Cairo on August 14, 2013.
Credit: MOHAMMED ABDEL MONEIM/AFP
Share

BOSTON — Today's violence and chaos in Cairo is a stark reminder of the complexities of political revolution in one of the most important countries in the Middle East, to say nothing of the tricky international diplomacy that surrounds it.

To get a better understanding of how Wednesday's events in Egypt are likely to play out from Cairo to Washington, DC and beyond, we spoke with GlobalPost's senior foreign affairs columnist and former US diplomat extraordinaire Nicholas Burns.

How will US officials handle a significant news event like this? What is the process for evaluating information and preparing the right diplomatic response?

First, Washington will want the facts. The White House and State Department will lean on our embassy in Cairo to get a firsthand account of what has happened and what it means. In this case, Washington trusts the judgment of our very capable and experienced ambassador, Anne Patterson.

Third, Washington will ask others with influence on the Egyptian military — friendly Arab governments, European allies like the United Kingdom — to weigh in with Cairo and to counsel caution, patience and no firing on innocent demonstrators.

What is the likely US response to today’s events in public and behind the scenes?

Washington should be discouraged by the state of emergency [declared by Egypt’s government] and should worry that the Egyptian military is reacting too harshly and without a long-term plan to cope with a badly divided country. The military government is confronting today Egypt’s oldest, largest and best-organized political party — the Muslim Brotherhood. It is using blunt force to remove civilians who have been largely peaceful in their protests. But, the military is not offering any olive branch or long-term program that might encourage the millions of Egyptians who support the Islamist parties to believe there is a place for them in the future. The military is not presenting a credible plan to return to democratic elections, pluralism and the free involvement of all political parties. Today’s actions are short-term but carry no hope of stabilizing the country over the longer-term and addressing the deep divisions in Egyptian politics.

Does the US have the appropriate diplomatic leverage in Egypt to shape events in a way that furthers US interests in the region?

The US retains significant influence in Egypt — well, more than any other country. Washington has particularly good ties to the Egyptian military. But, American influence is not what it once was and does not compare to what we had when I served at the Cairo Embassy in the mid-1980s. Saudi Arabia, the United Arab Emirates and Kuwait have just given Egypt $12 billion with no restrictions. That far exceeds total US aid annually. In this sense, Washington is no longer the only game in town. But the US will want to safeguard the influence it does have with the military due to our vital interests in Egypt itself. Good relations with Cairo are critical for maintenance of the Camp David peace agreement between Egypt and Israel, for Egypt’s help on counterterrorism in the region and to assist in blocking Iran’s ambitions for power in the Middle East. Washington will work very hard, as it should, to preserve American ties with the Egyptian government.