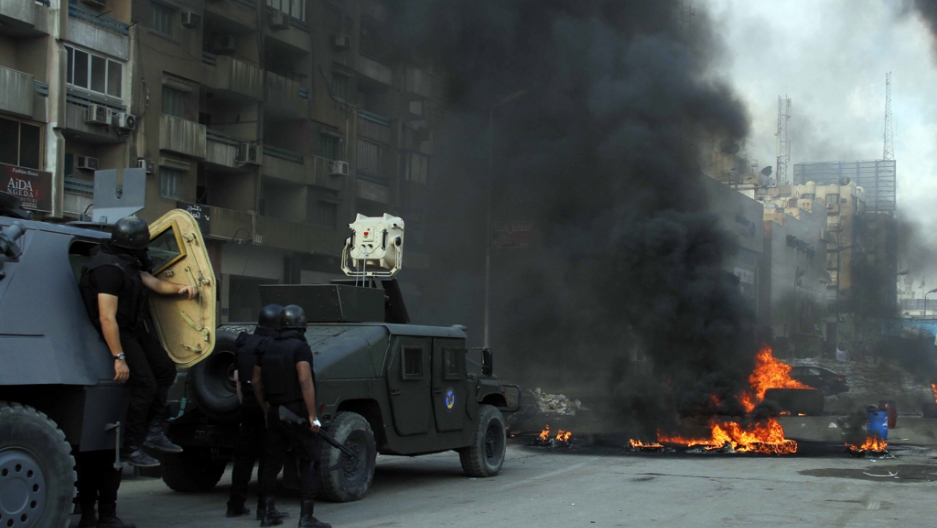 CAIRO, Egypt — They waited weeks for it to happen.

The thousands gathered in Cairo’s Rabaa al-Adaweya Square, a sprawling tent city of camped out supporters of former President Mohamed Morsi, knew security forces would finally move in to break up their weeks-long sit-in.

But on Wednesday morning at 7 a.m., the attack still came with little warning. Police and army troops suddenly surrounded Rabaa — and another smaller sit-in at Nahda Square, across town — with armored personnel carriers and bulldozers, sealing off the exits and firing birdshot, tear gas and live ammunition into the crowd.

Government snipers have continued to pick off civilians and protesters from nearby rooftops as the battle rages into the afternoon, eyewitnesses say. And the camp’s makeshift field hospitals are running out of space for the dead and wounded.

By midday in Cairo Wednesday, dozens were killed, and the violence had spread elsewhere in the Egyptian capital and to rural areas across the country where pro-Morsi demonstrators clashed with police or other civilians.

The Rabaa encampment that Morsi’s Muslim Brotherhood movement had transformed into an alternative mini-city — with communal kitchens, electricity and even playgrounds for children — became an unimaginable scene of chaos and death.

"We are ready for another attack. But if they come, many people will die,” Mostafa El Eman, an informal security guard who helped man the perimeter, told GlobalPost from Rabaa on Sunday night.

Earlier that day, security officials had leaked to several news outlets that police were preparing to storm the camps before dawn. Protesters prepared for the worst.

As midnight approached, Morsi loyalists streamed past the sandbag-lined barricades, which security forces later breached with ease. The demonstrators held up ID cards and copies of the Quran, a sign to security guards that they had come to defend their Islamist leader.

But tension was etched on their faces.

Demonstrators had hunkered down in two of Cairo’s main squares to demand Morsi’s reinstatement, after a combination of mass street protests and an army takeover swept him from power on July 3.

Many of the demonstrators stayed in the squarese for the Muslim holy month of Ramadan, fasting all day in the summer heat.

Others witnessed the deaths of their friends, relatives and colleagues in battles with the army and police. Two previous altercations between protesters and police and army soldiers since July left more than 140 Morsi supporters dead, the majority of whom were shot by security forces.

Inside the camp Sunday night, with news of an imminent dispersal, crowds gathered around a projector that live-streamed video of the sit-in, with a view of where police would eventually move in.

As the hours passed, a sense of defiance prevailed.

“We’ve heard rumors, but I’m not worried,” Wafaa Hefny said as she walked through Rabaa’s labyrinth of tents — many of them now destroyed — that acted as temporary homes.

“We’ve increased our security measures, of course, but I’m more concerned with the here and now,” Hefny said. “I’ll show my strength as a supporter of President Morsi by living here, sleeping here, and showing that it’s ours.”

When dawn broke Sunday and no crackdown had materialized, demonstrators emerged from their tents relieved they had survived another night.

Mohamed Sayeed was in a buoyant mood as he watched his friends play football on a road between two of Rabaa’s barricades Monday morning.

“Every day we stay here is another day we move closer to our goal of bringing back Dr. Morsi,” Sayeed said. Morsi received his doctorate in material engineering. “We saw last night as a battle with the government, and now you see that we have won."

But just 48 hours later, images from live streams would show scenes of pandemonium where Sayeed had stood, with scores of injured and protesters trapped by police cordons. Thick black plumes of smoke would rise over the square.

The military-backed presidency declared a month-long state of emergency across the country Wednesday, granting the army arrest powers and a mandate to help police restore order.

As the death toll rises into the hundreds, Sayeed’s fate is unknown.