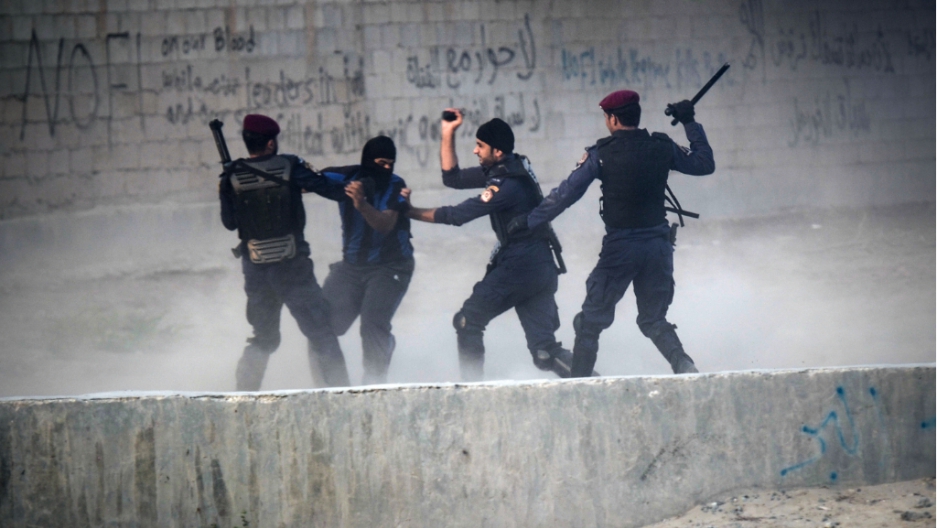 Bahraini police force arrest a protester during demonstration against the ruling regime in the village of Shakhora, west of Manama, on August 14, 2013. Bahraini police headed off a protest against Gulf kingdom's Sunni rulers that the Shiite-led opposition activists called for near the US embassy in defiance of a ban. The police deployment prevented protesters from reaching the spot designated by the Bahrain Rebellion Movement, Tamarod, for the main rally outside the US embassy in the capital Manama.
Credit: MOHAMMED AL-SHAIKH
Share

Police clashed with protesters in Bahrain's Manama on Wednesday, arresting at least 20 people, according to the Associated Press.

Reuters said security forces resorted to tear gas and fired bird shot in a bid to disrupt demonstrations, which have been intermittant but ongoing in Bahrain for months.

The Gulf kingdom, a key ally of the United States, is a Sunni monarchy with a Shiite majority.

The unrest there is seen as part of a political groundswell that gave rise to the overthrow of longtime leaders in Tunisia and Libya several years ago.

In Manama, protesters took their frustrations to wealthy areas of the city, said the AP, some even calling on shop-owners to stop work and join a labor strike in solidarity.

Bahrain's authorities had warned they would "forecefully confront" the marches planned for Wednesday, which was also the 42nd anniversary of the island kingdom's freedom from British rule, said the AP.

Many see developments in Bahrain as part of a greater struggle for power between regional heavyweights like Iran and Saudi Arabia, a fight from which Bahrain's opposition has sought to distance itself.

The Manama-based Bahrain Center for Human Rights said "large amounts of tear gas [were] used to disperse anyone gathering on the streets," according to Al Jazeera.

"We don't care if they fire tear gas," protester Fatma Jaber told the AP. "We are used to it. We are proud that we have succeeded in shutting down the country."