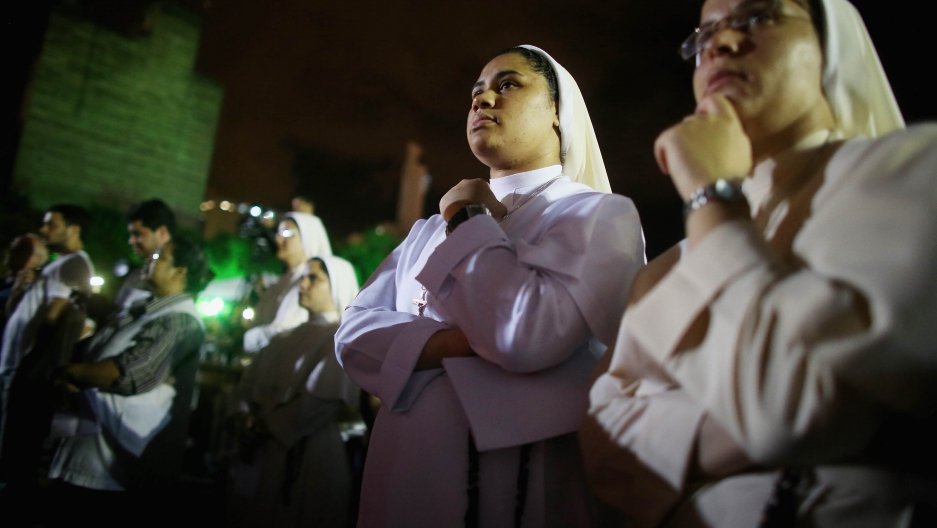 Catholic nuns look on following a Good Friday procession after mass at the Metropolitan Cathedral in Rio de Janeiro, Brazil. Pope Francis is the first pope to hail from South America, with Brazilian Catholics set to receive the pontiff during his visit to Brazil in July for a Catholic youth festival. Brazil has more Catholics than any other country.
Credit: Mario Tama
Share

The papal transition from Benedict to Francis has been a rare spectacle on the global stage. With the retirement of the austere, shy German pope engulfed by scandals, the Argentine successor took up quarters at a religious residence in the Vatican, eschewing the Apostolic Palace. Biding his time on root changes, Francis endorsed “a church that is poor, and for the poor,” renouncing clerical privilege, maintaining a respectful silence on the last two popes’ obsession with obedience to church authority.

The result has been meteoric popularity for Francis in Europe, where comparatively small numbers of Catholics attend Mass; quickening interest among scandal-numbed Catholics in America, where roughly a third are churchgoers; and a greater impact in Latin America, though to what end is unclear.

The size and fervor of crowds on Francis’s trip to Brazil suggest his potential appeal to reinvigorate Catholicism against the tide of Pentecostal churches that carry support of about 25 percent of Brazilians. But media events and symbolic language must give way to governing, how the slow wheels turn in the Roman Curia as officials gauge which way real change is blowing.

Case in point: the Leadership Conference of Women Religious, the group of superiors representing 80 percent of American nuns, which is holding a semiannual convention in Orlando, Florida on Tuesday through this weekend.

Many religious communities represented in LCWR have long records of missionary involvement in Latin America and India; the leadership was jarred last year when Cardinal William Levada, as outgoing prefect of Congregation for the Doctrine of the Faith, accused the group of being radical feminists and ordered them into a religious receivership.

Seattle Archbishop Peter Sartain is the “delegate” or designated overseer of the group, and is present in Orlando.

“It is not lost on any of us that Sartain had his problem,” a sister, speaking on background, told GlobalPost.

As bishop of Joliet, Illinois, Sartain ordained a man in 2009 just six months after he was discovered with computer pornography which did not depict youths.

He was not indicted. In January 2010, the priest was arrested for molesting a boy and pled guilty that September, the same month Benedict promoted Sartain to archbishop of Seattle.

“People see him as a company man,” Syracuse University Professor Margaret Susan Thompson, a historian of religious life, told GlobalPost. “He has a sister in the Nashville Dominicans and has celebrated Masses for them. They are one of the religious orders held up by conservative Catholics as what nuns should be — wearing full habits, living as nuns did in the 1950s ... People are going to Orlando, not sure what to expect.”

Sartain has given few clues on how he will enforce the order from Benedict’s papacy to draw LCWR into line with the Vatican’s theological office.

LCWR President Sister Florence Deacon, a historian, spoke recently at a conference on History of Women Religious in Minneapolis-St. Paul. Says Thompson, who also attended: “She said they’ve lived the last year in a state of shock, and that they are deliberately not trying to conduct a campaign in the press. But she’s like most of the women who have said that there is a point beyond which they will not concede.”

Days after becoming pope, Francis told the CDF to continue the doctrinal assessment of LCWR; however Cardinal João Braz de Aviz, a Brazilian who oversees the Congregation that governs religious orders, has criticized the CDF — and, by implication, Levada, who has retired in California — for taking a punitive direction against the nuns’ group without his office’s involvement.

Braz de Aviz gave an 80-minute talk in May to an audience of International Union of Superiors General in Rome, which National Catholic Reporter will be publishing in installments starting Thursday. An NCR report yesterday by Joshua McElwee and translator Biagio Mazza offers a rare picture of a cardinal maneuvering in the complex, changing Vatican climate under Francis.

He continued: "Throughout history, we have had many difficulties in this area. History became a primarily masculine enterprise. For many reasons – political, anthropological — this mode also dominated religion.”

As self-evident as these thoughts may seem to a Western intellectual mainstream, De Aviz was speaking in an extraordinary way for an official in the Vatican, where many cardinals see “feminism” as an enemy of the church and something to be battled. Levada clearly held that view in 2012, even distorting the essence of a lecture by scriptural scholar Sister Laurie Brink, selectively culling of quotations out of context to make it seem an attack on the male hierarchy, which it was not.

Braz de Aviz cast his thoughts in a striking moral vocabulary. “Obedience and authority need to be re-visioned. An authority that commands kills. An authority that serves generates life. An obedience that merely copies what the other says infantilizes, makes us less human."

He even seemed to champion the kind of theological thinking that so disturbed Levada and Sartain, by encouraging research into the buried history of women in church: "If it is a biblical and theological reflection, it should be of great value. We need to proceed ahead. Have no fear. We need to converse even more about this." As discussions proliferated about what Aviz’s words mean in the internal politics of the Vatican, Sister Christine Schenk, of Cleveland, told GlobalPost: “His words are true to my experience of religious life and why I have no fear about the future even though we are in difficult times. He acknowledges the great need for dialogue and openness.”

But, she says, the latter part of his reported comments in which he states that there is no conflict between his office and the CDF are paradoxical, a kind of ‘which is it?’ message.

“You can’t say women are equal and together with men in the image of God, and systematically exclude them,” says Schenk, a founder of the group FutureChurch. “We either change canon law so decision making rests with all the baptized, or we ordain women. My vote is for the former ... and the latter will naturally follow.”

GlobalPost Vatican correspondent Jason Berry, is author of “Render Unto Rome: The Secret Life of Money in the Catholic Church,” which received Investigative Reporters and Editors 2011 Book Award.