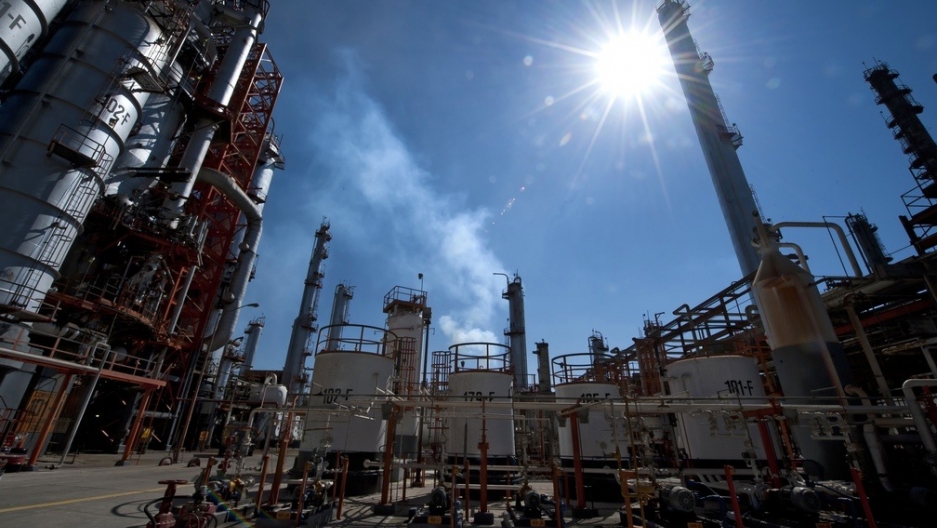 MEXICO CITY, Mexico — President Enrique Peña Nieto on Monday called for constitutional changes to open Mexico's moribund petroleum and electricity industries to private investment for the first time in 75 years, while keeping a national grip on the resources themselves.

“It's clear that if we do nothing with relation to energy in Mexico we run the risk of stalling and not growing," Peña Nieto said in a televised speech from the presidential compound, Los Pinos. Touting the proposed reform as economically crucial, he added, "We will make the energy sector one of the most powerful motors of the national economy.

“This is the first step in making a 21st century energy industry,” Peña Nieto said.

The president's proposal would allow the iconic national oil monopoly, Pemex, to form joint ventures with private companies to explore for and produce oil and gas. But companies entering into such “risk contracts” would be paid with cash rather than with a share of the petroleum, something that may prove unattractive to the major international oil companies that Mexico hopes to entice.

The administration's plan would ease Pemex's heavy tax burden, which claims more than 70 percent of Pemex's income and supplies about a third of Mexico's national budget, by raising revenue elsewhere and restructuring tax obligations. Outside investment would be allowed in pipelines, refineries and other “downstream” petroleum businesses.

“At all times the possession of the resources will be in the hands of the state,” Energy Minister Pedro Joaquin-Coldwell told GlobalPost and other foreign media after Peña Nieto's speech. He said the model the government has chosen is similar to that used in Iran, Bolivia, Ecuador and Iraq.

Reform proponents contend that Pemex has neither the technology nor the money to explore in the ultra-deep waters of the gulf, near US territorial waters, where the country's most promising oil reserves lie. Without many billions of dollars in private energy investment, they say, Mexico will become an importer of crude oil in just a few years.

“We require capital, technology and knowledge,” Peña Nieto said in his speech, promising that Mexico's oil production can be increased to 3 million barrels a day within five years. “We must make [partnerships] with those who have them.”

Mexican and foreign companies already perform much of the well drilling and other production under contract with Pemex. Peña Nieto's proposal would let the companies reap greater rewards while accepting bigger risks.

Peña Nieto also proposes to allow private companies to play an increased role in generating electricity, marketing it across power lines owned by the the government's Federal Electricity Commission. Private companies like steel plants already produce a third of Mexico's electricity, Peña Nieto said, but only for their own use.

“There will be a greater supply of electricity at a lower cost to [the] benefit of all customers," the president said.

That's likely a welcome promise for consumers besieged by high electricity prices. But the changes aimed at the oil industry will spawn bitter debate in coming months.

Mexico's petroleum industry has been a touchstone of Mexican pride since President Lazaro Cardenas nationalized it in 1938, in angry defiance of foreign oil companies.

Peña Nieto argued Monday that his reform proposal would recapture the original intent of Cardenas' nationalization while rejuvenating Pemex.

With nearly 14 billion barrels of proven reserves, Mexico has the third largest deposits of recoverable oil in Latin America, after Venezuela and Brazil. In addition, Mexico ranks fourth or fifth in the world for shale gas reserves, according to the US Energy Information Administration.

Most of Mexico's shale gas, meanwhile, lies in fields near the Rio Grande, on the north side of which private companies have drilled thousands of producing wells in the Eagle Ford area of South Texas.

Arguing Monday that Pemex urgently needs to modernize, Peña Nieto pointed out that Mexico as of last year had issued just a handful of drilling premits in its shale gas fields, compared to some 9,100 in the United States.

Peña Nieto aides say they're confident they can muster the necessary congressional votes to usher in new energy policies under the nine-month-old Pact for Mexico, in which the country's three largest political parties have agreed to cooperate on labor, education and other reforms. But the energy reform will prove the most important and contentious to date.

Peña Nieto's proposal will be sent to the senate on Wednesday, and congress will take up the issue after reconvening in regular session September 1.

The conservative National Action Party, which lost the presidency to Peña Nieto last year, has meanwhile proposed far more radical reform that would award outright concessions to private companies rather than risk contracts.

Yet anything that smacks of privatization is unacceptable to the leftist Democratic Revolution Party, whose candidate came in second to Peña Nieto in a three-way race. The party's leadership rejects any constitutional changes and argues that merely lightening Pemex’s fiscal burden will provide it with the financial ability to find and produce more oil and gas.

Though they are bickering over its details, leaders of National Action and Peña Nieto's Institutional Revolutionary Party, or PRI, together can muster the congressional votes to pass some sort of energy reform.

But if they ram the changes through, the two parties could well lose the battle for Mexican public opinion.

Nationalist Andres Manuel Lopez Obrador, who left the Democratic Revolution Party to found his own movement after losing to Peña Nieto last summer, has called for peaceful street protests against Peña Nieto's proposal beginning September 7. He's called those pushing for the reforms “traitors” to the Mexican nation.

“They want the hen that lays the golden eggs,” Lopez Obrador said of the private interests seeking access to Mexican oil, in a video released Monday. “That's something we can't permit.”