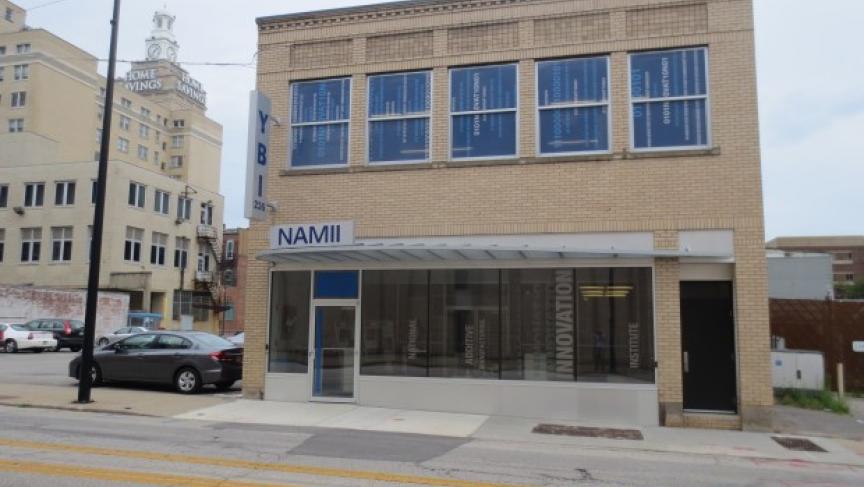 President Obama has been pushing this summer for middle class jobs. One cornerstone of his plan is creating more manufacturing work. The United States has lost about a third of its manufacturing jobs since 2001, many to foreign competition.

To help stem this, the president is touting the idea of regional "manufacturing hubs." He mentioned the pilot program during this year's State of the Union.

"Last year, we created our first manufacturing innovation institute in Youngstown, Ohio. A once-shuttered warehouse is now a state-of-the art lab where new workers are mastering the 3D printing that has the potential to revolutionize the way we make almost everything. There's no reason this can't happen in other towns."

The president wants to create up to 44 more manufacturing hubs over the next decade. The idea is based on a German model that partners government, academia, and industry to create regional centers of expertise.

I visited the US pilot program in Youngstown, which opened last September, to see how things are progressing. Youngstown sits halfway between Cleveland and Pittsburgh in the heart of the Rust Belt. The small city of 65,000 has lost nearly two thirds of its population since the 1960's.

"I had a front row seat for that," said Michael Garvey, who was raised in the area and now runs a small engineering company, M-7 Technologies.

Garvey came back to Ohio, after a brief run on Wall Street, to save the family farm, as he calls it, a bronze foundry. He's since morphed the business into a design and manufacturing firm.

Garvey is hoping to morph it further into a leader for 3D printing, among other offerings, by taking advantage of Youngstown's new resources at the recently-opened manufacturing institute, the one President Obama mentioned.

The institute, called NAMII – an acronym for the National Additive Manufacturing Innovation Institute – is a former downtown furniture warehouse built in the 1930's that long sat vacant. It's nothing spectacular from the outside.

Inside, Industrial engineer Darrell Wallace, NAMII's deputy director for workforce and educational outreach, showed me some of the 3D printers.

"This is actually a series of little print heads, very similar to like an ink jet printer, depositing little droplets of wax, and building them up layer by layer to create the three dimensional form," said Wallace.

Other "printers" can build things from nylon, polymers, or metal using lasers.

Basically, a designer comes up with an idea on a computer, hits prints, then a few days, or even hours, later, there you go: it's in your hands.

Wallace showed off some of the things they've built: statues, pipes, and toys. He held a "brain gear" in his hand.

"You can see the level of intricacy that we can achieve," said Wallace. "This brain gear has 12 gears sitting on a frame, you'll notice that they all move. What makes this interesting is that these moving parts were not assembled. They weren't produced separately and put together, they were actually made this way at the same time."

If you can think it, you can build it, and do it right here in the United States.

"So the same benefit of being able to produce it and have it quickly keeps it local," said Wallace.

3D printing isn't well suited for large-scale manufacturing. It doesn't make economic sense to build 10,000 widgets one by one. So the new technology won't bring back too many manufacturing jobs from overseas.

But architects and interior designers are really excited about it. They can print model buildings.

The military is invested in it. Consider a Navy ship with a broken pipe, or whatever. With a 3D printer on board, they can print out whatever part they need right at sea.

But while the possibilities are essentially unlimited, engineers like Martin Abraham – dean of the college of science, technology, engineering and mathematics at nearby Youngstown State University – explains the catch.

"The reality is all new technology and its impact in the marketplace is based on economics. Government funds the basic fundamental research, industry funds stuff when they think it is close enough that they can make a profit, nobody funds that stuff in the middle."

Abraham helped write the winning bid to fund the stuff in the middle – $30 million from the federal government – to launch the pilot program in Youngstown. Local universities, companies, and governments chipped in another $40 million.

If Youngstown succeeds, the president could get his wish, and funding from Congress, for more manufacturing hubs. So far, only a handful of jobs have been created in Youngstown. But it's early days, and Abraham said the emotional lift after hearing Youngstown mentioned in the State of the Union has already given this town a boost.

"It was one of those woo-hoo types of responses. I mean, it felt great. Youngstown, Ohio, there we are. It really doesn't get much better than that."

Others in the community echoed that sentiment.

"The number of phone calls, texts, and Facebook announcements that came through was just incredible, that this community has gone from kind of being the poster child for being down and out, to being part of the president's state of union address," said Barb Ewing, chief operating officer at the Youngstown Business Incubator. "It was really just such a significant emotional event."

Ewing said she hopes the Youngstown manufacturing hub will transform Youngstown into an epicenter for 3D manufacturing, attracting workers and start-ups from around the world.

It's likely that President Obama first got the idea for the Youngstown manufacturing hub, and a national network of hubs, from the Germans. Or rather, Rob Atkinson, president of the Information Technology and Innovation Foundation in Washington, got it from the Germans and passed it along to the White House.

Atkinson said German manufacturing companies, who participate in the "Fraunhofer" system, understand the benefit of working together, and in partnership with the government and academia, to develop new technologies.

"When you talk to German companies, there's a view over there, it's almost like if you're in an industry you're expected to be part of that system, almost like a social obligation," said Atkinson.

"The auto companies, they're all in the Fraunhofers that relate to automotive technology, for example. The chemical companies they're in the Fraunhofers that relate to chemical process innovation. There's no real free ride problems over there, everybody see this as: If we all do this together, we're all going to be better players in the global marketplace because we're going to be more sophisticated and technologically advanced."

A bipartisan duo of senators, Democrat Sherrod Brown of Ohio and Republican Roy Blunt of Missouri, have also apparently bought into the German model and recently introduced legislation to support a national network of public-private manufacturing hubs. A separate bipartisan proposal was introduced in the House.

"The federal partnership in Youngstown is a perfect prototype, almost a teaching hospital construct, where once you put that in place with that federal partnership, you'll see other things grow out of it," said Senator Brown in a phone interview.

"Sometimes they (new industries) sprout up by themselves, but usually there's a great university, or community college that's in partnership training, or an entrepreneur that's worked with an existing business. The federal role is to sort of grease that in a way that success is much more likely."

The president's wish for a network of 45 manufacturing hubs is a decade-long vision. In the near-term, the White House has announced a competition for three more manufacturing hubs with a commitment from the federal government of $200 million.