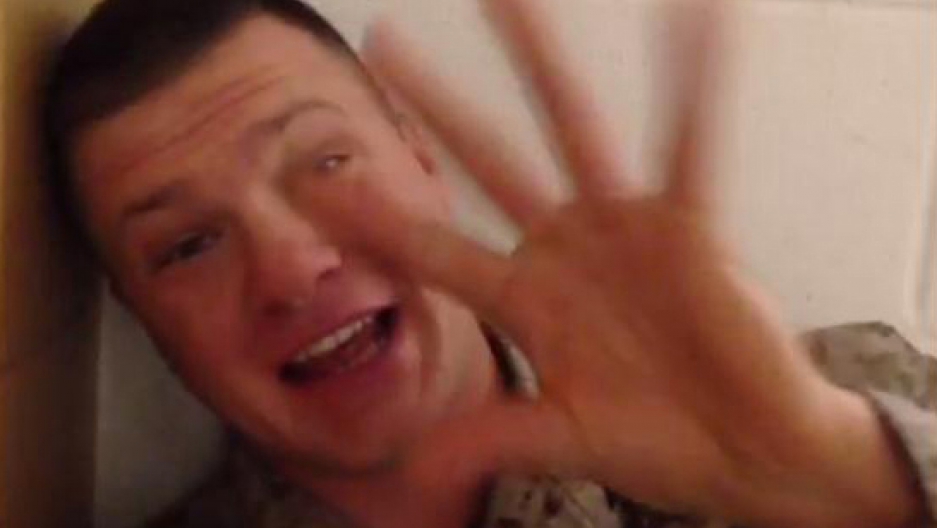 Marine Tim Pierce was featured in a Vine produced by U.S. forces in Afghanistan who were doing what they often do: waiting.

In six seconds you can unwrap a piece of gum, perhaps tie your shoes — or make a very short movie.

That’s the premise of Twitter’s video app, Vine — recording video and audio for no more than six seconds. Since the platform launched earlier this year, millions of users have uploaded short jokes, jingles, and brief glimpses into life’s mundane moments.

Watch vines featured in this story at Studio360.org.

Like Twitter, Vine has created a new class of celebrities. Among them is Nicholas Megalis, who has produced some of the most popular vines in the medium’s short history.

More than two million fans have watched Megalis perform comical songlets while he wears shoes on his hands, or brushes his teeth, or stuffs gummy worms into his wallet. But Megalis says Vine is about much more than comedy.

“You can be funny on it, but really, you can do whatever you want," he said.

Given its incredible simplicity, Vine has also opened the door of filmmaking to anyone with a smartphone.

“You can tell a good joke in six seconds, you can scare someone half to death, and you can be incredibly creative in six seconds,” said Genna Terranova, the director of programming at the Tribeca Film Festival. Soon after Vine launched, Tribeca hosted the first six-second film competition.

“We just saw an opportunity to see how people were telling stories with technology. And as people adapt to tools they become more professional at them. So the quality and the variety (are) increasing,” Terranova said.

Michael Cameron, an American soldier stationed in Stuttgart, Germany, served in Bosnia and has done four tours in Afghanistan. He recently began making vines that give snapshots of military history around his base.

“You get a lot of disconnect between civilians and soldiers,” Cameron said. “When you can get a little insight into what they do on a daily basis, it adds a little humanity.”

Turns out there is a whole subculture of vines created by American soldiers. Most of the movies capture the mundanity of their daily lives — which amounts to a lot of waiting.

“Being deployed has its downtime and there’s a lot of it for a lot of guys,” Cameron said.