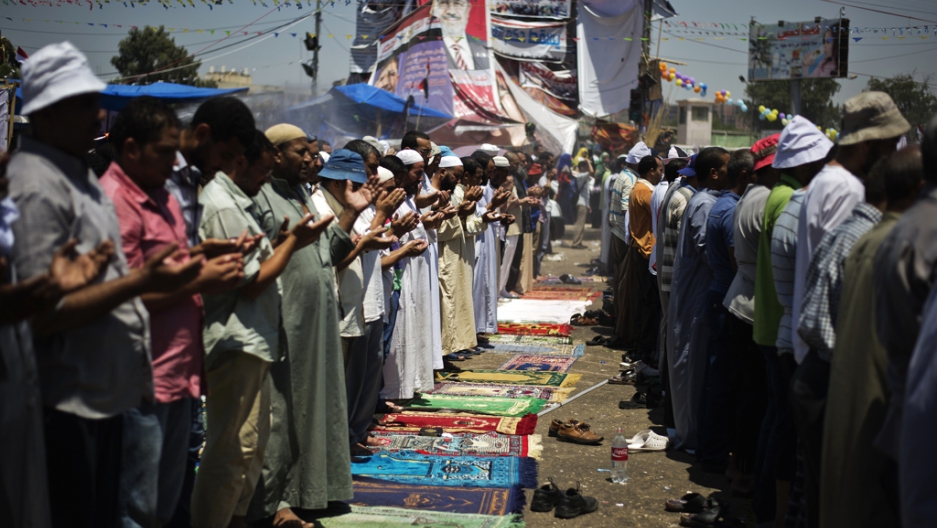 Members of the Muslim brotherhood and supporters of ousted Egyptian President Mohammed Morsi perform noon prayers at a pro-Morsi sit-in outside the Rabaa al-Adawiya mosque on the first day of Eid al-Fitr celebrations on August 8, 2013 in Cairo.
Credit: GIANLUIGI GUERCIA/AFP/Getty Images
Share

CAIRO, Egypt — The thousands of supporters of ousted President Mohamed Morsi camped out at protests across Cairo are becoming increasingly defiant as their standoff with the new military-backed government intensifies.

Many of the protesters staging sit-ins at the two sprawling encampments say they are willing to die in order to see Morsi, a Muslim Brotherhood leader, reinstated as the country’s legitimate president.

Even as their Islamist representatives are reported to have at least nominally entered into negotiations with political foes this week, pro-Morsi demonstrators say either they do not believe their leaders would “betray” them by starting talks or that they reject any compromise outright.

“When we read of these talks, we don’t believe them,” businessman Essam Sayed said from the pro-Morsi demonstration outside Cairo’s Rabaa al-Adaweya mosque.

“We trust our leaders and know they wouldn't compromise on our demands. They wouldn't sell us out like that,” he said.

The heightened rhetoric — following the massacres of roughly 140 Morsi supporters by security forces in two separate incidents in July — is raising concerns that Brotherhood leaders will ultimately be unable to control the radicalizing crowds they deployed to pressure the new government.

Continued threats from officials that police are preparing to disperse the protests is also contributing to fears Egypt will tumble further into a spiral of violence.

Diplomats from several countries, including the United States, arrived in Cairo this week to help seek an end to the crisis, which has seen more than 300 people killed since the military deposed Morsi July 3.

More from GlobalPost: With more bloodshed in Cairo, the Muslim Brotherhood remains defiant

The international efforts to mediate reportedly collapsed Wednesday, following a flurry of media leaks that everything from Morsi’s exile to fresh cabinet posts for Brotherhood leaders was on offer.

But that is unlikely to satisfy protesters who say they will settle for nothing less than the leader’s return to office.

The army said it was forced to unseat Morsi after millions of Egyptians turned out to demonstrate against the president on the anniversary of his inauguration June 30.

Defense Minister Gen. Abdel Fattah al-Sisi appeared on television to announce the coup on July 5, sending tanks into the streets and ordering the arrest of dozens of Muslim Brotherhood officials, including Morsi.

Since then, tens of thousands of Morsi supporters have populated at least two public squares as permanent, pro-Morsi demonstrations, sometimes escalating their protests by marching along Cairo's busy highways and bringing them to a standstill.

At Rabaa, in northeast Cairo, the sense of isolation and the constant specter of violence have hardened the position of many demonstrators. Many have been have spent the entire month of Ramadan there, fasting from dawn to dusk while enduring the stifling heat.

“Being here has taught me what it is to be human,” Mohamed Mohamady Abdel Rabo, a Morsi supporter, said. He sat under a blue awning that stretches across the sit-in, offering shade from the blaring Cairo sun.

More from GlobalPost: GlobalPost investigation: a massacre in Cairo

The sit-in has morphed from a makeshift camp into a cramped alternative community. Much of the food is cooked communally, and amateur security guards work in shifts to defend the perimeter, dressed in hi-visibility jackets and carrying large sticks to ward off attacks.

“Knowing the righteousness of my goals gives me the energy to survive the threats and the massacres,” Rabo said. “This is not something we can negotiate our way out of.”

The toughening opinion on the streets will likely make it even more difficult for Islamist leaders to clinch a negotiated political settlement in the future.

According to Shadi Hamid, director of research for the Brookings Doha Center, a think tank: “It would be very difficult for negotiators to go to Rabaa and announce a deal. They'd be shouted out."

“A lot of these demonstrators have friends or relatives who have been shot dead and they've been hardened by what's happened over the past month,” Hamid said. “They’re unlikely to accept a deal easily.”

Not only are emotions high, but other more conservative religious groups have also joined the protests. The Brotherhood is an 80-year-old grassroots organization known for its mobilization and discipline, but wields little control over the more extremist fringe.

“The Brotherhood could probably impose discipline on its own members if push came to shove,” Rabo said. “The problem is that they are unlikely to make other groups fall in line.”

One of member of the hardline al-Gama'a al-Islamiyya movement — a former terrorist group — says he will “hold his ground” at the demonstration, even if he has to die.

Other protesters, the majority of whom do not belong to Islamist groups like al-Gama’a, also mention martyrdom when speaking of their political resolve.

“The military have given us no choice but to offer our sons as martyrs for the cause they stole from us,” said Mona Ismail Emad, an engineer and Brotherhood member.

Emad’s daughters clamber around her as she speaks, playfully fanning their elders with a poster of the ousted president.

In a new report, the Brussels-based International Crisis Group says the Brotherhood is “closing ranks [and] banking on a war of attrition.”

Negotiations indeed made little headway. But if the two sides do reach an agreement, the trust that this diverse group of Islamists has put in their leaders is likely to be deeply damaged.

“Even if the Brotherhood struck a deal and told us to go home, they couldn’t control what happens here,” Sayed, the pro-Morsi businessman, said. “Lots of other parties have joined our number and we’ve all agreed on our common goals. Those are the only terms we'll consider.”