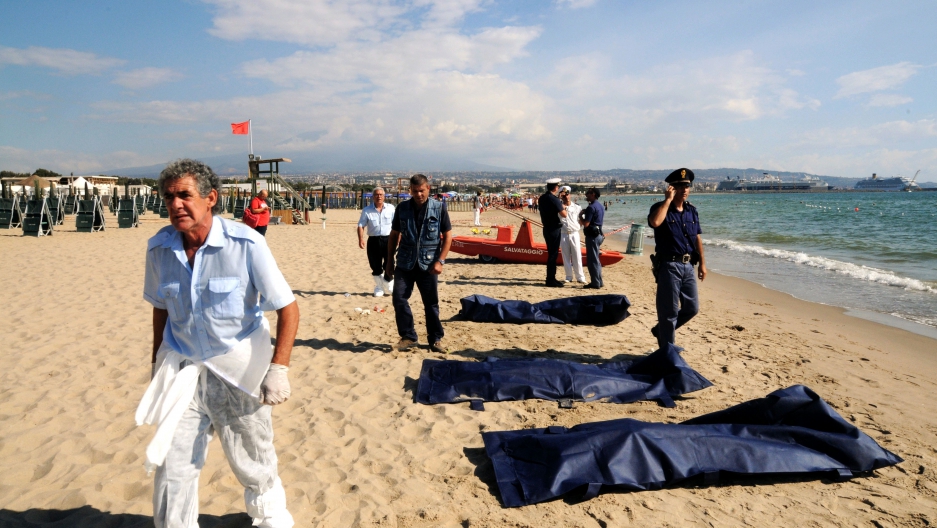 Police and rescuers stand by the bodies of immigrants on a beach of the Sicilian city of Catania on Aug. 10, 2013. The bodies of six migrants from Africa were found on the beach while nearly 100 others, thought to be Syrians and some Egyptians, were rescued in the latest desperate attempt to reach Europe.
Credit: DARIO AZZARO
Share

Six migrants from Africa drowned after a fishing boat bound for Italy ran aground off the coast of Sicily on Saturday, forcing those aboard to swim for shore.

The boat carrying an estimated 120 migrants ran aground at dawn just over 130 feet from a beach near the city of Catania, Italian Coast Guard Capt. Roberto D'Arrigo told Reuters.

While most were able to reach the shore, those who drowned could not swim.

An adolescent boy was among the victims, all of whom were under age 30, D'Arrigo said.

The migrants were reportedly from Egypt and Syria.

Thousands of immigrants seek refuge on the southern shores of Italy each summer, when the Mediterranean Sea calms enough for small boats from Libya or Tunisia to make the dangerous crossing.

Some 7,800 illegal migrants and asylum seekers landed in Italy the first half of this year, according to the United Nations.

Last year, nearly 500 people were reported dead or missing at sea in attempts to reach Europe from the Middle East and North Africa.