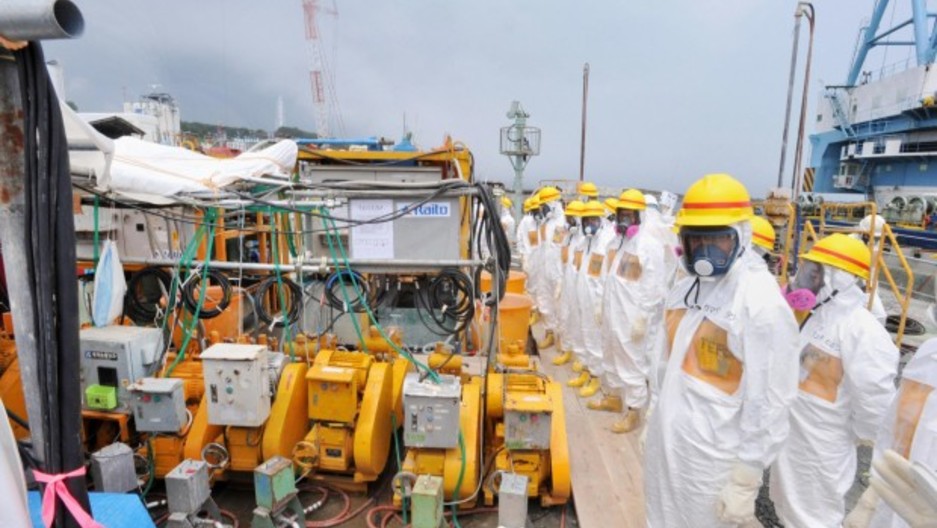 Members of a Fukushima prefecture panel, which monitors the safe decommissioning of the nuclear plant, inspect the construction site of the shore barrier, which is meant to stop radioactive water from leaking into the sea, near the No.1 and No.2 reactor building of the tsunami-crippled Fukushima Daiichi nuclear power plant in Fukushima, in this photo released by Kyodo August 6, 2013. Highly radioactive water seeping into the ocean from Japan's crippled Fukushima nuclear plant is creating an "emergency" that the operator is struggling to contain, an official from the country's nuclear watchdog said on Monday. Mandatory Credit. REUTERS/Kyodo (JAPAN - Tags: DISASTER BUSINESS POLITICS CONSTRUCTION HEALTH) ATTENTION EDITOR - FOR EDITORIAL USE ONLY. NOT FOR SALE FOR MARKETING OR ADVERTISING CAMPAIGNS. THIS IMAGE HAS BEEN SUPPLIED BY A THIRD PARTY. IT IS DISTRIBUTED, EXACTLY AS RECEIVED BY REUTERS, AS A SERVICE TO CLIENTS. MANDATORY CREDIT. JAPAN OUT. NO COMMERCIAL OR EDITORIAL SALES IN JAPAN - RTX12BQB

Japan's nuclear regulatory agency has declared an emergency over radioactive water flowing into the ocean from the damaged Fukushima Daiichi nuclear power plant and the government has stepped in for the first time to take a direct role in fixing the problem.