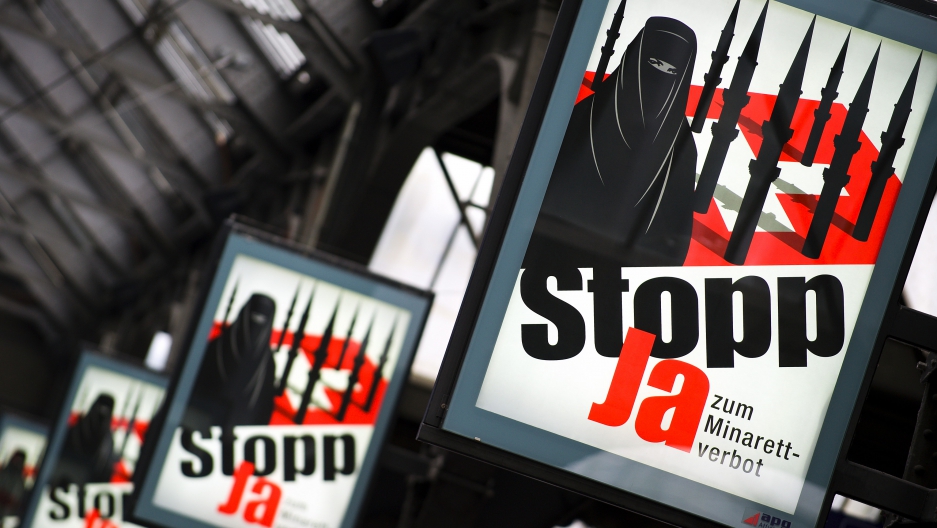 Campaign posters of the far-right Swiss People's Party depicting a woman wearing a burqa against a background of a Swiss flag upon which several minarets resembling missiles reading in German 'Stop - Yes to ban of minarets' are pictured on October 26, 2009 at the central station in Zurich. Switzerland's Commission Against Racism said that the anti-minaret poster campaign defamed the country's Muslim minority and could threaten public peace.
Credit: Fabrice Coffrini
Share

Oprah Winfrey claims to have been a victim of racism while shopping at a mall in Switzerland. Although the Swiss Tourism office was prompt in issuing an apology to Oprah, the event brings into question a trend of hostility towards foreigners in Switzerland.

The country recently voted to maintain restrictions placed on asylum seekers last June, eliminating military desertion as a reason for asylum and the ability (unique in Europe) to apply through Switzerland’s embassies.

The not-so-neutral rules add to a law first implemented in 1981, which has been periodically amended to increase limitations on foreigners seeking refuge in Switzerland.

Some towns want to segregate asylum seekers to live in designated areas—often old military barracks—and limit their ability to leave the compounds outside the hours of 9 a.m. to 5 p.m. They even seek to prevent asylum seekers from entering public spaces, such as pools, soccer pitches, libraries and retirement homes.

Opponents of the legislation—which passed with an overwhelming majority—deride the restrictions as unfair.

What's more, it may be overreaching.

According to human-rights advocacy group Human Rights Watch: “Under international law, Switzerland must formally justify any prohibition on free movement as the least restrictive measure necessary to protect national security, public order, or public health. In addition, any such policy may not discriminate between Swiss citizens and foreign nationals.”

The Swiss People’s Party (SPV), which supported the new measures, pushed for a constitutional referendum to ban minarets in Sweden in 2009. The referendum passed with over 50 percent voting in favor, but another attempt supported by the SPV, criticized in a report by Amnesty International, to outlaw full-face veils failed.

So where did all the anti-immigrant sentiment arise from?

Switzerland experienced a rise in refugees during the Kosovo conflict in 1999, but declined during the proceeding decade. The number of asylum seeker dropped precipitously this year, after rising sharply the wake of the Arab Spring uprisings.

Many Swiss fear a coming influx of immigrants, particularly from the Muslim world, for economic reasons, and also harbor widespread anti-Muslim feelings. The SVP has been adept at playing off a mix of religious tensions and xenophobia.

Switzerland’s Supreme Court ruled in 2003 that town councils voting to decide on granting individuals citizenship was unconstitutional. A failed referendum in 2008, initiated by the SVP, attempted to make the votes legal again.

Naturalization laws in Switzerland are some of the most stringent in the world. A law backed by the SVP prevents “convenience” marriages by outlawing foreigners from marrying Swiss citizens without a visa.

Switzerland’s net migration rate, the effect of migration on population change, is the third highest in Europe, trailing only Luxembourg and Spain. There are over 50,000 refugees in Switzerland, according to the UN Refugee Agency. With 332 asylum seekers per capita, Switzerland’s rate is double the European average.

The recent exclusion of military desertion as a reason for granting asylum was particularly harmful to applicants from Eritrea, which make up the largest portion of Switzerland's asylum-seekers.

In April, Switzerland reached an agreement with the European Union to restrict the total number of asylum seekers from all EU countries not capped under earlier arrangements.