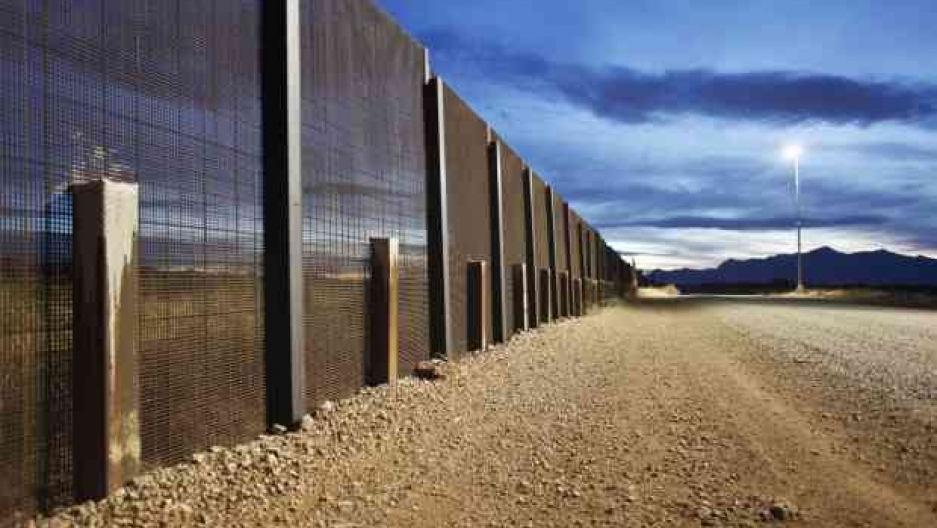 The Department of Homeland Security has authority to waive any law that gets in the way of its effort to build the U.S.-Mexico border fence, pictured here near Naco, Ariz.

It's a clear, breezy morning on the scrubby hills overlooking the Tijuana River Valley south of San Diego. Border Patrol jeeps cruise the dirt roads that run up and down the hills along the fence that marks the US-Mexico border. One drags a makeshift rake behind it to comb the road, so agents can later spot fresh footprints.

I'm here with Mike McCoy. He's a 71-year-old veterinarian who's spent more than half his life working to protect the estuary formed where the river meets the Pacific Ocean.

We're heading down toward a place called Smuggler's Gulch.

"This was probably the most difficult cut for them, and the most problematic cut for us," McCoy says.

By "us" he means the activists and local land managers who fought against a massive earth-moving project that filled in the deep gulch and built a road across it in 2009.

"Before (the road) was going down these switchbacks," he says. "And that took a long time," he says.

Starting in the 1990s, this place became ground zero in the battle to secure the border.

Back then, hundreds of illegal immigrants swarmed down the hills nightly from Tijuana. The Army Corps of Engineers built a 10-foot high fence, but it wasn't much of a deterrent. So in 1996, Congress authorized a triple-layer fence to be built along 14 miles of the border.

"The fence, to me, was a real threat to what might occur in the estuary," he says.

Conservationists worried especially that filling in Smuggler's Gulch would disrupt the flow of water and change the estuary's ecology.

And they succeeded in slowing down construction for years.

Then came 9/11, and Congress ordered a massive expansion of the fence project--from 14 miles to 700 miles along the US-Mexico border.

Environmentalists challenged much of that as well, and again slowed construction in many spots.

Paul Ganster, of the Institute for Regional Studies of the Californias at San Diego State University, says that put the Department of Homeland Security (DHS) in a tough spot.

"Because it was ordered by Congress to build so many miles of fence by a certain amount of time and they weren't able to proceed to do this," he says.

So Congress responded by giving DHS the right to waive all laws that could slow construction of the fence.

"And that removed a major tool of environmentalists and others opposed to the construction," he says. "And it really removed a lot of the requirements for an open process, for public hearings, things that citizens and communities and environmentalists fought for, really from the 70s."

Since then, DHS has waived dozens of federal and state laws to build new sections of the fence, some of it across protected land and habitat for endangered and threatened animals.

McCoy says deer and jaguar and Sonoran pronghorn are just some of the species being affected as the fences chop up their breeding grounds.

In some places, fencing has also contributed to flooding, erosion and destruction of habitat.

To date, around 650 miles of the nearly 2000-mile US-Mexico border are fenced off.

Florida Republican Marco Rubio spoke on the Senate floor earlier this year in support of the border security component of the senate's immigration bill. The bill called for hundreds of miles of more fencing, and it would give Homeland Security even more power to waive laws to build it.

"We have a sovereign right to protect out border. And we have a crisis on the southern border of the United States," Rubio said at the time.

A handful of Democrats fought the waiver, led by Senator Ron Wyden of Oregon.

Wyden told his colleagues, "Strengthening our immigration system should not come at the cost of throwing our environmental laws aside."

And Wyden argued that the bill should at least include a sunset clause for the waiver.

But the environmental concerns didn't get much traction. The bill passed the Senate by a wide margin.

Back in San Diego, Shawn Moran of the Border Patrol agents union says more fencing is a good thing. He says the San Diego fence has slowed illegal traffic here to a trickle. And that adding hundreds of miles of new fencing probably would help by funneling illegal traffic into areas agents can control.

"It's not the answer to border security, but it is a primary tool that the border patrol has to slow down things," he says.

Walking along the border, activist Mike McCoy admits that the environmental impact of all this fencing through the Tijuana River estuary hasn't been "all bad." Illegal crossers used to tromp through sensitive areas in the estuary. And he does understand the need for a secure border.

"I just think that we could've done better, biologically and ecologically, than what we did with this approach," he says.

What really rankles McCoy is the supreme trump card held by one federal agency.

"It's kind of my way or the highway type thing. And that's not the way America worked to me. We all had a say in what went forward."

The fate of the new environmental waiver, and the broader immigration bill that it's part of, is uncertain. The House of Representatives has said it will write its own bill rather than take up the Senate's bill. But whatever happens in the Capitol, it's likely that as the debate over immigration and border security gets louder, environmental concerns will remain barely a whisper.