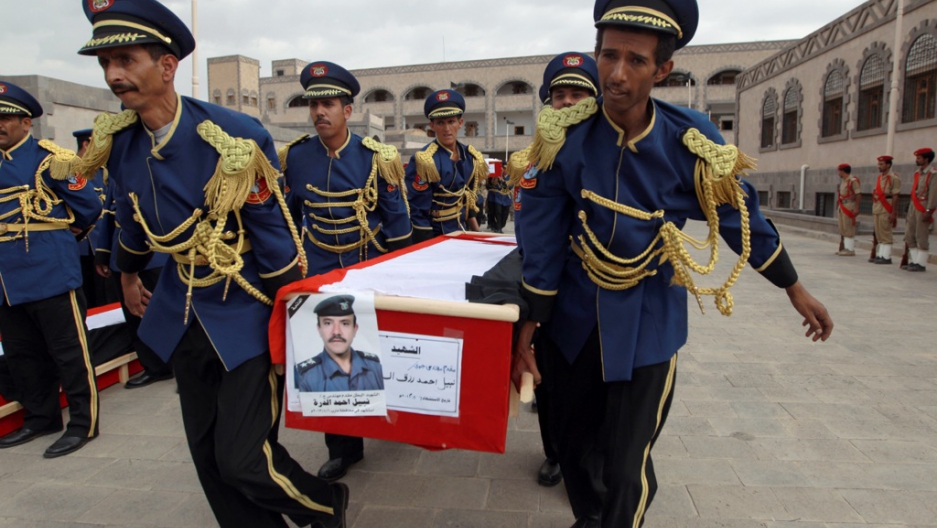 Honor guard soldiers carry the coffins of military officers during their funeral ceremony on Aug. 7, 2013 in the Yemeni capital Sanaa. Yemeni tribesmen shot down an army helicopter, killing eight soldiers, on August 6 in the lawless eastern province of Marib during a clash over repairs to a main oil pipeline blown up by saboteurs, a tribal chief said.
Credit: MOHAMMED HUWAIS
Share

Reports of an Al Qaeda-issued threat that closed 19 US diplomatic posts around the world were followed by a series of rapid fire drone strikes against what the US says are Al Qaeda militants in Yemen, including three successive strikes on Thursday.

Is Al Qaeda in the Arabian Peninsula — or AQAP — really the terrorist network's most dangerous affiliate?

To understand AQAP, the terrorist threat in Yemen and America's role there, GlobalPost spoke with Gregory D. Johnsen, Ph.D. candidate in Near Eastern studies at Princeton University, and author or "The Last Refuge: Yemen, Al Qaeda, and America's War in Arabia."

The interview was edited and condensed for clarity by GlobalPost.

Yemen claims to have thwarted an Al Qaeda plot to destroy oil pipelines, potentially kill foreigners and seize major ports. You said you were "skeptical" about the report. What do you find suspect?

Nearly everything. It's different from what AQAP has done before. They have attacked oil and gas facilities, but a takeover in this style — that’s not to say they might not in the future — but it would be a major departure for them.

With the timing of the report it sounds more like political theater than a specific threat. And US officials said this particular plot has nothing to do with the previous terror alert.

The origin story of AQAP often begins with a 2006 jailbreak of 23 Al Qaeda prisoners in Yemen. It’s difficult to know their exact strength now, but evidence suggests it has quickly become a deadly and effective network. Why has AQAP thrived, despite all the obvious military advantages of the US?

The US has more money, more men, better technology, more and better weapons, and it’s self-evidently right in this war against Al Qaeda — again in a place like Yemen — but the US is losing on the ground.

When those 23 Al Qaeda suspects tunneled out of prison, they walked back into a world in which the US was preoccupied with Iraq and the Yemeni government was preoccupied with an insurgent rebel group on the Saudi border. So this group had space and time, a two-and-half-year head start. Both governments have been playing catch-up ever since.

In its war against AQAP, Washington has increased drone strikes in Yemen, with six recorded attacks in the last two weeks. There is an ongoing debate about the long-term efficacy of drones. One side says we need to kill terrorist leaders with targeted strikes. The other side says the strikes kill innocents and serve as a recruiting tool. What’s your take?

I come down in the middle. I’m not a critic of drones. I’m a critic of how the Obama administration uses drones in Yemen. There’s a very powerful and important place in this war for drones against Al Qaeda. But they only give the United States an advantage if used properly, wisely and judicially.

Right now the United States' over-uses drones that either kill or — just as importantly — are perceived to kill civilians. And one of the real truths of this war, a truth in the war against Al Qaeda, is that the side that kills fewer civilians wins.

In 2012, there was this cleric — a man by the name Salim al-Jabir — in Hadramout, which is out in eastern Yemen. He was a preacher in a local mosque, and he stood up against Al Qaeda. He said Al Qaeda has no place within the family of Islam. [He said]: "These men are not true Muslims. They’re murderers."

This cleric was so successful that AQAP met with him because their recruits were drying up. Then a United States drone killed the Al Qaeda members, Salim al-Jabir and someone he brought with him.

That story gets to the Achilles' heel of the United States in places like Yemen: poor on-the-ground intelligence.

Last week, Washington closed some 21 diplomatic posts, and 19 of those remain shut. The government in Sanaa criticized the defensive move, saying the withdrawal of embassy personnel "serves the interests of the extremists." What does Washington’s caution and Yemen's criticism reveal about how the two nations precive the fight against AQAP?

It gets at the two primary US goals. The first is to prevent an Al Qaeda attack on United States interests in the Middle East. The second is to make sure no American official dies in Yemen. The United States holds a defensive posture. It has a fortified embassy, and there are costs to pay for such a bunker mentality.

The US won’t have individuals who know the country, who get outside the embassy or the capital. So you have them peeking over the walls, and the country becomes a blank map on which they cast their assumptions, and they advise policymakers in Washington, D.C.

Although the United States has previously sent special forces to train counter-terrorist units in Yemen, anonymous sources recently told the BBC there are new suggestions that the Joint Special Operations Command may prepare units for strike operations. Are we seeing a slight escalation on the US side?

It would be catastrophic for the United States to put boots on the ground. AQAP makes the argument that just like Iraq and Afghanistan, Yemen too is under western military attack. Thankfully for the United States that’s not an argument that has a lot of traction. But if they put soldiers on the ground that would change. AQAP would grow faster than we’ve seen to date.

Yemen is a desperately poor country that suffers from severe famine. Does that more than anything provide AQAP with the space to operate? Is that something that's missing from the conversation?

Yemen is a country of 26 million people and we estimate there are a few thousand in Al Qaeda. A tiny percentage that has taken all the attention of the global superpower, the United States.

But for Yemenis there are more important issues than the threat of Al Qaeda. Poverty in the country is unimaginable. It’s bone-crushing and grinding. People who sacrificed for the Arab Spring uprising in 2011 to force [former president] Ali Abdullah Saleh out of power — they believed they fought for a new and better Yemen.

In two years, their expectations have burst. Prices have risen, water continues to dwindle to the point where pipes in many places are turned on only once every month, if indeed there are water pipes. A large portion of the country is off the electrical grid.

This country has a lot of issues, and until we see Al Qaeda in that context I’m afraid we will continue to do what the CIA calls mowing the lawns of terrorism, instead of attacking the root system.