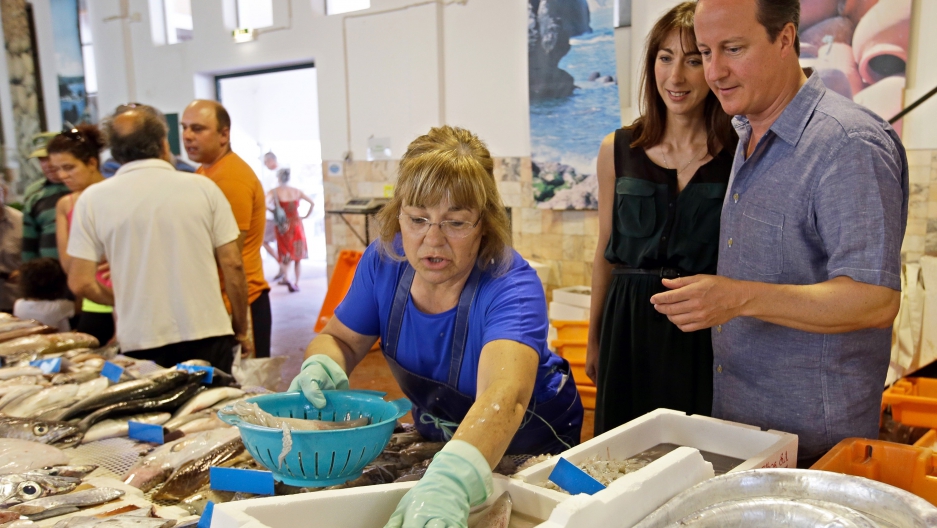 BRUSSELS, Belgium — Austerity or not, August is vacation time in Europe.

As the continent's political leadership joins millions of citizens heading to the beaches, however, the tough economic times mean most are taking care to ensure their holidays look humble.

Tropical beaches and hanging with billionaire buddies are out, stay-cations and low-cost flights are in as politicians take the ritz out of the recess.

Britain's Prime Minister David Cameron traveled to Portugal with his family on a much-publicized flight with the no-frills airline easyJet, which offers flights from London to the Portuguese south coast from around $30.

French President Francois Hollande is taking just one week of working vacation at the presidential weekend retreat in Versailles outside Paris.

Battling record-low popularity ratings, he'd rather not risk a repeat of the criticism triggered by last summer's stay at another official residence, a castle on a private island off the Riviera.

He’s spending most of the summer touring the country instead in an attempt to convince voters of his determination to fix France's economy.

"Unemployment doesn't take a vacation," he told a crowd on Tuesday in the western city of La Roche-sur-Yon.

Hollande’s plan may have backfired: His "minimalist vacation" has drawn criticism, including from the news magazine L'Express this week in a story titled "Hollande: is just one week of vacation really reasonable?"

"People with high pressure positions face chronic fatigue linked to the pace of their work, they need to switch off, or they risk burnout," Claude Delgenes, a workplace risk assessment expert, told the magazine.

In contrast, Europe's most powerful leader was able to get away from it all, and with public support.

A poll showed 85 percent of Germans believe Chancellor Angela Merkel had earned her three-week vacation mostly spent hiking in the Italian Alps with her husband.

She left early, setting out in July so she can return to campaign for national elections next month to help ensure she remains way ahead in the polls.

Workers enjoy a minimum of 24 days of paid vacation a year by law, not including public holidays. That's broadly in line with most other European Union countries, although Germans generally get around 30 days off thanks to labor agreements.

Germans actually work some of the shortest hours in Europe: on average 1,397 hours a year, according to the Organization for Economic Cooperation and Development. That's the second lowest in the EU, after the Dutch.

In comparison, Americans toil for 1,796 hours.

Europe's champion workers are actually the Greeks. They put in 2,034 hours a year — confounding the stereotype of work-shy southern Europeans that’s been perpetuated by some in the German press during the current economic crisis.

Germans tend to counter such figures by pointing out that while they may spend less time on the job, they work harder while they’re there — hence their high productivity and economic success.

Although Merkel has little fear of losing votes by rambling over the peaks of the South Tyrol, she and other European politicians are well aware that they risk more than sunburn by making the wrong vacation choices.

A couple of years later, then-Czech PM Mirek Topolanek's dignity was stripped bare when he was snapped going naked with some of Berlusconi's young female friends in the gardens of that same villa.

Hollande's predecessor Nicolas Sarkozy was never able to shake off his "president bling-bling" tag after celebrating his 2007 election victory with a Mediterranean cruise on the yacht of a billionaire acquaintance.

So leaders of the southern European countries worst hit by the recession are all staying at home for their summer break.

Spain's Prime Minister Mariano Rajoy is reportedly dividing his time between the natural beauties of Donana National Park on the southwest coast and a $360-a-night vacation retreat in his native Galicia region.

His Portuguese counterpart Pedro Passos Coelho is sharing space with a couple dozen security guards at the little resort of Manta Rota in the Algarve region, an hour from Cameron's hillside retreat.

Italian PM Enrico Letta is hoping for a few days in his hometown of Pisa and Greece's Antonis Samaras says the government will work through August — although he may grab a long weekend back home in the Peloponnese region.

More from GlobalPost: If you can't stand the heat... Where to cool off when Europe's cities are sizzling.

But modest vacation plans are still open for criticism.

Opposition lawmakers in Britain have pointed out that Cameron's sojourn in Portugal — which included a squid-buying photo-op in a local fish market — came after some early-summer R&R on the Spanish island of Ibiza, and will be followed by more time off back in Britain in Scotland and on the beaches of Cornwall.

“Many hard-working Brits will wonder why chillaxing Dave is taking three holidays this summer when they would be lucky to go on one at all," Labor legislator Steve McCabe told The Daily Mirror. "It’s another sign of how out of touch this Tory Government is.”