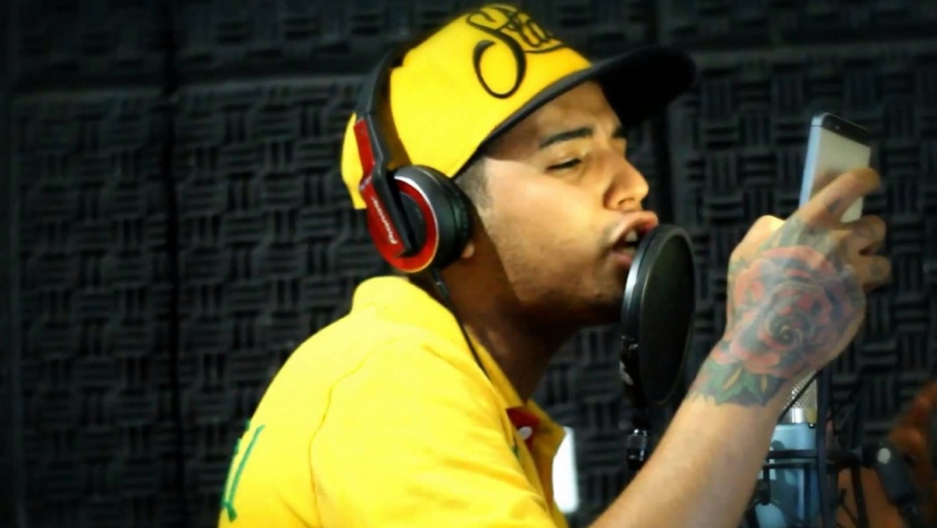 Brazil's MC Daleste on the microphone in a still from a music video.
Share

RIO DE JANEIRO, Brazil — “To kill the police is our goal. Tell us who’s got the power? I’ve got it, with my criminal mind and the heart of a bandit. I’m the result of wars and rebellions, a graduate from a special criminal college.”

These are song lyrics by Daniel Pellegrine, a Brazilian hip-hop performer better known as MC Daleste.

The message may be reminiscent of “Cop Killer,” US rapper Ice-T's controversial song that, two decades ago, outraged the police and prompted death threats.

But rather than enjoying a life of fame like this onetime “gangsta rap” artist, MC Daleste’s fate turned out more like that of Tupac or Biggie — a life cut short by a mysterious murder.

Family and fans are still reeling after an unidentified gunman shot 20-year-old Pellegrine dead last month. Many here suspect his rhymes provoked the killing. Some even allege his killer was linked to the target of that threatening rap line: the police.

Brazil, like so many other young democracies in Latin America, suffered under a military dictatorship not long ago. Now a new generation is growing wary of authority, as seen in recent protests that brought millions to the streets across the country.

Many Brazilians accuse cops of being corrupt, inept or unnecessarily brutal in their crackdowns — a charge that's been difficult to prove, let alone prosecute. But if investigators discover military police are behind the rapper killings, it would be a new low for Brazil’s embattled security forces.

Singing about violence and other sins is common in “proibidao,” a Brazilian style of rap so incendiary that the authorities outlawed it.

But hardened by social injustice, violence and poverty that run deep in the favelas (slums) of Sao Paulo and Rio de Janeiro, rappers still perform their songs in defiance.

Critics say they’re spreading hate against the police while glorifying crime, drugs and sexist attitudes and acts. The police accuse the performers of being hate-filled mouthpieces for favela drug barons.

Marcelo Rezende, a journalist with more than 30 years experience investigating police abuse, corruption and arms trafficking, said he believes hit squads are operating in Rio de Janeiro and Sao Paulo with a mission to silence the rappers.

He said the killers’ motives include extortion, debt collecting for drug dealers and revenge attacks on rappers who call for the murder of policemen.

“They’re a group of assassins, mainly from the military police, who have drifted into crime because it offers more lucrative rewards than their salaries,” Rezende said. “They’re supported by insiders who continue to serve in the force.”

Last month, the Sao Paulo state authorities arrested seven anti-drug police agents suspected of involvement with drug traffickers in the cities of Campinas and Sao Paulo. The investigation revealed the officers had earned 200,000 to 300,000 Brazilian reais ($86,889 and $130,333) a year from working for drug dealers.

Six out of 10 police officers in an April survey by Brazil’s Justice Ministry acknowledged they turn a blind eye to dishonesty and corruption in the force.

On the night he died, MC Daleste had just gone on stage to perform a free concert for more than 4,000 fans. He was minutes into a song ranting about “vermin” and “bad boys” — a possible reference to police — when he was hit by two gunshots (around 1:05 on this fan's YouTube video).

No one claims to have seen the shooter. But dozens of fans recording the concert with cellphone cameras caught the moment the rapper abruptly slumped to the ground. The first bullet grazed his armpit. The second struck him in the abdomen.

Investigators say his killer was a precision marksman.

“We believe the gunman was between 30 to 40 meters away from the stage, and that takes skill and professionalism,” detective Rui Pegolo, the civil police’s lead investigator into the murder, told GlobalPost.

“We're not dealing with someone who was shooting for the first time. The gunman was calm and accurate.”

The show took place late at night in a vacant rundown lot on the edge of a favela in Campinas. The organizers didn’t seek permission from authorities to hold the event. The only approval that mattered was that of the drug lord who controlled the nearby favela, according to fans who live in the area but asked for their names to be withheld.

All the murdered performers grew up in shanties, but the life of a rap singer in Brazil’s biggest cities can be very lucrative. MC Daleste didn’t have a toilet in his house until the age of 13. At the time of his death he was earning more than $90,000 a month from 40 or more regular shows, his father Roland Pellegrine said. In fact, he was booked to perform four other shows that night.

Despite those huge earnings displayed in expensive watches, the latest sneakers and clothes, gold chains and flashy cars, Daleste chose to remain in his favela home.

He even took his name from the area, Zona Leste. That means “east zone,” and Daleste is a variation of “from the east.”

Daleste’s father said his son had stopped singing the proibidao songs and instead sang about wealth, girls and bling. Someone killed Daleste out of envy, he believes.

“He was a very good boy, he was charismatic and peaceful. He didn’t have any enemies. All he wanted to do was to sing his music,” Pellegrine told GlobalPost.

Felipe da Silva, aka MC Boladao, and DJ Felipe Silva Gomes, both 20, were killed in a drive-by shooting in April 2010.

Speaking to GlobalPost from a secret location in Sao Paulo, da Silva Cruz said: “I believe that this young MC was killed by the same type of vigilante group that murdered my son and his friend.

“These people are professional and powerful and I don’t expect MC Daleste’s murder to be solved just like the others, because I believe there is a cover-up.”

Seven deaths in three years in dangerous favelas may not sound like a huge toll in a country with a murder rate of more than 27 per 100,000 inhabitants, according to one study. But the killings have the hip-hop scene here shaking.

In April 2012, three military policemen were accused of killing a rapper known as MC Primo in revenge for the murder of a colleague. The officers were arrested but no charges have been brought.

Just days later, Cristiano Carlos Martins, 26, aka MC Careca, reportedly received threats saying he would be next. He became the sixth victim.

Now, as the investigation into Daleste's death continues, other singers fear for their lives.

One of them, MC G3 Bio, has requested a hearing with the state’s public security secretary to plead for the right to purchase the vests, which can only be bought with permission from security officials.

“We are facing an invisible enemy,” MC G3 Bio told Sao Paulo Folha newspaper in July. “We do not know who is trying to kill us and we are afraid.”