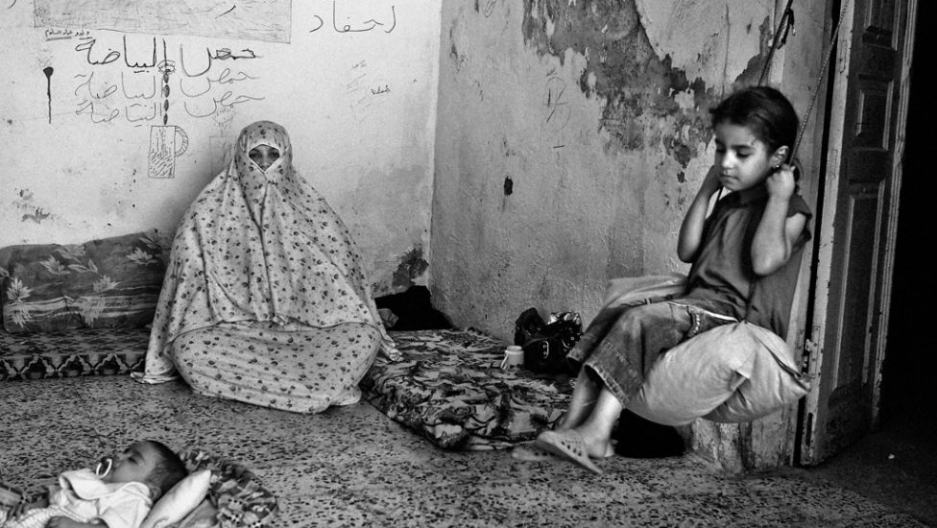 9-year-old Rania * (right), sits on a swing inside her extended family's home in East Amman, an area where many Syrian refugees have rented apartments. Her father and all the men in the family are still in Syria.
Credit: Moises Saman/Magnum for Save the Children
Share

AMMAN, Jordan — When I met them in early June, Abu Nizar, his wife and their three daughters — aged 22, 18 and 14 — were perched on threadbare mattresses in a rundown house in Ramtha, Jordan, where they survive on charity from the local community. Blankets covered the windows to keep out the mid-afternoon heat. Inside, a musty darkness hovered.

Abu Nazir pays almost 300 Jordanian dinars per month — nearly $424 — for rent and utilities. Alone, he and his wife could rent a room for 70 dinars. He said to me, only half-joking, “Of course my daughters need to get married — it will lift the burden off of me!”
A doctor from Dubai asked to marry Abu Nizar’s 22-year-old daughter, Rima, and he seriously considered the proposal. “He’s related to people who live upstairs. He’s a doctor, he has studied,” Abu Nizar told me.

Ultimately, Abu Nizar refused the offer. With her identity documents left behind during their flight from Syria, Rima would not be granted the passport and authorization to accompany her new husband to Dubai, leaving her vulnerable to becoming a so-called “pleasure” wife, abandoned after a short stint of marriage.

“A lot of women ask us here in Jordan if we want to marry our daughters,” Abu Nizar said. “We say no because we can’t guarantee her rights here.”

The focus on Syrian refugee women and girls has largely centered on accounts of forced and early marriage as a coping mechanism. Yet during investigative missions to Lebanon and Jordan by Human Rights Watch in March and June, I found that many Syrian families remain determined to protect their daughters from violence and exploitation.

While there are some reported cases of early or forced marriage, we have not found evidence that marriage patterns differ substantially from those in pre-conflict Syria. However, inadequate international assistance and the threat of ongoing poverty could eventually lead refugees to desperate measures, including exploitative marriages.

In early July, the UN Refugee Agency (UNHCR) reported that over 1.7 million registered Syrian refugees are living in neighboring countries; more than three quarters are women and children. UNHCR estimates that urban and rural host communities — rather than camps — house 77 percent of Syrian refugees in Jordan, Lebanon, Iraq and Turkey.

Refugees reported apprehension about seeking assistance from local police and security forces, some of whom, they believe, may be corrupt, abusive or unwilling to help. Scant support for generating income or rent and insufficient humanitarian assistance are creating heightened desperation as refugees seek to sustain their families and escape long-term dependence.

Women and girls are particularly vulnerable. Aid agencies say reports of domestic violence have increased since the refugee crisis began, a common outcome amid the stress, disruption and idleness of refugee settings and poor access to resources and services for women and girls. Social constraints and fear limit their mobility, restricting their access to income-generating activities or health and other critical services.

Whether based in fact or rumor, refugees’ belief that women and girls face danger outside the home creates a very real barrier to using facilities, from clinics and schools to latrines. Yasmin, in her thirties and living in Jordan’s Zaatari camp, said: “We make a bathroom in our tent to use at night.” A new UN Women assessment says that male relatives restrict women’s movement in Jordan’s urban refugee areas to protect them from harm.

In interviews in Lebanon and Jordan, aid agencies and refugees confirmed that refugees remain largely unaware of available services, especially outside of camps. Services are often out of easy reach, and women must secure transportation or child care to use them.

Aliyah, 20, described trying to register for humanitarian aid when I met her in Beirut in March: “I would have to go [to UNHCR] all day, take the children with me, wait three months for an interview. That’s what happened to my sister-in-law.” Aliyah said the cost of a shared taxi prohibited her from going to the local branch of an international non-governmental organization to seek assistance.

The inability to sustain a household and access key resources makes women — in particular, those who head households — vulnerable to high-risk situations, including exploitative work or housing arrangements, dependence on others for food and other necessities, and early or forced marriage.

The international community needs to bolster protection for displaced women and girls by increasing their economic well being and developing and improving access to services.

Women need rent subsidies in non-camp settings, opportunities to increase their skills, cash for work assistance programs, and income-generating activities. Ensuring greater access to services requires not only outreach to increase awareness, but also creative solutions such as programs that meet multiple needs in one location, mobile services, transportation and child care, and group assistance for safety and security.

To respond to the many needs of women and girls, United Nations member states and other donors should fund the $2 billion-plus gap that remains in response to the United Nations appeal for Syrian refugee response.

Donor countries that value rights for Syria’s women and girls should ensure that this includes significant investment in concrete measures to reduce their vulnerability.

Hillary Margolis is the Women’s Rights researcher in Syria for Human Rights Watch.