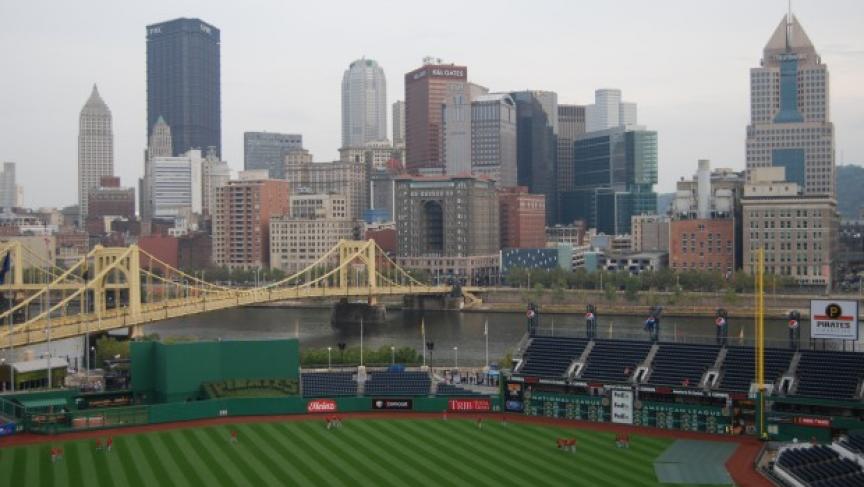 The pregame view of downtown Pittsburgh and the Allegheny River from PNC Park, home of the Pittsburgh Pirates.

Share
Long before Detroit’s meltdown, there was Pittsburgh’s.
“It’s a pretty safe bet that Pittsburgh suffered the worst economic setback of any region in the United States in the second half of the 20th century,” said Bill Flanagan, who is helping spearhead development here with the Allegheny Conference on Community Development. “By 1983, the metro unemployment rate here was over 18 percent.”
Since then, Pittsburgh has been a story of reinvention.  As many Rust Belt cities have died, Pittsburgh has come back from the abyss, largely driven by the tech and healthcare industries.
Today, Pittsburgh’s unemployment rate is lower than the national average and it’s ranked as one of America’s most livable cities.
The city looks clean and downtown’s buzzing.  I met Flanagan at a crowded restaurant in Market Square, a square-city block renovated with shops, restaurants, and a weekly farmer’s market. But Flanagan says that while Pittsburgh has bounced back, the fallout from the bust still resonates.
“So during the '80s and '90s, when many other regions were enjoying a boom of immigration, especially international immigration, Pittsburgh saw none of it. So it becomes a competitive issue. Companies here can’t grow, as they become more national and global in scope, they have a hard time attracting talent to a community that doesn’t mirror markets they serve.”
Add in Pittsburgh’s aging workforce, which Flanagan described as an acute problem, and local groups are now putting out the callto foreign-born workers: Come to Pittsburgh.
Other Rust Belt cities like Detroit, Dayton, and Cleveland are also working to expand their immigrant populations as a way to help revitalize their local economies.
Ads like these--in both English and Spanish marketing Pittsburgh to immigrants living in other parts of the US--are backed by the city’s highest officials.
“The basic reason is I’d like to see my city survive,” said Pittsburgh City Councilman William Peduto, who recently won the Democratic mayoral primary, which means he’ll almost certainly soon become the next mayor of this heavily-Democratic town.
Peduto said, sure, the door is wide open to US-born workers relocating here. But he’s not betting the city’s future on it.
“Because I grew up in the '80s, I know first-hand what has happened to cities like Pittsburgh. When I graduated high school in 1983, I saw all my friends leave."
"We lived in double-digit unemployment for over a decade. There wasn’t anybody coming here. The opportunity to bring new people here is what built Pittsburgh. And it’s a continuation of that, that will help to bring us back," said Peduto, who mentioned that he's the grandson of Italian immigrants.
Peduto wants both high- and low-skilled immigrants to come here: engineers and janitors, refugees and Ph.D’s. He said, good-paying jobs are the best way to do that.
He and other civic leaders also tout Pittsburgh’s quality of life and low living costs.
That’s what lured Moroccan Zineb Outnouna, who I met at a happy hour mixer for ex-pats put on by the non-profit group “Global Pittsburgh.”
Outnouna runs the company Atlas Dreams Languages and lives in a one-bedroom apartment 20 minutes from downtown.
“I pay only $420 a month, and it’s a great big apartment. The bedroom is huge. The living room is the size of this area right here where we are,” said Outnouna.
We were in a pretty big bar.
Outnouna couldn’t stop gushing about all things Pittsburgh. “I love it, I love it. I love Pittsburgh.”
I spoke with others here sharing that Pittsburgh passion.
Now, the city’s challenge is to entice more immigrants to take the plunge.
Community leaders are offering another perk:  Send your kid to public school in Pittsburgh, and the non-profit organization, The Pittsburgh Promise, will contribute $40,000 for them to go to college, up to $120,000 per family.
Right now, just 7 percent of Pittsburgh’s population is foreign-born.
It’s a sociological truth: immigrants follow other immigrants. I asked Outnouna how she ended up in Pennsylvania.  She says she’d heard of the colleges and the Steelers.
“The Steelers, which was very mind-blowing to me because they say football, and for us football is soccer.”
Oh well. The bigger lesson: A winning football team can help your city in unexpected ways.
Another man I met from Mexico told me he ended up in Pittsburgh because he got on the wrong bus. He’s remained for 15 years.
Ultimately, this first wave of new ex-pats might be the best recruiting tool for the region.
People like Nigerian-born Emeka Onwugbenu, a 27-year-old real estate developer who founded the company E Properties and Development, a firm that employs 18 people in Pittsburgh. Onwugbenu went to Penn State for undergrad and stayed in the area. He later asked his sister in Washington to join him.
“She’s like, ‘No I’m not doing that, I’m not leaving DC for Pittsburgh.’”
After two years, Onwugbenu said she relented.
“She’s still growing to it. It’s not DC, but I believe she’s starting to like it.”
Music to the ears of Pittsburgh’s planners.