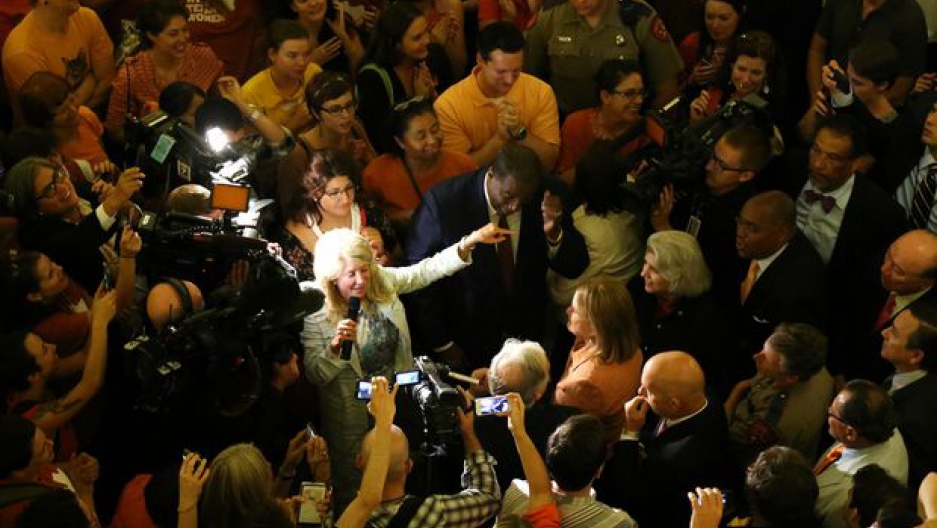 Texas Republicans made a splash last month by passing House Bill 2, a measure considered to impose some of the toughest restrictions on abortion rights in the country.

The bill is likely to please the party's conservative, anti-abortion base, a group who's religious values often influence their views on abortion and who fall on the early side of the "When does life begin?" debate.

At the same time, the bill has rankled abortion-rights supporters not only in Texas, but around the country thanks to Democratic state senator Wendy Davis' high-profile filibuster of Senate Bill 5, an earlier abortion bill.

Davis' stand against Rick Perry and the Texas Republicans was broadcast live, and as social media interest built, many tuned in to see if she would succeed. Though she was able to bring far more attention to the abortion debate in Texas, Perry eventually passed his party's abortion legislature.

The bill bans abortions after 20 weeks of pregnancy, down from the previous limit of 24 weeks, and requires that abortions only be performed at facilities that meet "surgical center" standards.

The implications of the bill — and the political implications — will become apparent in the coming months, perhaps especially among Latinos, in both cases.

All the attention around abortion, and the impact the new law will have on Latinos, could generate more interest in Latino voters – just 35 percent of whom actually turned out to vote in the 2012 presidential election.

Supporters of the bill, including the Republican leaders responsible for the its passing, say it will provide greater protection to unborn Texans.

"It is our responsibility and duty to give voice to the unborn, the individuals whose survival is at stake," Gov. Perry said. "This bill lives up to that responsibility."

Critics, like Lillian Ortiz, a board member of NARAL Pro-Choice Texas, say that Texas should be more concerned with the children already living in Texas.

Ortiz rejects what she calls the "myth" that a majority of the Latino community subscribe to Republican ideologies.

The numbers show that the Latino community is most likely divided on the issue.

Nineteen percent of Latinos were opposed to abortion in all situations, according to a 2011 Univision/Latinodecisions.com poll. But, another 47 percent were found to either embrace or reject "pro-choice" and "pro-life" labels, according to a 2012 poll by the Public Religion Research Institute.

"It's curious to me that these arguments are deriving from the Latino community," said Jason Villalba, Texas state representative. "If you go into the Latino community in any real capacity you'll find quite quickly that this a community that believes strongly in the culture of life."

But Villalba recognized the strain Republican immigration policy has put on ties with the Latino community and called for efforts to repair them.

"I don't think we've done a good job with that," Villalba said. "Some of the rhetoric from our side has been white hot, it has been pejorative and pushed away some of my brothers and sisters in Latino communities."