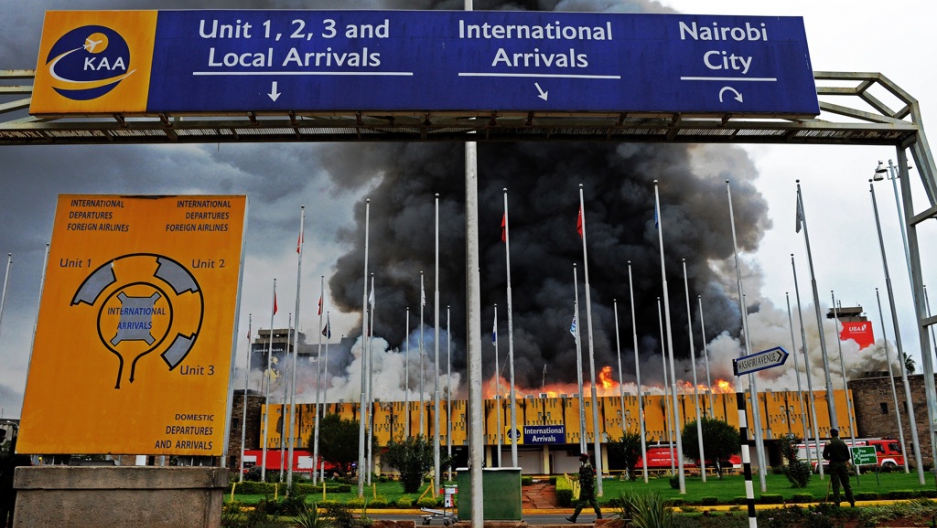 NAIROBI, Kenya — A massive fire shut down Nairobi's international airport Wednesday, as firefighters struggled to put out the blaze in east Africa's most important transport hub.

Except for emeergency landings, all flights to and from Jomo Kenyatta International Airport (JKIA) were canceled or diverted for most of Wednesday. Domestic and cargo flights resumed later the same day.

International flights were officially still on hold Thursday, though two long-haul flights landed safely that morning, according to a statement by the Kenya Airports Authority.

Cabinet Secretary for Transport and Infrastructure Michael Kamau said one of the airport's domestic units would temporarily be used as an international terminal.

"There is a serious fire at JKIA, but we are doing everything possible to avert a crisis," Mutea Iringo, a senior official at the interior and national coordination ministry, told Agence France-Presse earlier in the day.

He said the fire was "massive" and had left the arrivals and immigration areas "totally damaged."

The fire broke out shortly before dawn, for reasons that remain unclear. It is believed to have started in the immigration area of the arrivals hall, according to Reuters.

There are no reports that terrorism was involved.

Getting the fire under control at Nairobi's main airport #JKIAFire# pic.twitter.com/o94H8cidzV

No serious injuries were reported. Two people suffered smoke inhalation, according to the Kenya Red Cross, but were said to be "safe in hospital."

Flights were diverted to other airports, including Mombasa and Eldoret.

Authorities said they had closed roads around the airport except to emergency vehicles, and airlines urged their passengers to avoid the area.

Images on social media showed flames rising high in the sky and clouds of smoke billowing out of the main arrivals and departures terminal.

By 10 a.m. local time, it was reported that flames at both terminals were under control.

Smoking ruins of the arrival hall at Nairobi airport, #Kenya, where a fire broke out today JKIAFire pic.twitter.com/zo9eMrXRLh

The airport, parts of which were gutted by the flames, will remain closed until further notice.

"We will try our best to open the airport as it cannot be closed for long but we cannot compromise security," Cabinet Secretary for Interior and Coordination of National Government, Joseph Ole Lenku, told Kenya's Standard newspaper.

Nairobi airport serves as a regional hub for east Africa, with many long-distance international flights landing there to connect to countries across the region. With around 7 million annual passengers and dozens of airlines including Kenya Airways, KLM and South African Airways flying to Europe, the United States, the Middle East and Asia every day, the fire is likely cause serious disruption to both tourists and the economy since the airport is one of the busiest in Africa.

The blaze comes two days after aircraft were delayed at JKIA for several hours after the failure of a fuel hydrant needed for refuelling the planes.