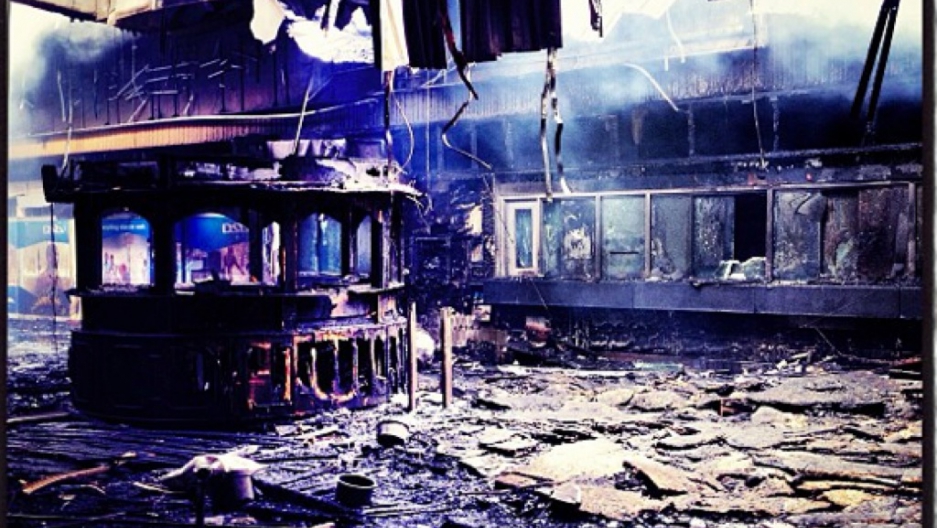 NAIROBI, Kenya — A devastating fire at Nairobi’s Jomo Kenyatta International Airport Wednesday has left thousands of travelers stranded across the globe and is threatening to unseat the East African city as the region’s premier transport hub.

Nearly all incoming and outgoing flights to the Kenyan capital were halted Wednesday morning after the massive blaze that raged for four hours gutted the international arrivals terminal and damaged other parts of the airport.

Authorities said domestic and cargo flights were set to resume later Wednesday. National carrier Kenya Airways announced its first international flights, some of which were diverted to Mombasa, would begin arriving again in Nairobi early Thursday.

But the potential long-term impact on Kenya’s economy may prove harder to recover from.

Smoking ruins of the arrivals hall in Nairobi's main airport, gutted by fire on Wednesday morning.

Kenya Airways shares fell 2 percent to $0.11 in the wake of the fire, Reuters reported. Flower and vegetable exports — which bring in roughly $1 billion each year — remained idle as exporters waited for news of fresh flights.

Jane Ngige, chief executive of the Kenya Flower Council, said the effect on the industry could be “disastrous” if flights did not resume very quickly.

The slow emergency response is also likely to damage Kenya’s international reputation. Some witnesses said the first fire engines arrived two hours after the blaze started at 5 a.m. Because Nairobi’s municipal government auctioned off the city’s fire trucks to pay off its debt in 2009, privately-run fire trucks arrived to put out the inferno.

“We’re looking at disruption to 16,000 passengers and 200 flights a day, so the impact is not just on Kenya but the entire region,” said James Shikwati, director of the Nairobi-based Inter-Region Economic Network, a think tank.

Working to get the fire under control at Nairobi's main airport.

More than 16,000 passengers use Jomo Kenyatta International Airport every day. Dozens of airlines including British Airways, Emirates, KLM and Kenya Airways have scheduled daily flights to destinations in Africa, Europe, the Middle East and Asia.

“Our competitors in Ethiopia, Tanzania, have been angling to take charge and this is an opportunity for them,” Shikwati said.

August is part of Kenya’s peak tourism season, when foreign holidaymakers come to watch the annual wildebeest migrations in the Massai Mara and Serengeti parks. The last figures released by Kenya’s tourism ministry had more than 1 million tourists visiting the country in 2010.

As the fire broke aviation authorities diverted flights to airports in Mombasa, on Kenya’s coast, and Eldoret, west of Nairobi.

President Uhuru Kenyatta visited the charred terminal and said he was “dismayed by the disruption and damage caused” to the airport that bears his father’s name.

Staff and passengers were evacuated quickly, and only two people were treated for smoke inhalation.

Wednesday marked the 15th anniversary of an Al Qaeda attack on the US embassies in Kenya and Tanzania, and which killed 200 people. But Kenyan officials say it is too early to know whether the fire and the 1998 attack are connected.

“The cause of the fire is being investigated,” Kenyatta said. “There is no reason to speculate at this point.”

The arrivals hall — usually bustling with tourists, safari guides, taxi drivers and others — is now charred debris, the floor covered in broken glass and the roof caved in.

“There is a lot of work to be done to get Nairobi back on track,” Shikwati said.

A salvage operation in the ruins of Nairobi airport's arrivals hall.