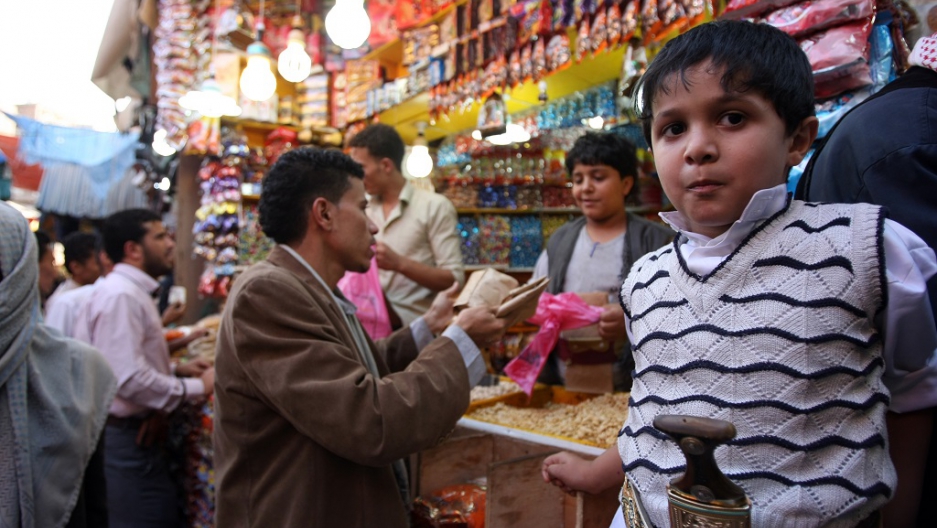 Yemenis shop at a bazaar ahead of the upcoming Muslim Eid al-Fitr in Sanaa, on August 13, 2012. Muslims throughout the world prepare to celebrate the Eid al-Fitr festival at the end of the holy fasting month of Ramadan, in which they refrain from eating, drinking, smoking and sexual activities from dawn to dusk.
Credit: Muhammed Huwais
Share

American and British diplomats are evacuating embassies in the Yemeni capital of Sanaa amid reports of potential attacks planned by Al Qaeda in the Arabian Peninsula (AQAP).

They leave behind an ancient city of more than two million Yemenis who've become accustomed to keeping an eye on the sky, scanning for aircraft.

But some are skeptical of the threat that has shocked US officials.

“I do not see any increased activity by AQ, in Sanaa or in other parts of Yemen. On the whole, things on the ground do not appear to be in sync with US response to close down its embassy and evacuate personnel,” wrote Haykal Bafana, a Sanaa-based attorney, in an email to GlobalPost.

Most Yemenis are currently busy preparing for Eid al-Fitr, which begins for most of the world's Muslims on Wednesday. One of Islam’s most important religious holidays, it marks the end of Ramadan with feasts, decorations, dance, and gifts for eager children. A great deal of preparation is required for the occasion, and in the days leading up to the holiday, Sanaa’s streets are filled with people on last-minute shopping trips.

This year, however, they may make an extra stop on their way out to scan overhead for unmanned aerial vehicles, otherwise known as drones.

“The [Yemeni] military presence has increased, but not by much, only near embassies and government offices. The streets are too crowded with people shopping for Eid. They’re busy but distracted by a need to look up to the air, seeing drones above their heads,” 22-year-old Sanaa resident Farea al-Muslimi told GlobalPost by email.

More from GlobalPost: Al-Qaeda in Yemen: A convenient threat?

Just last April, al-Muslimi, a Yemeni youth activist, appeared before the US Senate Judiciary Committee to give an account of drone strikes in his home country.

“It’s as if western embassies in Sanaa were not under threat yesterday, today they are and tomorrow they will be safe again. It isn’t very thoughtful and it’s inconsiderate to give AQAP this much attention and credit,” said Farea. “Eid is [tomorrow], should [we] focus on it in fear because foreign embassies decided to submit to AQAP threats?”

Just like al-Muslimi, American analysts can only speculate as to the severity of the threat behind the US response. The diplomatic consequences are clearer to see.

“After Benghazi, and how much that became a political football game, the US is having a difficult time walking the fine line between risk management and risk aversion. It’s a real problem for US diplomacy moving forward,” said Gregory Johnsen, Yemen analyst and author of the book “The Last Refuge: Yemen, Al Qaeda, and America's War in Arabia.”

“It’s a tradeoff. Do we want such a reduced presence in Yemen that we’re not able to leave our embassy?”

More from GlobalPost: US, UK evacuate embassies in Yemen due to 'extremely high' security threat

A stark counterpoint to American diplomatic efforts on the ground in Yemen is the ubiquitous presence of drones in the air. On Monday, four people suspected of Al Qaeda militancy were killed in a US drone strike in the governorate of Marib, just east of the capital. Not long after the strike, an aircraft appeared over Sanaa that many residents feared was a drone.

“Drone or normal plane, the fear was expressed by many,” said Haykal Bafana, the attorney. “Many thought it was a drone about to attack, and it made them scared.”

Terror is often evoked by the presence of drones, Farea al-Muslimi agreed.

“Just like when Americans looked up and saw that second plane targeting the Twin Towers in 2001, Yemenis feel the same terror. It’s something you can’t anticipate or know where it will target next. Yemenis have begun hating the sky,” said al-Muslimi.

With fear of drones becoming deep-seated among Yemenis after years of strikes, this week's evacuation of US personnel calls American strategy in the country into question.

“The US has had some counterterrorism successes in Yemen in the killing of Saeed as-Shihri and Anwar al-Awlaki. But in spite of these successes, it seems as though AQAP is growing in terms of numbers and obviously, given this alert, projects enough strength to frighten the US significantly,” said Johnsen.

“In the last 4 years, it is hard to say that the US has had a successful counterterrorism strategy in Yemen,” he added.

The threat of an imminent Al Qaeda attack on Sanaa has little chance of dampening the city's festive spirit as Eid al-Fitr approaches — and, in spite of the fear, neither will the presence of US drones overhead. But between bites of beloved dishes like Fahsa or Bint as-Sahn, some may listen for the distinct, distant buzz in the sky they’ve come to know quite well.