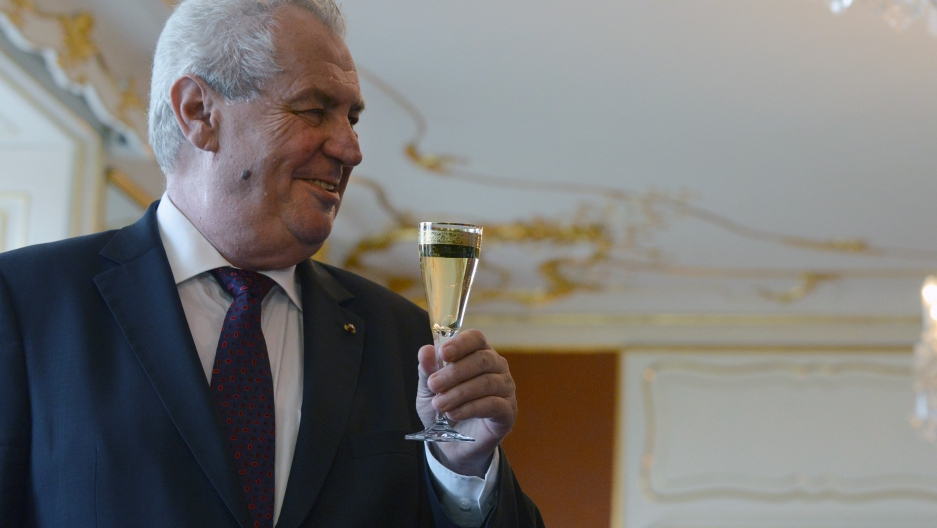 PRAGUE, Czech Republic — When the government collapsed last June at the peak of a scandal over accusations the prime minister's top aide abused her office, it was shocking even by the standards of the country’s notoriously corrupt politics.

Among other allegations, the aide — with whom now-former Prime Minister Petr Necas happened to be having an affair — ordered the security services to spy on his wife.

But what followed really rocked the political establishment.

When Necas's Civic Democratic Party, the ODS, tried to reconstitute its center-right coalition under a new prime minister — which it insisted was its right — it was stopped by someone who’s supposed to play only a ceremonial role in politics: the president.

Ignoring the ODS, Milos Zeman tapped own his economic adviser to form a caretaker government.

Critics said the social democrat had no right to change the government’s political alignment.

Among them is Karel Schwarzenberg, who narrowly lost a bitterly fought presidential election to Zeman in February. The foreign minister in the recently collapsed government, Schwarzenberg says his primary objection to a new government led by Zeman’s protege Jiri Rusnok had nothing to do with policy orientation, only constitutionality.

The new government faces a vote of confidence in parliament on Wednesday. With the ODS leading the vote against it and Zeman’s former party, the Social Democrats, voting for, the result will probably come down to turnout and a handful of independent MPs. If the government survives, it won’t be the first time Zeman, a veteran political fighter, would have come from nowhere to dominate Czech politics.

In the summer of 1989, when Poles were celebrating a resounding rebuke of the Communists at the ballot box and hundreds of East Germans were walking across the Hungarian border into Austria, Czechs were largely oblivious to the momentous geopolitical developments unfolding around them.

Zeman, then an unknown prognosticator in an obscure government agency, was one of the first here to sense that communism was crumbling across Eastern Europe.

That summer, he caused an uproar by publishing an article harshly critical of the regime in a small technical magazine. By the time the Velvet Revolution began unfolding in the fall, Zeman had become closely associated with the reform movement.

When the communist regime collapsed, the playwright Vaclav Havel emerged as the revolution’s hero and became the first president of post-communist Czechoslovakia.

The prickly Zeman — a chain-smoking prodigious drinker — was left to find a new route to what many observers believe to be his overriding goal: the attainment of power.

He soon snared a leadership role in the Czech Social Democratic Party, the CSSD. Transforming it into a dominant force, he became a well-liked populist prime minister in 1998 until he was removed from the party’s leadership after four years.

Now a critic of the CSSD leadership, he left in 2007 and later formed his own party, bankrolled by powerful lobbyists connected to a Russian oil company. It failed to win enough votes to qualify for parliament, but that didn’t stop him from storming back to win the country’s first direct presidential elections.

Zeman has been pushing the bounds of his presidential power almost from the day he took office in March.

Declaring greater authority for himself by virtue of being the first Czech president selected by the people, he proceeded to challenge the government over two ambassadorial appointments, then caused an uproar in the academic community by refusing to carry out the ceremonial act of bestowing the title of professor on a university lecturer nominated by his peers.

But that tames in comparison to his current effort to install a loyal government under Rusnok, who served as finance minister in Zeman’s government.

Schwarzenberg — a 75-year-old, bow-tie-wearing Hapsburg prince whose family fled Czechoslovakia for Austria after World War II — said the rise of Hitler in Germany and the communists in post-war Czechoslovakia were cautionary tales about the need to respect the constitution.

“We have had in the 20th century in this part of the world quite a lot of experience with what happens if you don't resist from the beginning undemocratic developments,” he said sitting on a terrace and puffing on a pipe during a break from parliamentary proceedings. “This experience teaches us to be very, very careful, and to fight against each act of disrespect toward the constitution.”

The president's office defended Zeman’s appointment of Rusnok in an email response to questions, saying that installing a new government and holding early elections is the best way forward after the recent ODS scandal.

The president “made a clear decision to appoint a government of experts,” it reads. “He has already stated that it is the only way to bring the Czech Republic to preliminary elections.”

The ODS, “which at the end had only 10 percent of public support,” had lost the right to govern, it added.

It would seem on first glance that Rusnok’s cabinet — which represents no parties in parliament — would have no chance of winning a confidence vote.

That Zeman saw an opening and exploited it is testament to his Machiavellian alacrity.

Riding high in the polls, the Social Democrats said in a statement that supporting the cabinet is "one of the possible ways toward an early election and a way to avoid the return of the compromised coalition."

With its record-low approval ratings, its main rival party, the ODS, desperately wants to avoid early elections. A long-dominant force in politics, the party risks losing its position as the chief right-of-center group to Schwarzenberg's TOP '09 Party, which is barely 4 years old.

The vote will come down to a knife’s edge: Center-right parties claim to have 101 votes in the 200 seat-chamber, just enough to win.

Zeman’s critics are especially concerned about the fierceness of his personal ambitions. Many believe that after losing the party chairmanship in 2002, he’s been exacting revenge ever since.

Jindrich Sidlo, a political analyst for Hospodarske noviny — the leading business newspaper — says Zeman twice prevented the CSSD from taking power, once by maneuvering behind the scenes to persuade Social Democrat MPs to betray their party by supporting a confidence vote for a center-right cabinet.

“It's an important feature of Milos Zeman's mind that he doesn't forget things like that,” Sidlo said. “He wants to take revenge.”

Former Prime Minister Vladimir Spidla was part of the CSSD effort to recruit Zeman in the early 1990s, then succeeded him as party leader in 2002. Asked if Zeman was a hypocrite for demanding loyaty he doesn't reciprocate, Spidla cut short the question in an otherwise expansive interview.

“That's his primary feature,” he said pointedly. “He's never been loyal to anyone.”

The president's office says his aim is merely to appoint an apolitical government under which corruption investigations would continue without political interference and a new state budget — often the subject of fierce sparring — could be passed.

But many believe that by installing his protege as prime minister, Zeman hopes to do more than weaken both dominant parties ahead of regularly scheduled elections next June.

“He wants to destroy the political system,” Sidlo said. “He wants to establish a new political power that would be loyal to him, by which he could influence everyday politics.”

Even his critics concede that's no mean ambition for someone who’s been on the political scene for a quarter-century.

“Zeman's almost 70 years and he's had a wild ride,” Sidlo said before comparing him to a famously aging member of the Rolling Stones. “Only he and Keith Richards could survive so long.”