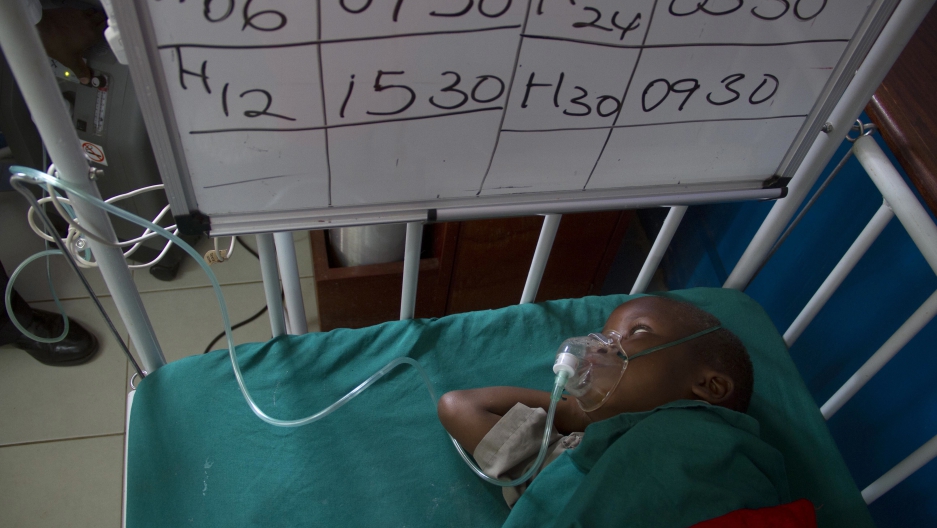 MBARARA, Uganda — Ignatius was no longer conscious when he arrived at the hospital in Mbarara, Uganda.

After experiencing fever and chills, the six-year-old boy, whose last name has been omitted to protect his privacy, began convulsing and then slipped into a coma on July 30. He was suffering from cerebral malaria, a severe form of the disease in which malaria parasites clog the blood vessels of the brain.

“Cerebral malaria cases will die 100 percent [of the time] if not treated properly,” said Dr. Juliet Mwanga, the medical and research director for Doctors Without Borders in Mbarara.

But by late last Friday afternoon, Ignatius’s eyes were open, and he slightly lifted his arm in response to greetings. Covered in a turquoise sheet and red blanket in a special ward in Mbarara Hospital run by Epicentre, the research branch of Doctors Without Borders, he appeared to be out of danger.

His life may have been saved by an experimental malaria treatment that Epicentre is currently testing, which researchers believe could help remove the heavy burden of death and disability from one of malaria’s most lethal strains.

Epicentre researchers are having children with cerebral malaria inhale a gas, nitric oxide. Piped into the children’s noses and mouths from large silver canisters marked “Experimental Study Drug,” nitric oxide is thought to dilate blood vessels and reduce inflammation in the brain. The goal, according to a 2012 article by the Epicentre team, is “buying time” for medicines to kill the malaria parasites while protecting children’s brains from the parasites’ devastating effects.

“Accumulating evidence suggests a protective role for nitric oxide in severe and cerebral malaria attributed to nitric oxide’s modulating the inflammatory response,” researchers wrote in the report (Nitric oxide is not to be confused with nitrous oxide, or laughing gas).

Cerebral malaria is not tracked well, but the statistics available suggest that it claims tens if not hundreds of thousands of lives each year. The World Health Organization estimates that there were about 219 million new malaria cases and 660,000 malaria deaths in 2010. Ninety percent of malaria deaths occur in Africa, mostly among children under five. Cerebral malaria occurs in about 10 percent of child malaria cases in Africa, according to a 2005 study in The Lancet Neurology, and they are the most likely cases to be fatal.

The Epicentre approach seeks to protect children from cerebral malaria’s most dangerous effect: a buildup of malaria parasites that causes inflammation and disrupts blood flow inside the brain. This buildup prevents the flow of oxygen to brain centers that control basic neurological function and even breathing, resulting in convulsions, coma, and eventually, death. Even as anti-malaria drugs such as artemisinins attack the parasites, the inflammation and blockage can still put the child in danger.

Mwanga, the study’s principal investigator, said the team is close to completing clinical trials on 100 children with cerebral malaria. Another team in Jinja, Uganda, affiliated with the University of Toronto and Uganda’s Makarere University, is conducting similar trials. The researchers said they are the first scientists to study nitric oxide as a treatment for malaria, and Uganda is the only country where it is being tested.

The Epicentre team has yet to see its laboratory results, which will measure biomarkers in the blood as a proxy for nitric oxide’s effects — and Mwanga studiously avoided answering questions about whether the treatment appears to work. But she said that, so far, more children are surviving the trials than usually survive cerebral malaria. The Epicentre team’s 2012 study estimated that, worldwide, 10 to 40 percent of cerebral malaria patients who seek medical treatment still die.

“One thing I know for sure is that, in the research setting, the deaths were not as many,” Mwanga said, although she noted that this could be explained by the intensive care setting in which Epicentre was conducting its research.

Death is not the only consequence of cerebral malaria that researchers believe nitric oxide can prevent. Among children who survive the disease, according to the Epicentre study, one in ten suffer long-term neurological damage and one in four suffer persistent learning impairments. These effects can include paralysis, lifetime epilepsy, and loss of hearing and speech.

Nitric oxide, the researchers hope, will also reduce the legacy of disability and spiraling health costs associated with the disease’s long-term consequences.

For six-year-old Ignatius, it’s too early to tell whether cerebral malaria will have any persistent effects — or whether nitric oxide had any impact on its course. But as his eyes take in the ward around him just three days after he had fallen into a coma, there is light at the end of the tunnel.

More from GlobalPost: On the trail of two very different parasites in Uganda