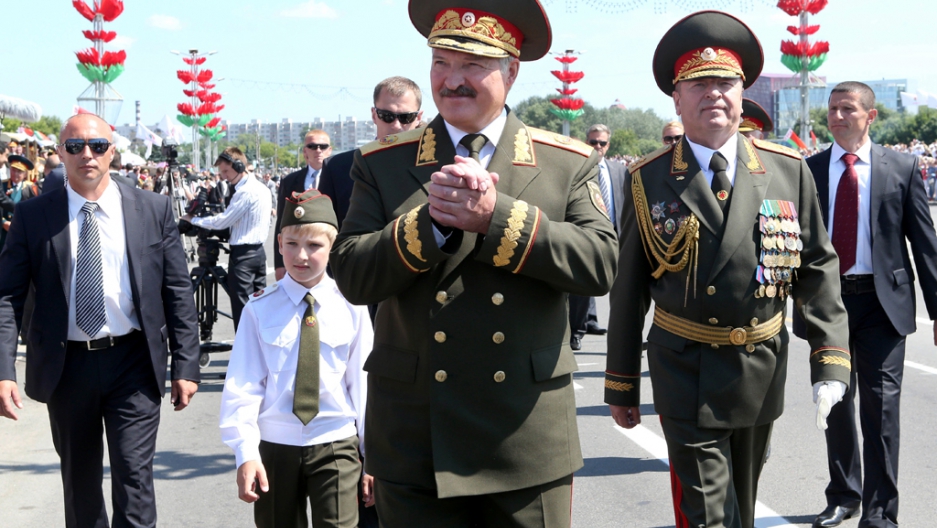 Belarusian President Alexander Lukashenko shocked and amused the world last week when he just had to spin a taller fish tale than his old nemesis and Russia’s head honcho, Vladimir Putin.

But boasts of a 125-pound catfish are not the strangest thing to come out of the buffoonish leader’s mouth — not by a long shot. He has a long history of tripping over his tongue, alternately riling and entertaining his beleaguered citizens.

The authoritarian Lukashenko raised more than a few eyebrows in 2004 when he told reporters, “I refuse to lead my country down the path of the civilized world,” leaving one to wonder just where he thought he was leading them instead.

The 59-year-old president has turned Belarus — a country of about 9.5 million people between Russia and Poland — into a virtual Soviet theme park. The security services are still called the KGB there. He is nostalgic for the good old days, and doesn’t care who knows it.

Dubbed “Europe’s last dictator” by many in the West, he at times embraces the moniker, at others bristles at it.

In March he sounded almost wistful in an interview with Russian television.

“In order to be a dictator and dictate one’s will one has to have the resources: economic, social, military, population, and so on,” he said. “We have none.”

But when German Foreign Minister Guido Westerwelle used the appellation in an interview last year, Lukashenko lashed out.

“It’s better to be a dictator than to be gay,” he spat, in reference to Westerwelle’s homosexuality.

He’s more forgiving of lesbians, acknowledging “if a woman is with a woman it is our fault, we men.”

But he is firm that one must lead “a normal lifestyle.”

“I just don’t like gays,” he exploded in an interview with Belarusian television. “We live in a democratic society and I can say what I want, especially since I am the president.”

Lukashenko, a former collective farm chairman who wangled his way into power in 1994, abolished term limits in 2003.

When a pesky reporter from a London paper asked him at the time why he insisted on staying in office, Lukashenko replied defensively, “I know the queen of England has been in power for a lot longer than eight years.”

The WikiLeaks diplomatic cables portray Lukashenko as “bizarre” and “disturbed,” and speculate that he “intends to stay in power indefinitely.”

They may be right.

Lukashenko has a son, Kolya, who, it is rumored, is being groomed to take over. He sits at Lukashenko’s side during meetings with presidents and popes, and reviews military parades in his very own mini-uniform.

At least Lukashenko has not put his face on the money yet. Belarus’ rubles are decorated with pictures of indigenous animals, from squirrels and rabbits to moose and bison.

But money is a sore point for a president whose economy is all but in the toilet. Heavily reliant on Russian subsidies, Belarus is running out of cash, and Russia may be running out of patience.

Lukashenko has never been a particular favorite of the Russian president. The Belarusian leader was for years trying to arrange some sort of union between his country and Russia, for some reason convinced that Moscow needed Minsk, Belarus’ capital, as much as the other way around. This prompted Putin back in 2002 to say quite sharply, “We need to keep the flies separate from the cutlets,” leaving no doubt who was the insect and who was the meat.

Lukashenko is even less popular with Europeans and Americans, who are still smarting from having been kicked out of their diplomatic compound in 1998.

The leafy enclave of Drozdy was home to most first-world ambassadors at the time, but Lukashenko wanted to make it his residence. When the ambassadors refused to renegotiate their leases, he simply shut off their water and electricity.

This led Washington to recall its envoy, Daniel Speckhard, who did not return for a year.

It also sparked the first travel ban against Lukashenko and his top government officials: They were no longer welcome in Western capitals.

The restrictions continue to this day. In fact, when Lukashenko prepared to go to the London Olympics last year, he was denied a visa.

This was a bitter blow to the keen sports aficionado, who had a modern “ice palace” built in Minsk for his athletic pleasure.

His sense of fair competition, though, needs some adjustment.

“I love football and hockey, but I mostly play by myself,” he told reporters.

Never has this reluctance to face challengers been more in evidence than during the last elections.

He won the 2010 poll in a landslide, although, according to the Organization for Security and Cooperation in Europe (OSCE), "The presidential election indicated that Belarus has a considerable way to go in meeting its OSCE commitments for democratic elections.”

Lukashenko, in fact, admitted to juggling the results — but only to lower the magnitude of his win.

“We did falsify the last elections,” he told the Belarus news agency, BelaPan. “It was 93.5 percent who voted for Lukashenko, but they said that would not be a European standard … so we made it 86 percent.”

Lukashenko has always been a bit touchy on the issue. During the 2001 ballot, when the OSCE wanted to install a monitoring system for the elections, he exploded.

“We do not need an imported system for falsifying elections!” he thundered, in a speech shown on Belarusian TV. “We will create our own, a state one!”

Lukashenko considers himself a strong leader, and has a soft spot for others he considers to be like him.

“The history of Germany is a copy of the history of Belarus,” Lukashenko told Russian television in 1995. “Germany was raised from the ruins thanks to firm authority, and not everything connected with that well-known figure, Adolf Hitler, was bad. German order evolved over the centuries and under Hitler it attained its peak.”

Lukashenko does have a brutal streak, and many have felt the weight of his anger.

Over the years several prominent figures have disappeared — an opposition politician, a former interior minister and a noted photojournalist among them.

In 2001, two investigators from the prosecutor general's office fled to the United States, where they accused some of the government's top security aides of setting up a death squad that had killed up to 30 critics.

Those who dare to stand against the president are routinely intimidated, beaten, or arrested.

All three happened to Andrei Sannikov, an opposition leader who ran against Lukashenko in 2010. He was arrested during the protests that followed the elections in December 2010, and beaten so severely that his legs were broken.

He was denied medical care, and sentenced to five years in prison. Released in 2012, he fled to Britain.

His wife, Irina Khalip, a prominent journalist, has been under virtual house arrest for years, and the authorities have threatened to put the couple’s small son, Danil, in an orphanage.

There is a small but committed cadre of dissidents who are working energetically for Lukashenko’s removal. They receive generous funding from a variety of Western donors, but so far their efforts have had limited success.

The president is especially unpopular with many of the younger generation, which longs for freedom and opportunity. According to one Belarusian woman who has since left the country, students in the late 1990s would start every party with a fervent toast: “To the sniper.”

Jean MacKenzie spent three years in Belarus, 2000-2002, as head of a media development program for the International Research and Exchanges Board (IREX).