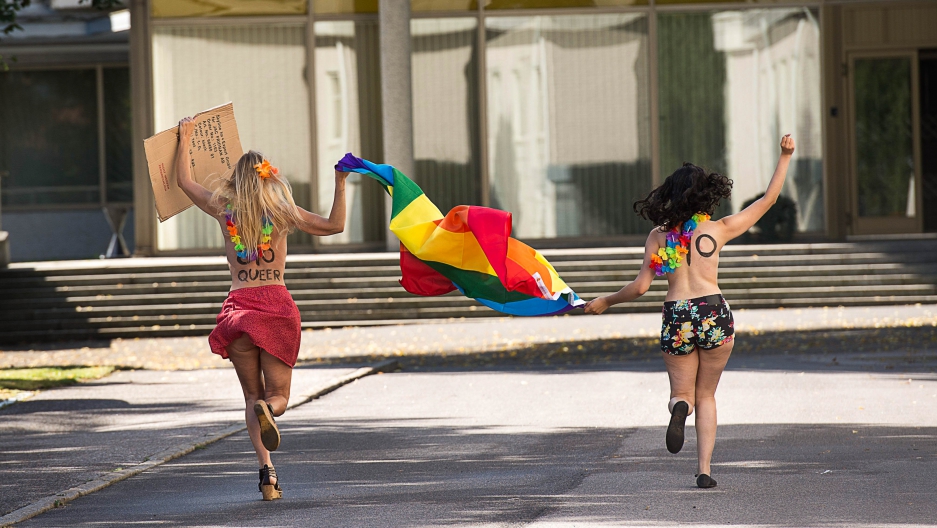 August 1, 2013- Two topless Femen activists run as they hold up a rainbow flag and a sign saying: "homosexual propaganda on Russian ground", the women climbed over the fence into the Russian embassy in Stockholm, Sweden, during the Stockholm Pride week celebrations, to protest against the country's anti-gay bill and stigmatization of homosexuals.
Credit: JONAS EKSTROMER
Share

It has been one week since the International Olympic Committee told Russian state-owned news agency Novosti that athletes and spectators at February’s Winter Olympic Games would be exempt from the Federation’s new law against homosexual propaganda.

Even though that news did not quell demands for boycotts of the Olympics and Russian vodka, it was considered—albeit hesitantly so—a potential step toward safety for those attending the games.

Now, Vitaly Mutko, Russia’s sports minister, is saying this is not the case.

"An athlete of nontraditional sexual orientation isn't banned from coming to Sochi," he told R-Sport, the sports newswire of state news agency RIA Novosti. "But if he goes out into the streets and starts to propagandize, then of course he will be held accountable."

Contrary to the assurances made by the International Olympic committee just seven days ago, Russia will in fact enforce its contentious law, which was signed by President Vladimir Putin in late June.

Mutko, according to the AP, went on to stress that the law is not “designed to punish anyone for being gay or lesbian,” and that “athletes would be punished only for propaganda,” a word that remains legally vague.

Still, punishment for foreigners who are accused of violating the law include fines of up to $3,000, as many as 15 days in prison, deportation and denial of reentry into Russia.

While some activists continue to call for Olympic bans and vodka embargoes in bars across North America and Canada, others have suggested “individual gestures and called for protests, such as a pride parade, to be held during the games.”

Frida Ghitis, a world affairs columnist for CNN, wrote just this morning that “an Olympic boycott might not be the best way to go.”

“Instead, let's turn the Winter Games into the gayest games in history,” she added. “Let the Russian police, if they want, arrest every athlete, every coach from Europe, North American, Australia and other forward-looking countries — that includes you, Uruguay, Brazil, Mexico and South Africa. The teams should march during the opening ceremonies brandishing rainbow flags, holding hands, proclaiming that every one of them supports equal rights for gay and lesbians — in Russia and everywhere else. Make it an ‘I am Spartacus’ moment for the world.”

The grand idea hardly seems like it would be out of place in the landscape of other recent gay rights related news throughout Europe and the US, even if the motivation behind this particular anti-gay law is unique to Russia, as Moscow-based correspondent Miriam Elder explained yesterday.

What has been largely perceived as Russia’s campaign against gays, Elder wrote, is not seen as such by Yelena Mizulina, head of the Russian Duma’s committee for family, women and children. Instead, she insisted, it is “part of the country’s very search for survival.”

“On the one hand, there’s its physical survival – Russia’s birthrate plummeted in the wake of the Soviet collapse and encouraging baby-making (through government grants as well as rhetoric) has been one of Vladimir Putin’s hallmarks,” she wrote.

“And then there’s its moral survival – if Russia is to survive as Russia it needs to reject the corrupting influences of the West. The first form of reasoning is populist bluster. But the second goes some way toward explaining why Russia has stepped up its campaign against LGBT rights just as the European Union and the United States march in precisely opposite direction. The violent images, restrictive legislation, and public humiliation that LGBT people in Russia now face isn’t the product of a traditionalist backlash as much as it is a vital part of the new politics of Putin’s Russia, a nation in search of someone to define itself against.”

This is similar to the understanding Harvard professor Susan Abraham expressed – back when the law was first passed by the lower house of the Russian parliament in mid-June — who added that “repressive religious practices against women and sexual minorities is nothing new in the nation states that are attempting to be ‘different’ than Western secular capitalism.”

Still, International Olympic Committee spokesman Mark Adams stated Thursday that the committee “continues to accept past assurances from the Russian government that the law will not affect athletes, officials or spectators during the games.”

Gerhard Heiberg, a senior committee member from Norway also spoke to the new development on Thursday saying that Russia and the city of Sochi had “committed to preventing discrimination of any sort,” when they won the games.

He nonetheless issued cautionary advice to athletes, warning them not to participate in international calls like Ghitis’ for “the gayest games in history.”

"We always say to our athletes, `We do not want any demonstrations in one or the other direction. Please, you are there to compete and behave. Please don't go out on the Net or in the streets,'" Heiberg said. "I think it was very clear for London in 2012 and it will be very clear in 2014. Demonstrations in one way or another, no, but discrimination, absolutely not.”