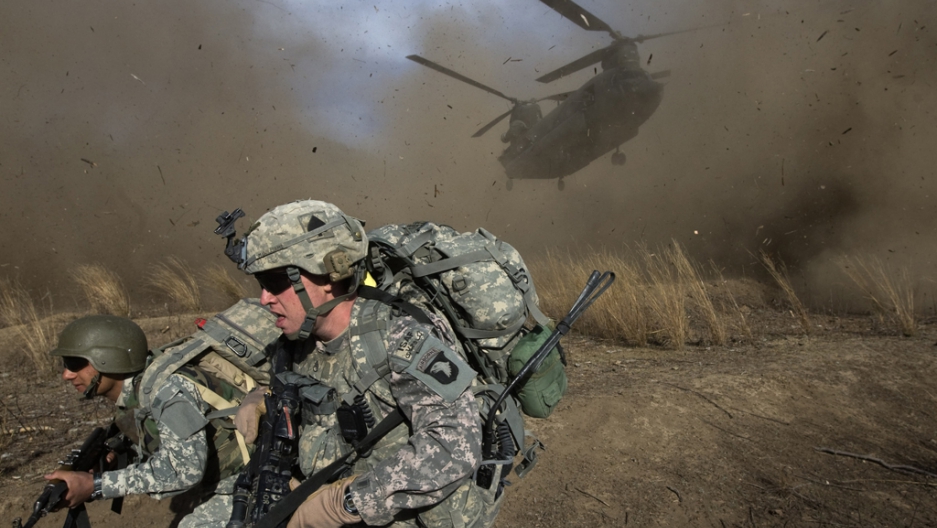 In this photo taken on Nov. 11, 2009, US Army soldiers race to get out of the way of a CH-47 Chinook helicopter landing in the Khost province of Afghanistan.
Credit: David Furst
Share

The verdict is in and the sentencing phase has begun in the trial of Bradley Manning, the young Army private who transferred more than 700,000 pages of classified data to WikiLeaks.

He could face over 135 years in prison for espionage and theft crimes.

But now the debate is shifting from how guilty he was to what harm he may have caused. The prosecution’s first witness on Wednesday seemed determined to continue that trend.

Retired Brig. Gen. Robert Carr said the military had been “hit in the face” by the leaks, which he said had harmed the US mission in places like Afghanistan by eroding the trust the military had with the local populace.

“We were very concerned that folks might choose not to talk to us anymore because the information that came out could be detrimental to their livelihood,” the general said.

Yet the talk of trust between the US military and the local Afghan population may sound hollow to many who spent time in that war-torn nation.

The relationship had already been damaged by the numerous airstrikes and night raids that caused thousands of civilian deaths — how many has never been adequately documented, but researchers estimate the total number of civilian casualties to be close to 20,000.

One such incident, an airstrike near the village of Garani, in Farah province, in May 2009, figured prominently in Manning’s trial. He was charged with having leaked a video of the raid, which, according to WikiLeaks founder Julian Assange, "documented a massacre, a war crime."

The Garani airstrike allegedly killed as many as 147 villagers, making it the worst civilian casualty incident up to that time.

The US military never acknowledged the full scale of the tragedy, insisting that 20 to 30 civilians had died, along with 60 to 65 militants. They did, however, issue a report documenting procedural errors that could have led to the deaths.

The substance of the video was not at issue in the trial. Instead, the prosecution focused on timing. The charge sheet alleged that Manning had leaked the video shortly after his arrival in Iraq in October 2009. Manning pleaded guilty to transferring the file in the spring of 2010.

The prosecution apparently failed to connect the dots, and the military judge acquitted Manning of leaking the video. That was one of just two counts — of the total 22 counts lodged against him — for which he was found not guilty. The other was the most serious charge of aiding the enemy.

The Garani video was never actually released. According to Assange, a disgruntled ex-employee of WikiLeaks destroyed it.

In the chat logs between Manning and Adrian Lamo, the internet hacker in whom Manning confided and who turned him over to the authorities, Manning insisted that the Garani video was no big deal.

“It’s not nearly as damning … it was an awful incident, but nothing like the Baghdad one,” Manning said in the chat, referring to the “Collateral Murder” video released by WikiLeaks in April 2010.

That video was perhaps the most talked-about piece of material Manning gave to WikiLeaks.

It showed the deaths of civilians in a Baghdad suburb in 2007 during an attack by a US Apache helicopter. Two Reuters staff were killed along with several others, including children.

Reuters says it had been trying to get the video under the Freedom of Information Act since 2007, with no success.

This is, in fact, the crux of the matter, according to David Schanzer, director of the Triangle Center of Terrorism and Homeland Security at Duke University. If the government does not release material legally, then journalists and officials have no other recourse but to break the law.

“We live in an era of over-classification of virtually all information dealing with national security and foreign policy,” Schanzer told GlobalPost. “We have to have legal methods of exposing government wrongdoing.”

Many argue that the tsunami of details included in WikiLeaks’ Iraq and Afghanistan war diaries brought little of substantive value to the public debate.

Andrew Exum, a fellow at the Center for a New American Security who also served as an Army officer in both Iraq and Afghanistan, said as much shortly after the diaries were published in 2010. Writing in the op-ed pages of The New York Times, Exum said he had a hard time understanding “what all the fuss is about.”

“Most of the major revelations that have been trumpeted by WikiLeaks’s founder, Julian Assange, are not revelations at all — they are merely additional examples of what we already knew,” he said.

We did not need WikiLeaks, for example, to tell us that Karl Eikenberry, the retired Army general who served as the US ambassador to Afghanistan from 2009 to 2011, distrusted Karzai and wasn't a fan of the troop surge advocated by the military command in Afghanistan. That information was on the front pages of major newspapers, along with classified cables that Eikenberry sent to Washington.

The leak of those cables has not been prosecuted. This is part of what Schanzer called a “gentleman’s agreement” between the media and the government, in which trusted reporters or media outlets are given access to carefully controlled amounts of classified information that someone in the government wants to float in the public sphere.

WikiLeaks, however, blew the gentleman’s agreement out of the water, which may account for the zeal with which the government has prosecuted Manning.

But it also deluged the public with so much raw information that almost no one could make sense of it.

More than three years ago, journalist Glenn Greenwald, then writing for Salon.com, predicted that WikiLeaks would have much less influence than anticipated.

“It’s not difficult to foresee … that media coverage of the latest leak will be about whether or not it should have been published, rather than about what these documents reveal about the war effort and the government and military leaders prosecuting it.”

That does, in fact, appear to be the case.

The Manning-Lamo chat logs show a deeply troubled young man, struggling with issues of sexual identity and aghast at the materials he sees in his job as a military intelligence analyst.

“It’s important that it gets out,” he wrote. “I feel for some bizarre reason it might actually change something.”

He later said in a statement, "I had information that needed to be shared with the world. I wrote that the information would help document the true cost of the wars in Iraq and Afghanistan."

Manning did not end the wars, but his trial could yet lead to a real debate on government secrecy.

“I would like these episodes [of Manning and Snowden] to initiate a broader discussion and lead to more vigorous duty for people within the government to disclose government wrongdoing,” said Duke University’s Schanzer.

This may provide cold comfort for a young man who set out to change the world.