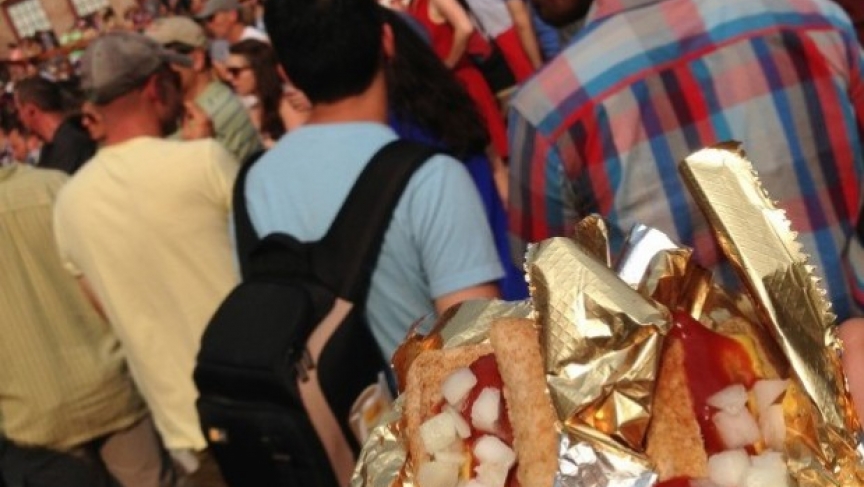 Today, The World launches a new series on climate change and the future of food.  Host Marco Werman speaks with The World's environment editor Peter Thomson about the inspiration for the series and some of what we'll hear over the next couple of months.

It’s one of my favorite questions, always.

You listeners have been helping us with answers in recent days, Instagramming your meals using the hashtag #whats4lunch, and telling us how what you eat has might be changing because of climate change.

What's for lunch. It's also the name of an upcoming series of reports on The World.

The World's environment editor Peter Thomson is producing and editing the series.

Why are we featuring these stories, Peter, and why the name - What’s for Lunch?

Peter Thomson: Well, the inspiration for the series was really just a couple of facts that are at once very simple and incredibly complicated. The first is that growing enough food is really the basis of human civilization.  It's always been a big challenge, but it's becoming even more so because of the second of these facts, which is that agriculture is really right in the cross-hairs of climate change.

Werman: Alright, how so?

Thomson: Some of the most basic effects of climate change will have huge impacts on agriculture.  Think of things like rising sea levels, rising temperatures, changing patterns of rainfall and drought, where and when insects show up.

So how we get our food will change. And together with the folks at Homelands Productions, who are our partners in this project, we wanted to talk with people around the world who are working on some of those changes.

As for the name, lunch I guess is in some ways the most ordinary of meals, and we thought it would help capture how this massive global challenge is going to affect some of the most mundane parts of our lives.

Werman: My own little contribution to this global challenge is, I try to shop as locally as possible. I've been illustrating my habits on Instagram like our listeners, using that hashtag #whats4lunch. And it's making me think, but the toughest thing about all this climate change vs. food puzzle for me is getting information about the food I eat, where it comes from. How is all this affecting you personally?

Thomson: Well, I think about this stuff all the time and it’s just as much of a challenge for me and my family, I think, and as it is for you and everybody else who tries to be aware of the environmental impact of their food.

Where our food comes from, your question, is certainly a big part of the question, not merely because of the "food miles" issue - how far our food travels to get to us - but also because one really important response to the challenge of climate change is building local resilience.  Food supplies are going to be disrupted, to different degrees in different times and different places, which makes it really important for every region to be as self-sufficient as possible. Not an easy task of course, no place will ever be able to completely achieve it.

Just as important of course are things like cutting down on the energy and other inputs that go into your food.

There are resources out there that can help people figure these things out but it can still be incredibly difficult. Our hope is that this series and our online components of it will help our listeners at least a bit.

Werman: So what are some of the highlights?

Thomson: Well, we're going to be looking at solutions people are working on around the world - local, global, high tech, low-tech. So just to illustrate that range, among other places we'll go to Mexico, where a grain that once was a staple there is being brought back. It’s called amaranth, it’s extremely nutritious. Just as important, its very resistant to drought, heat and pests.

We'll also go to the Netherlands, where researchers are exploring alternatives to traditional animal protein, among them things like lab-grown meat.

Werman: Lab-grown meat, I don’t know how I feel about that.

So what are we going to hear today?.

Thomson: So to kick things off we're heading to Singapore, which is one of the most crowded places in the world. We’re going to look at the emerging phenomenon of super-efficient vertical farming.  Our reporter for today's story is Sam Eaton.

Werman: Alright, let’s get in the elevator. Thank you, Peter Thomson, The world's environment editor.

Categories:
EnvironmentEnvironmentWhat's For Lunch: The Future of Food in a Changing World
Tagged:
Peter Thomsonfoodwhats for lunchsciencefood for 9 billion