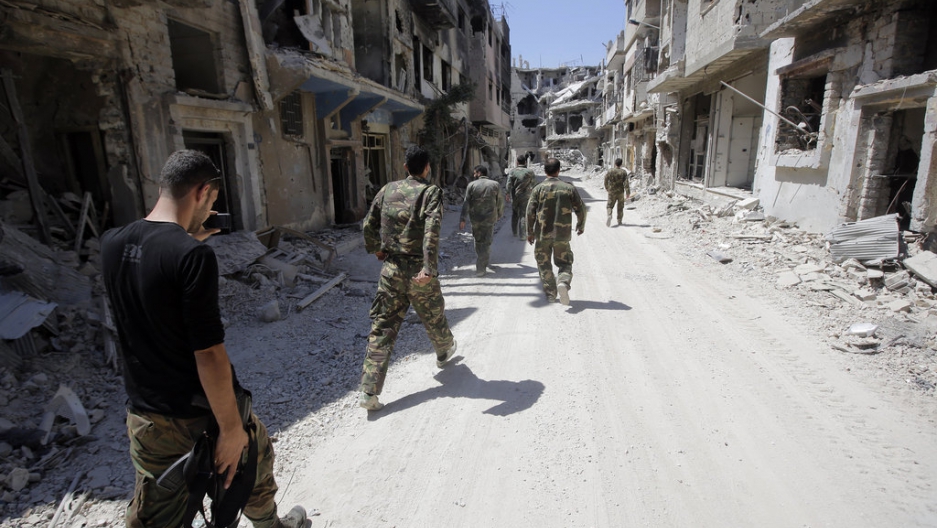 Soldiers of the Syrian government forces patrol in a devastated street on July 31, 2013 in the district of al-Khalidiyah in the central Syrian city of Homs. The Syrian government announced the capture of Khalidiyah, a key rebel district in Homs, Syria's third city and a symbol of the revolt against President Bashar al-Assad.
Credit: Joseph Eid
Share

BEIRUT, Lebanon — Syrian peace has proven illusory, and simply getting the opposing sides to the negotiation table has so far proven impossible.

Over the past two years, two UN envoys and the Arab League have tried to negotiate a peace settlement. Most recently the US and Russia have called for a Geneva peace conference, but they keep postponing a meeting date in the face of shifting military developments.

But Syrians need not look to outside powers to solve their differences, according to some Lebanese leaders. They suggest that the Lebanese peace agreement that ended this country's brutal 15-year civil war might offer an effective approach to peace.

In 1989 the warring factions in Lebanon's civil war came together to sign a groundbreaking agreement in Taif, Saudi Arabia. The Taif Accords, as they became known, codified a ceasefire, called for disarming all militias, and provided for parliamentary elections and mutual recognition of the rights of all religious and ethnic groups.

"The principles of Taif certainly can be applied in Syria," Hussein al Husseini told GlobalPost. "The ethnic and cultural makeup of Syria and Lebanon are quite similar."

Husseini, now 76, was speaker of the Lebanese parliament in 1989 and is known as the father of the Taif Accords. He is a Shia Muslim.

Husseini's opinion is sharply contested by Lebanese leaders supportive of Syrian President Bashar al-Assad. Ali Fodda is a top leader of the pro-Assad Lebanese Arab Democratic Party, which is composed mostly of Alawites, a minority religious group to which the Assads belong.

"The Taif principles can't be applied in Syria at all," he said. "The Syrian government wouldn't accept such an agreement with divisions by sects."

Just as in Syria, Lebanese continue to debate how to build a multi-religious society with a parliamentary system that fairly represents all groups. Lebanon still struggles with that question because, at least in part, the Taif Accords were never fully implemented.

The Lebanese civil war began in 1975 as a battle of the country's poor and underrepresented Muslims against wealthy Christians. The French had favored a Maronite Christian elite during colonial times, and the political and economic conditions hadn't changed a lot since.

The Palestine Liberation Organization (PLO) had also made its headquarters in Beirut and eventually joined the fighting on the leftist side. The Israelis allied with the right-wing Christians and invaded Lebanon in 1978. In 1982 Israel invaded again and occupied a stretch of southern Lebanon until forced out by Hezbollah in 2000.

To make the situation even more complicated, the Arab League authorized Syria to send peace keeping troops to Lebanon to quell the fighting. Syrian troops arrived in 1976, but didn't depart until 2005 in response to mass demonstrations in Beirut.

Many Lebanese and Syrians supported Syria's initial peacekeeping goal but soured on the troop deployment when it lasted for decades, according to Sheikh Nawaf al-Bashir, a Syrian opposition leader interviewed earlier.

"If a sick man invites a doctor to treat him, does that mean the doctor should come live in the same house?" asked Bashir with a smile.

By the end of 1989 all the factions were exhausted. Different religious and ethnic groups had consolidated military and political power is various regions of the country. The Syrian occupation had brought some stability. No side thought it could win militarily. So the time was ripe for compromise and rebuilding the shattered country.

Lebanese leaders convened a series of meetings in Taif aimed at addressing the civil war's underlying problems. Lebanon had functioned under a confessional system in which Christians, Sunni, Shia and various minorities were allocated power. The parliament was elected strictly along confessional lines, with Shia Muslims in south Beirut, for example, only able to vote for Shia parties.

The Taif Accords replaced the confessional system that favored Christians with one that gave equal power to both Christians and Muslims. The Accords mandated a transitional period after which the parliament would be elected based on one person one vote, and a Senate elected along confessional lines would be created. The Senate was to be a weak body with real power lying in the parliament and presidency.

Husseini emphasized that the accords called for more than "coexistence" of confessional groups but for a "life in common." All Lebanese were to enjoy "freedom and equal opportunity," he said.

The Accords also called for disarming all militias and building of a non-sectarian, national army and police. They demanded the immediate withdrawal of Israeli troops and pull out of Syrian troops within two years.

The peace pact had some immediate dividends. Beirut, once known as the Paris of the Middle East, was rebuilt in the 1990s. The Green Line, a gash of barricaded buildings and destroyed streets, was replaced with high rise apartments and even a Virgin Megastore. Buildings along the seaside boulevard known as the Corniche once held sniper's nests. Today women in off the shoulder blouses and others with stylish hijabs stroll down its wide sidewalks.

But, all sides agree, the Taif Accords were never fully implemented. Just one year after the signing of the peace pact, Iraq's Saddam Hussein invaded Kuwait. World attention shifted away from Lebanon towards the looming war in the Gulf.

Syria joined the US-led coalition in the first Gulf War, breaking with its old ally, the USSR. So the US never insisted on Syrian withdrawal from Lebanon.

Israel also ignored calls for its withdrawal. Hezbollah, a Shia political party and militia, refused to disarm, arguing that it was a resistance force to Israeli occupation. Other political parties covertly maintained their militias as well. While armed conflicts periodically erupt, the civil war never resumed.

Meanwhile, the various parties representing confessional groups entrenched themselves, enjoying the privileges and corruption of power. They never implemented Taif's plans for eliminating the confessional system.

Despite these very real shortcomings, some politicians and analysts argue that Taif has positive lessons for Syria.

When the warring factions in Syria have exhausted themselves, the groups could apply a Taif style agreement, according to Husseini. First there would be a ceasefire, all foreign powers would stop arms shipments, followed by elections for a constitutional council, he said.

Elections would be based on districts and party lists, not on religious and ethnic groups. Sunnis, Shia, Alawites, Christians, Kurds and others "would have representation based on their geographic concentration," said Husseini.

Elie El-Hindy, chair of the Political Science Department at Notre Dame University outside Beirut, said, "The Lebanese political system, in spite of its many flaws, still serves as a very good model. Parachuting a western model to the region will never succeed."

He said US and Iraqi leaders misapplied lessons from Taif in constructing the new government in Iraq. The Shia majority holds power there, he noted, but minority Sunnis, Christians and Kurds are angry because their rights are not protected.

El-Hindy noted that Sunni Muslims make up a majority in Syria, but any future government must respect both the majority will and minority rights. "Arab Sunnis can never rule by themselves excluding everyone else."

Others sharply disagree on the efficacy of Taif.

Rev. Simon Faddul, president of the Catholic charity Caritas in Lebanon, said applying Taif to Syria would be a disaster. He said Taif never really stopped the fighting in Lebanon, pointing to current armed clashes in Sidon and Tripoli.

"The Syrian situation [will] take much more than an international accord," he said. Referring to the increased sectarian fighting, he said, "They have awakened a giant and it won't go back to sleep that easily."

That awakened giant is vexing US and international policymakers as well.

In 2011 the UN appointed Kofi Annan as a special peace envoy tasked with negotiating an accord between Assad and the rebels. He resigned in frustration. Lakhdar Brahimi took over on behalf of both the UN and Arab League. The Algerian diplomat played a major role in negotiating the Taif Accords. But in Syria he has been stymied by intransigence on all sides.

In May the US convinced Russia to jointly call for a Geneva peace conference. Assad agreed to attend but the opposition initially refused, making its participation contingent on receiving US arms. In late July Ahmad al-Jarba, president of the National Coalition of Syrian Revolutionary and Opposition Forces, said his group would attend a Geneva conference, but this week revised his position, saying “We will not go to any negotiations until the Free Army and revolutionary forces are strong on the ground and cohesive as they were eight months ago.”

When Assad's army, together with Hezbollah, retook the city of Qusayr in early June, it dealt a further setback to the US and the rebels.

A short time later the Obama administration announced plans to supply small arms to the rebels, after having provided covert arms shipments and training for some 18 months.

That decision to escalate US aid to the rebels brought a rebuke from UN General Secretary Ban Ki-moon, who said it was “not helpful.”

“There can be no military solution to this conflict, even if the government and the opposition, and their supporters, think there can be," he said.

Skeptics say neither Assad nor the rebels are prepared to stop fighting, so the Geneva conference faces huge obstacles, if it takes place at all.

"Geneva won't result in anything," said Husseini. He called for an end to all outside funds and arms, including those from Iran, Saudi Arabia, Turkey and the US.

Future Movement Member of Parliament Bassem Shabb agrees that Geneva is unlikely to resolve Syria's problems, but it might help Lebanon, which is facing increasingly violent spillover from the war.

Perhaps the US and Russia can "produce a settlement for Lebanon," he said, "some kind of joint international protection of sovereignty."

Shabb would like to see an expanded role for UN troops who could help stop fighting along the Syrian-Lebanese border.

Shabb and others noted that the prospects for peace talks have become more difficult with the rising influence of ultra-conservative jihadists in the rebel ranks.

"It's too late now," Archbishop Issam Darwish said. "Al Nusra and other Jihadists don't listen to the USA or anyone. The mistake of the US was allowing those groups to come to Syria."

Others remain optimistic. When both sides no longer think they can win militarily, they will have to turn to negotiations, said Husseini.

"Then the lessons of Taif can prove helpful."