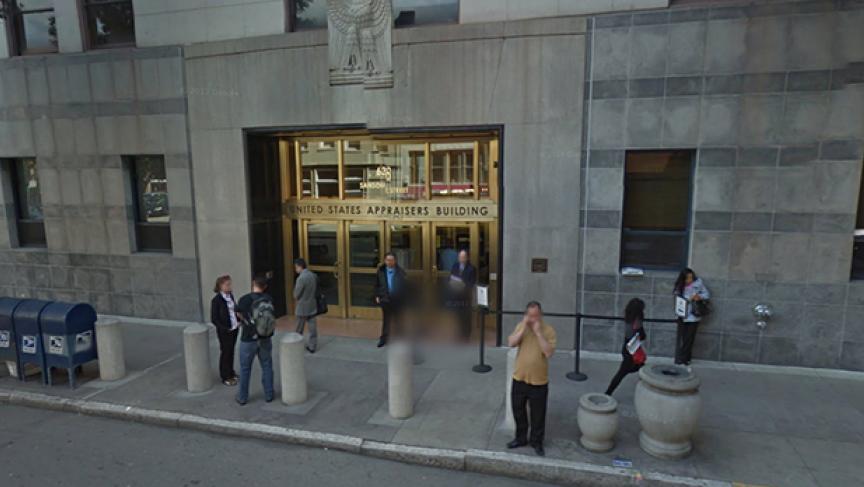 Bertha Mejia's case is being heard at this immigration courthouse in San Francisco. (Photo courtesy of Google Maps.)

Magdalena Martinez is in a waiting room in a large courthouse in San Francisco. Immigration court.

In 2011, immigration officers came to Mejia’s home in Oakland. There was raid in the neighborhood. Martinez remembers that morning.

“I got a phone call from my sister, Vanessa, saying that immigration had come and picked my mom up. So I rushed to my mom’s home and, yeah, she wasn’t here,” Martinez said.

Her sister, Vanessa Madrigal, was there when officers approached her mother’s home.

Mejia was one of several people arrested that day. That was nearly two years ago. Ever since, she’s fought to remain in the U.S., from a jail used for immigrant detainees that’s hours away.

Madrigal says they hope the judge will let Mejia fight deportation from outside a cell and rejoin the family.

“She’s the caretaker for Pablo, my sister’s son, and for my daughter, Jasmine,” said Madrigal. “So, they spent a lot of time with her.”

Mejia walks into the courtroom, ushered by a guard. She is 54 years old, petite, with curly hair. She wears an orange uniform and has shackles on her ankles and wrists.

There is a lot at stake. Mejia left El Salvador more than 30 years ago. All of her family is here in the United States: siblings, her daughters, her mom, grandkids.

Her case also isn't rare. America’s population of detained immigrants has ballooned to more than 400,000 as enforcement tightens. Most detainees are like Mejia: undocumented — but not violent criminals. Critics say there are cheaper, more humane ways to treat these immigrants while their cases are pending.

She says, “I think if the American public knew really what was going on and how their taxpayer dollars were spent — and also that we are spending our energy detaining women with no history of violent crimes, I think a lot of minds would be changed and I think reform what happened more quickly.”

In court, Mejia tells her story in Spanish. Judge Anthony Murry listens through an interpreter. She tells how she left El Salvador because of war, poverty and sexual abuse. In California, she has worked as a cook and housecleaner.

Then, in 2005, she was raped by a man whose house she cleaned. It added to Mejia’s history of abuse. After the rape, she got a DUI and got caught several times shoplifting food. A psychologist testifies at the hearing that Mejia’s crimes stem from post-traumatic stress disorder, arising out of a childhood of sexual abuse, which the 2005 rape exacerbated.

Then, the family waits for several hours in a hallway outside of the courtroom, hoping for a ruling to be issued the same day. Turns out, the ruling comes in a few days later.

The judge rules that Mejia must remain in detention. He rules she poses a danger to society because of her history of petty theft and driving under the influence — and that she is a flight risk despite her close family ties in California and the persistence she has shown to continue her case.

Mejia’s lawyer, Rosy Cho, is also fighting back with appeals. She says Mejia is eager to improve herself.

“This is a woman who has suffered a lot in the past and hasn’t always made the right decisions,” Cho said. “Does that mean that we throw her away and separate her permanently from all her family in the United States?”

Mejia talks from behind Plexiglass in the courthouse. She rejects the judge’s position, that she’d disappear if let out of detention.

“Where would I go?” she said. “I have children, grandchildren here. I’ll try to win my case.”

And what if she’s deported to El Salvador, after 30 years away? Mejia says she’s afraid. She only has distant, ugly memories of the place. Then, Mejia is bused back to detention.

The latest news is she’ll be transferred to another facility, farther away.