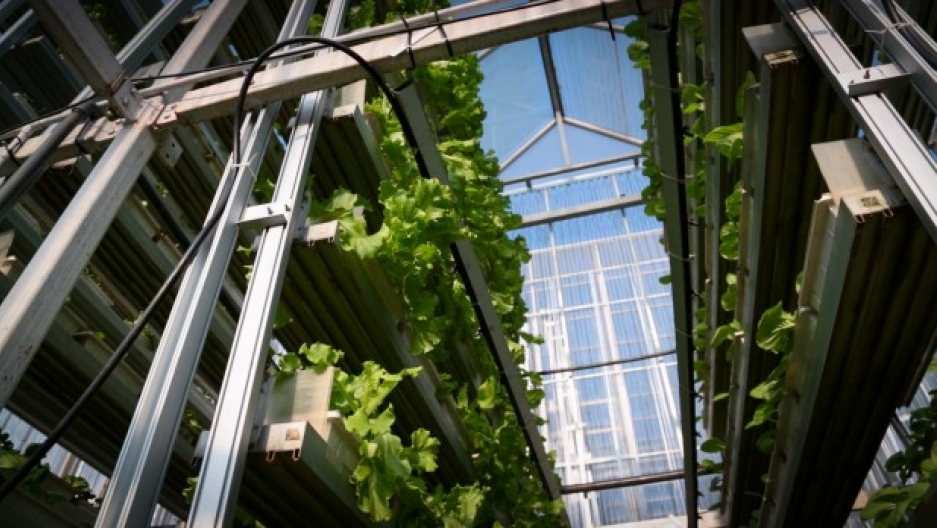 With a footprint of about 65 square feet, each SkyGreens tower offers a ten fold increase in productivity per unit of land. (Photo: Sam Eaton)

A new super-efficient vertical farming system in Singapore is producing greens for the 5 million residents of the crowded city-state. The system is helping increase Singapore’s food security, while also helping cut down on the climate impact of food production. Sam Eaton reports, in the first part of our “What’s for Lunch” series.

Every night around midnight hundreds of trucks enter Singapore from Malaysia and beyond to unload their cargoes of imported fruit and vegetables at the sprawling Pasir Panjang wholesale center. Buyers pick through bins of bok choy, chives and eggplant, then load their goods onto smaller trucks, and fan out before sunrise across this crowded city-state of more than five million people.

It’s a window into the complex daily supply chain of fresh food in a country that grows only seven percent of its produce. It’s also a window into the future. A recent report by the Potsdam Institute projects that over half of the world’s population could rely on food imports by 2050, a trend driven by more and more people moving to cities and more and more farmland succumbing to sprawl and a changing climate.

But that’s according to the old paradigm, where food was something that came from the ground.

Here in Singapore, there’s a new paradigm rising on a nine acre industrial plot on the city’s urban fringe, where 50 year-old entrepreneur Jack Ng is building a series of what look like giant shrink-wrapped boxes nearly four stories tall.

Walk inside the transparent structures and you enter one of the most efficient food production systems on the planet, called SkyGreens.

Inside, hundreds of 30-foot tall aluminum A-frames structures are stacked to the ceiling with tiers of lettuce and Chinese cabbage arranged in a circle, each rotating like a Ferris wheel. It’s a technology Ng invented, and it’s built around what he calls his “water wheel.” Basically the system’s hydraulic engine, the water wheel is a turbine that’s spun by water flowing down through a pipe from a tank near the top of each A-frame.

“The electricity we use, it’s three dollars per month for this whole tower,” Ng says, about the equivalent of running one 60-watt light bulb.The turbine rotates each tower’s 38 tiers of plants, ensuring equal exposure to the sunlight above and a micro sprinkler system below. All the water is filtered and reused. The greens are grown without chemical inputs, in organic soil composted from food waste. And it all runs on a low-power pump that returns the water to the top.

Each of the A-frames costs around 12-thousand dollars to build, but their small footprint makes them up to ten times more productive per square foot than conventional farming. And in a country with the third densest population on the planet and some of the world’s highest land values, that cost to productivity ratio is key to SkyGreens’ early success.

Lee Sing Kong, who directs Singapore’s National Institute of Education, says any urban farming model here must be highly productive, “because Singapore is an open market—whatever we produce must compete with the prices of vegetables coming into Singapore. “

At the supermarkets where many of those imports end up, SkyGreens produce sells for only about ten percent more than greens from Malaysia and China. That premium reflects both the high start-up costs and the high rents for Singapore land.

But the price will only fall as the technology advances, says Columbia University ecologist Dickson Despommier. Despommier says a good example of that is the rising efficiency of LED lighting, which he says will eventually reach 100 percent.

“That’s not too far in the distant future,” Despommier says. “And when that happens, you will be as efficient as a plant (at) converting sunlight to chemical energy.

Which would enable urban farming to move into vacant office towers and repurposed factories, since energy costs and sunlight would no longer be limiting factors. And with advances in aeroponics, in which nutrients and water are sprayed directly onto exposed plant roots, even soil becomes unnecessary.

Despommier says much of this is already happening—not just here in Singapore but also in places like Vancouver, Tokyo, and Brooklyn.

Premium leafy green vegetables and micro-greens are the main crops today. But Despommier says that’s just the beginning. In the very near future, he says, the technology will start to encompass basic crops like rice, wheat, potatoes and other root vegetables.

“And then you’ve got this industrial snowball that will start, and the next thing you know you have Singapore producing 10-15-20-30 % of its produce,” Despommier says.

And that’s exactly what Singapore hopes to achieve. The city has invested 20 million dollars in a fund to boost domestic produce, fish and egg production through new technologies like SkyGreens.

Jack Ng claims his rotating vertical farming system could increase Singapore’s locally grown produce by a factor of seven. All while using only fraction of the land and water used in conventional agriculture, and about a quarter of the labor and materials. And then there’s the reduced carbon footprint of food that doesn’t require massive fossil fuel inputs.

But just as important—to his customers, at least—Ng says his greens taste better. And they do. We sat down together on the farm to a lunch of fresh picked bok choy, lettuce-wrapped pork, and yong tau foo soup with greens.

With some foreign produce taking weeks to reach Singapore’s shelves, Ng says that “day of” freshness is driving demand for his product.

“My customers keep on asking us, can you produce more, can you supply more?” Ng says.

Ng has raised 28-million dollars in public and private money to more than quadruple his capacity.

This one urban vertical farm won’t protect Singapore from a rise in climate-related disruptions to the global food supply, but it’s an investment that may well pay off—especially as the city adds an expected two million mouths to feed by 2030.