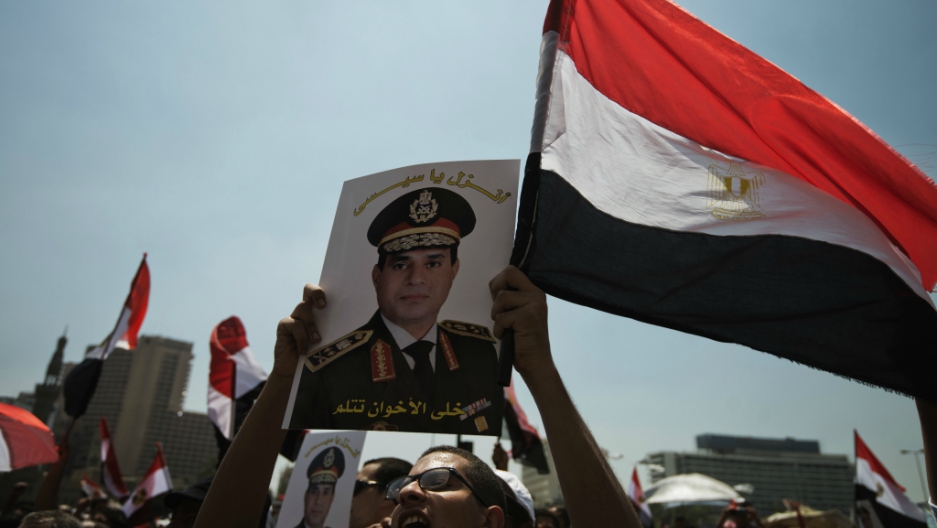 An Egyptian man holds a portrait of military chief General Abdel Fattah al-Sisi that reads in Arabic "Come down Sisi, let the Muslim Brotherhood stay silent." With its popularly supported overthrow of president Mohamed Morsi, Egypt's army has placed itself at the forefront of a difficult transition for Egypt.
Credit: GIANLUIGI GUERCIA
Share

CAIRO, Egypt — Less than a year after Egypt’s army formally left politics to usher in a new era of civilian rule, the military and its generals are again cementing their role as the nation's leaders.

Thousands answered an army appeal to rally in support of the military’s fight against “terrorism” Friday, cramming into Cairo’s Tahrir Square to wave Egyptian flags and cheer the army’s helicopter flyovers. Posters of the increasingly charismatic defense minister, Gen. Abdel Fattah al-Sisi, can now be found on street corners across Cairo, next to his tanks and soldiers.

It all started July 3 when Sisi and his fellow officers staged a dramatic coup d’etat against elected president and Muslim Brotherhood leader Mohamed Morsi, following record demonstrations against the Islamist leader on the anniversary of his botched year in power.

The armed forces presided over their own turbulent transition in the wake of Egypt’s 2011 revolt, when foreign reserves tumbled and they committed serious human rights violations, including sending 12,000 civilians to military courts.

But few in Tahrir Square seem to mind that the army, led by Sisi, so openly and so swiftly cancelled the democratic process, arresting and clamping down on Brotherhood leaders and their supporters.

Instead, a combination of Morsi’s incompetence and decades of state-led affection for the powerful military has comfortably trumped last year’s vote.

“The country needs to stand on its feet, and the only one who can [help the country] do that is General Sisi,” Mohammed Mahmoud, a pro-army protester in Tahrir, said Friday.

Amid the sea of Sisi posters surrounding Mahmoud in Tahrir were also pictures of the increasingly popular general imposed side-by-side with Gamal Abdel Nasser, Egypt’s most famous army colonel and later president.

Sisi called for the pro-military protests on the 61st anniversary of Nasser’s own coup against Egypt’s King Farouk on July 26, 1952, and which kicked off six decades of military rule.

For years Egyptians rarely saw the military’s soldiers or tanks, as the armed forces cultivated power and economic control but stayed out of the political limelight.

Decades of indoctrination — in schools, on national holidays and in the romanticization of questionable military victories — helped create the perception that Egypt’s troops are a strong but benevolent force that protects the nation’s borders and all Egyptians.

The army itself was able to produce this historical narrative, in part by blocking independent historians’ access to records. State-run media played its role, by showing glorified images of the army, paired with patriotic songs and programming about military feats.

Since the July coup, Egypt’s private and public television stations are increasing broadcasts of army propaganda videos and songs.

For these reasons and others, Egyptians welcomed the army tanks when they showed up in Tahrir Square during the initial uprising — and again in the wake of Morsi’s ouster.

According to a Gallup poll conducted in Jan. 2012 — when Tahrir Square was still the site of fervent anti-military protests — some 90 percent of Egyptians said they still had confidence in the military, and in the then-ruling Supreme Council of the Armed Forces (SCAF) specifically.

When army and police gunned down more than 50 Morsi supporters outside the military’s Republican Guard headquarters in Cairo July 8, many Egyptians insisted the protesters must have fired first.

“It’s not a surprise considering there has been six or seven decades of oppression by leaders coming from the military," said Omar Ashour, fellow at the Brookings Doha Center, a think tank.

On Friday, the crowd cheered as an army helicopter flew overhead. “The army and the people are one hand!” they chanted.

Diaa Faragal hoisted his three young girls onto an army tank at the entrance of the square, passing his oldest daughter a poster of Sisi and Nasser together.

“Sure, I want a democratically elected government,” Faragal said. “But as long as the army is fair and just, we will support them. I want the army to protect Egypt from violence.”

Faragal voted for Morsi in Egypt’s presidential elections last year. But he says Morsi’s interests were with his Muslim Brotherhood party, not Egyptians.

Like many here, Faragal’s loyalty quickly went back to the military.

“There is a physiological dimension,” said Ashour. “There is a strong man in the country with military fatigues and dark shades — and he’s issuing threats [against] his opponents … gaining hearts with fighter jets and coupons dropped from the sky.”

A general in a dark uniform waved from the helicopter to the Tahrir Square crowds thousands of feet below.

At the same time, clashes had kicked-off between pro-Morsi protesters and police near the Rabaa al-Adaweya mosque, where the Brotherhood is staging a mass sit-in in support of their ousted leader.

More than 70 Morsi supporters would eventually be killed, mostly from police-fired gunshots.

“They want us to fear the military, but we don’t fear anyone but God,” Ali Swaysy, a Morsi supporter, said from the Rabaa sit-in earlier on Friday.

He pointed up at an army helicopter circling the area.