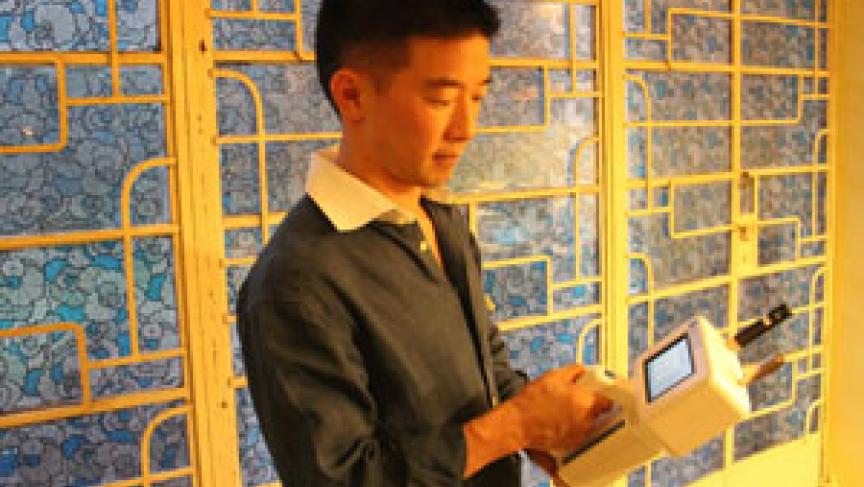 Louie Cheng peers at the meter on a bright orange, handheld monitor. With its long, pointy sensor it wouldn't look out of place in a sci-fi movie.

Cheng is the American owner of PureLiving China. It does pollution testing in homes, schools and businesses.

Companies offering ways to protect against pollution are seeing a big jump in business as people in China get more nervous about the air they breathe.

Smoggy skies have become a daily reality in urban China. Locals can check their TV or smartphones for daily readings on PM2.5 — tiny soot particles in the air.

Cheng says it wasn't like this when he launched his business.

“When we started three years ago, almost no Chinese local was concerned about the particle matter. You can say PM, you'll get the blank stare," Cheng recalled. “But PM2.5 has become part of every young person, old person, even children’s vocabulary because it’s everywhere. It’s in the media, it’s in the newspaper, it’s on social media in China. All of these are a huge reason why you have awareness.”

That awareness has put pressure on the government. It just launched a five-year anti-pollution initiative. Meantime, an entire industry has grown up in response to public health concerns. Sales of face masks, air and water purifiers are booming.

“It’s really the growing middle class buying these," said Kevin der Arslanian, an analyst with China Market Research Group. “These people are starting to see their income rise and they think it is a worthwhile investment, especially if they have children, which is the reason they like to spend a lot of money.”

Cheng is doing some testing at the home of Wing Chen. She was born in Hong Kong, raised in Maine, and came back to live in China nine years ago.

Wing Chen never used to think about pollution. But after giving birth to her son, she purchased what she calls “the Mercedes of air filters” for her son’s small bedroom. Now, she’s pregnant with her second child and she’s even more worried about air and water quality.

“Now it’s on my radar, it’s one of the top things I think about,” she said.

She says her friends in the U.S. can't relate. But her friends here talk about it all the time.

“We talk about what we're using,” she said. “Do you have a shower filter, you know, have you tested your air?”

After the testing, Cheng gives her detailed advice on her home’s air and water quality, and also chemical fumes from the furniture and a recurring mold problem.

Cheng doesn't have a background in environmental health. Some worry he’s playing on people’s fears. But there’s no one else here offering this kind of testing and advice.

He says people just want to have some control over their lives.

PureLiving is one of several companies here that sell high-quality air purifiers. They go for upwards of $500. Cheng complains that a lot of cheaper products are flooding the market, including on Taobao, China’s version of eBay.

Back at his office, Cheng says his staff has tripled in the past year. His clientele is expanding, too.

Before, most of his customers were expats. Now, he gets lots of requests to speak at schools and businesses.

And this year, he even did his first testing at a Chinese government office.