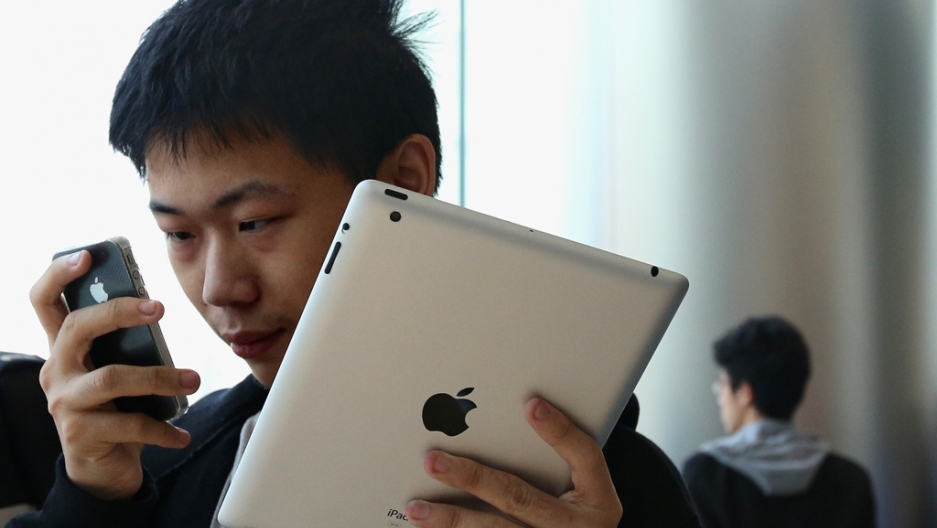 In Beijing's Wangfujing Apple Store, a Chinese customer looks at an iPhone 4S in one hand, with an iPad in other.
Credit: Feng Li
Share

Infractions included an average working week of between 66 hours and 69 hours, in excess of China’s 49-hour official limit, China Labor Watch said. Workers were forced to understate the amount of overtime they put in on forms.

The group’s report was based on interviews with 200 workers outside the factories.

If true, the allegations are bad news for Apple. Apple has been shifting work away from Foxconn, a supplier accused of numerous labor violations, to Pegratron, MarketWatch reported, and Pegatron has added 20,000 workers to its payroll since March. Now, analysts say, Pegatron’s Pudong district factory near downtown Shanghai manufactures one-third of the world’s iPhones and iPads.

More from GlobalPost: With the iPhone 5 come new accusations of Foxconn abuse

Yet, China Labor Watch executive director Li Qiang said, "Our investigations have shown that labor conditions at Pegatron factories are even worse than those at Foxconn factories."

The report includes "claims that are new to us," Carolyn Wu, a Beijing-based spokeswoman for Apple, told Bloomberg News in an interview Monday.

"We will investigate these new claims thoroughly, ensure that corrective actions are taken where needed and report any violations of our code of conduct," Wu said. "We will not tolerate deviations from our code."