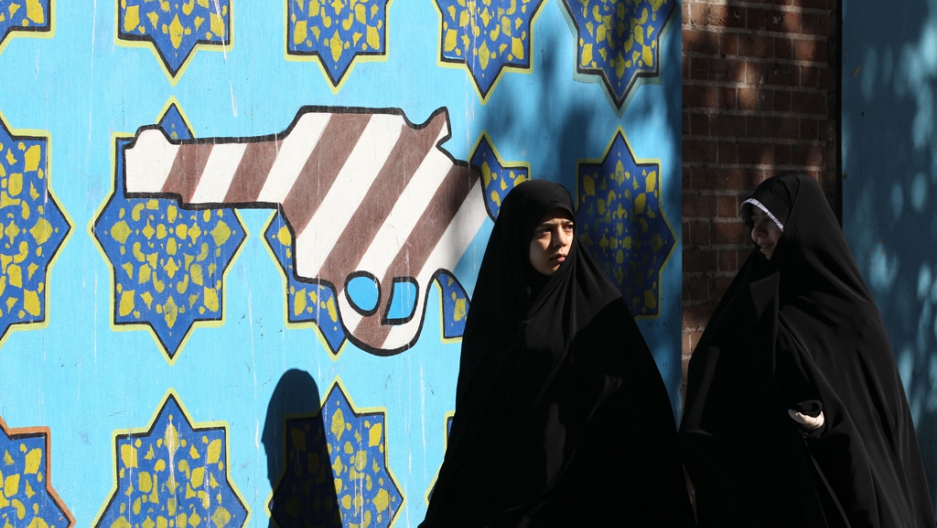 Iranian women walk past a mural of a revolver bearing the colours of the US national flag on the wall of the former US embassy in Tehran on November 2, 2012, during a rally to mark the 33rd anniversary of seizure of the US embassy which saw Islamist students hold 52 diplomats hostage for 444 days.
Credit: Atta Kenare
Share

TEHRAN — Hassan Rouhani spoke about the Algiers Accords in his first press conference as president elect, a reference that might puzzle most Americans. The Accords are a legally binding agreement quite famous in Iran and virtually unknown in the US.

In 1979 Iranian militants overran the US Embassy in Tehran and seized diplomatic hostages. As part of the hostage release in 1981, the US government negotiated with Iranian officials in Algiers, Algeria, and jointly issued the Accords in January 1981.

The Accords call for lifting US sanctions against Iran, returning seized Iranian government property being held by the US, and prohibited the hostages from suing Iran for damages.

The US also pledged that "it is now and will be the policy of the United States not to intervene, directly or indirectly, politically or militarily, in Iran's internal affairs."

That declaration of non-interference includes sanctions. US courts have consistently upheld the legality of the Algiers Accords.

Former hostages tried to sue the Iranian government in US courts, but the State Department intervened in the case, arguing such payments were prohibited under the Accords. A federal appeals court upheld the State Department position. The US Supreme Court refused to hear an appeal of the case.

So the Algiers Accords remain a judicially recognized international agreement upheld by the US government. Republican and Democratic administrations have taken the same position over the years regarding compensation for hostages.

Successive US governments have also ignored the provisions regarding non-intervention.