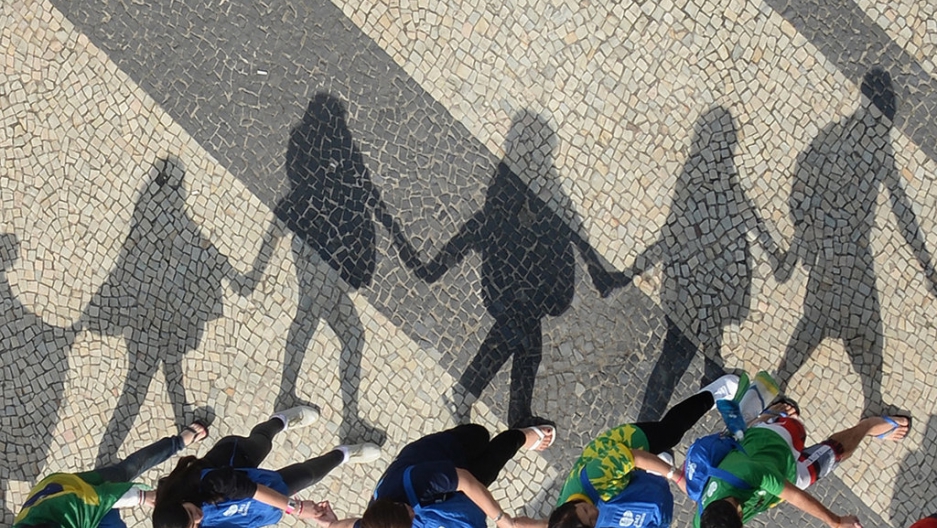 People walk along the beachfront as they leave Copacabana beach in Rio de Janeiro on July 28, 2013 at the end of the final mass of the visit of Pope Francis to Brazil. The pope announced that Krakow, Poland, the native land of late pope John Paul II, who started the World Youth Day tradition, will host the next gathering in 2016, prompting Polish pilgrims to jump up and down on the beach.
Credit: Tasso Marcelo
Share

RIO DE JANEIRO — When Pope Benedict said Mass in São Paulo during a trip to Brazil in 2007, towers of speakers carried his halting Portuguese across acres of empty green space at the Campo de Marte Airport.

Organizers had greatly overestimated the enthusiasm among local Catholics for Benedict, who drew lackluster crowds during his five-day visit, the echoing speakers at the airport seemingly symbolizing a church that had lost touch with its flock in the world's most populous Catholic country.

But six years later Brazil is falling in love with a new pontiff, the rapturous welcome given to Pope Francis since his arrival on Monday a stark contrast to the one received by his immediate predecessor and recalling the heady, emotional days of John Paul II’s first visit here in 1980.

Even the miserable winter conditions did not deter hundreds of thousands of worshipers standing for hours in the rain to listen to Francis say mass at the country’s national shrine in Aparecida on Wednesday, an encouraging sign for organizers of World Youth Day (in reality a week-long celebration) whose events in Rio de Janeiro are threatened by inclement weather.

Of course Pope Francis counts on some home field advantages denied Pope Benedict. His week-long trip to Brazil marks a debut visit to his home continent by Latin America’s first pontiff. An estimated 40,000 well-wishers from Argentina alone have travelled to see their fellow countryman. In Brazil, where informality is a deeply ingrained national character trait, his man-of-the-people style with its impromptu contact with crowds also compares favorably to the cerebral aloofness of Benedict.

This reception will be greeted with relief within the church, which has been hemorrhaging followers to evangelical Protestant churches across Latin America in recent decades, and whose election of a leader from the continent indicated a resolve to tackle the Pentecostal challenge in a region that is home to around 42 percent of the world’s Catholics.

“A papal visit to a country is an amazing opportunity to connect with the Catholic masses and that is an urgent task Catholic leaders face in Latin America,” says Julia Young, a Latin American historian at the Catholic University of America. “The region is home to the bulk of the world’s Catholics and the question is how to keep them Catholic because they are becoming evangelicals and Pentecostals at a really rapid rate.”

How Francis plans to confront the challenge of these homegrown Pentecostals and other evangelical churches could become clearer over the next few days as he gives a series of homilies and addresses.

He gave an early indication on Wednesday when he praised the document produced by the Latin American Episcopal Conference held in Aparecida in 2007, calling it "a great moment in the life of the church."

As Cardinal Bergoglio, Francis was one of the text’s main authors, calling for an evangelizing church devoted to missionary work which seeks out the faithful. In doing so he was drawing on his experience as cardinal when he was faced with losing many of his flock to evangelical pastors increasingly active in the slums of Buenos Aires.

His response was to refocus the church’s efforts on the region’s poor by pushing his priests from their comfortable middle class parishes to greater efforts in the slums. His personal contact with Argentina’s grim ‘villas miserias’ – Spanish for miserable neighborhoods – has turned him into a stern critic of the excesses of global capitalism and what he sees as a disposable consumer culture that ignores the misery of the world’s poor.

This message also has the advantage of drawing attention away from the debate on the church’s doctrines on sexual morality which has proved so decisive in the US and Europe. The new emphasis has even raised hopes among the Latin American church’s progressive wing that Pope Francis could initiate wider reform in the global church.

“There is a great hope that Pope Francis will start a debate in the church about sexual morality, frozen since the 16th century and which not even the Second Vatican Council tackled,” says Frei Betto, a progressive Brazilian theologian. “The pope will have to disappoint young people if he insists on not using contraception, banning access to the sacraments for separated couples and impeding women from becoming priests.”

But many are skeptical of Francis’ ability to meet such expectations among liberals.

“We have to remember he is the Catholic Pope elected by the cardinals and unless he really has some real tricks up his sleeves he is not going to turn change course dramatically. His record is pretty clear on the big social questions of marriage and family and contraception,” notes historian Young.

Such social traditionalism also chimes with the fastest growing segment within the Latin American church — the charismatic Catholic movement. This borrows heavily from the emotional religious practices of its evangelical rivals, shares its emphasis on the individual’s relationship with the Holy Spirit and is similarly viewed as being inclined to social conservatism.

“The Latin American Christian landscape is ‘Pentecostalised’ to the extent that if you don’t offer Pentecostal-style worship you will not prosper,” says Andrew Chesnut, the Bishop Walter F. Sullivan Chair in Catholic Studies at the Virginia Commonwealth University, who notes many charismatic Catholics have been influenced not just by evangelical ritual but also the deeply capitalist ‘prosperity theology’ rampant in Pentecostalism.

Evidence of the charismatics’ growing influence in Latin America’s church can be seen in another notable change from Benedict’s visit in 2007 — the prominence afforded to leading figures identified with Brazil’s charismatic Catholic movement at this week’s events in Rio.

“The charismatics are essentially carrying the Church in Brazil and Pope Francis really needs to be concerned with the concerns of Catholics in Latin America, Africa and Asia because that is where 70 percent of Catholics reside,” observes Chesnut.

The next few days in Rio are likely to further illuminate how Pope Francis plans to balance his stern criticisms of capitalism with leadership of a flock increasingly influenced by the highly individualistic ‘prosperity theology’ of his evangelical rivals.