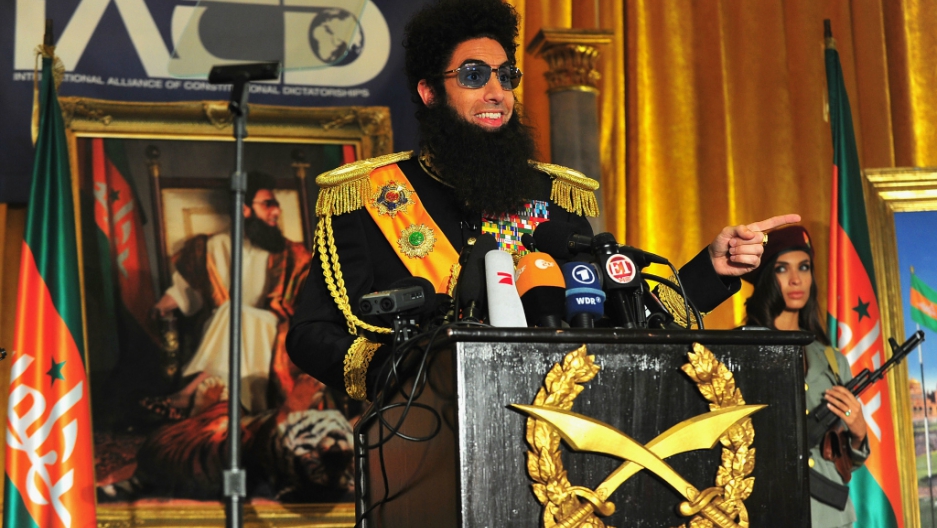 Sacha Baron Cohen as 'The Dictator' holds a press conference at The Waldorf-Astoria on May 7, 2012 in New York City.
Credit: Theo Wargo
Share

As if they have something to hide, authoritarian leaders have a habit of wearing sunglasses when facing the public. More often than not, a leader wearing sunglasses is a worrying sign. There are endless examples of bespectacled autocrats doing their dictatorial (and sartorial) best with their stunna’ shades on.

As a public service, we've rounded up a few classic examples. You're welcome.

When Egyptian Defense Minister Gen. Abdel Fattah al-Sissi delivered his speech in Cairo, Egypt on July 24, he was wearing sunglasses. He then called for new protests and for the Egyptian people to give the military a mandate to fight "terrorism." Giving unchecked power to governments to combat terrorism rarely end well.

When Egypt's former president, Hosni Mubarak, went on trial earlier this year for charges of murdering peaceful demonstrators, he was wearing sunglasses. Mubarak was found guility and given life in prison for complicity in the killing of protesters at the height of the 2011 anti-government protests.

When General Manuel Noriega, leader of the Panamanian Defence Forces, waved to reporters on Aug. 31, 1989, he was wearing sunglasses. Three years later he would be tried on eight counts of drug trafficking, racketeering, and money laundering.

When Ahmadou Ahidjo (L), president of Cameroon, was welcomed by Josip Broz Tito (R), president of Yougoslavia, in June 1967, they both were wearing sunglasses. Ahidjo ruled Cameroon for 22 years and, after first resigning for suspected health reasons, attempted two violent coups in his attempts to return to power. Tito, for his part, led Yugoslavia from 1945 to his death in 1980.

When Libyan leader Muammar Gaddaf delivered a speech behind bullet-proof glass to mark the birth of Islam's Prophet Mohammed in the coastal city of Benghazi on Feb. 25, 2010, he was wearing sunglasses. Less than a year later, Gaddafi would be killed after attempting to brutally put down a national uprising.

When Russian Prime Minister Vladimir Putin watched an air show on Aug. 17, 2011, he was wearing sunglasses. Putin faces accusations of running an increasingly authoritarian regime. Earlier this year, Putin changed the rules so he could stay in power.

When Syrian President Bashar al-Assad marched behind the coffin of his father, former Syrian President Hafez al-Assad, during his funeral in Damascus on June 13, 2000, he was wearing sunglasses. Ten years later Assad responded to peaceful protesters calling for democratic reform with brutal force, leading the country into a vicious civil war.

When North Korean leader Kim Jong Il inspected this observation post on an unidentified island in North Korea, he was wearing sunglasses. Perhaps one of the most iconic shades-wearing dictators in history, Kim Jong Il left a legacy of desperate food shortages and hundreds of thousands of political prisoners to his son, Kim Jong Un, who took control after his death in 2011.

When Chile's former dictator, General Augusto Pinochet, participated in a rally in front of his home to commemorate the Sept. 11, 1973 military coup that brough him to power, he was wearing sunglasses. Supported by the United States, Pinochet's authoritarian rule lasted until 1990. He remained in control of the armed forces until 1998, when he was finally detained in London.

When Spanish head of state General Francisco Franco (L) greeted a crowd in Madrid in October 1975, he was wearing sunglasses. The leader of Spain’s nationalist faction during the Spanish Civil War, Franco was a brutal and authoritarian leader who remained in power until his death in 1975.

When Sudanese President Omar al-Bashir addressed a rally by thousands of Sudanese soldiers in the capital Khartoum on March 16, 2009, he was wearing sunglasses. Bashir is the first sitting head of state to be indicted by the International Criminal Court. He is accused of committing genocide in Darfur during the Second Sudanese Civil War.

When Cuban President Fidel Castro spoke to the media in Havana on Nov. 16, 1999, he was wearing sunglasses. Castro resigned as president in 2008 due to health reasons, paving the way for much-needed economic reforms.

When Iranian President Mahmoud Ahmadinejad delivered a speech during the 33rd anniversary of the Islamic Revolution in Tehran on Feb. 11, 2012, he was wearing sunglasses. Ahmadinejad, whose two-term presidency ends in August, has controversially denied the holocaust and advocated for Iran's right to be a nuclear state.

When Darth Vader stands with his storm troopers, he wears sunglasses. Vader attempted to create the Death Star, a planet to kill other planets, and eliminate the Rebel Alliance. He was revealed by his son, Luke Skywalker, to be the deformed Anakin Skywalker. Luke then killed him. The galaxy is safer now.