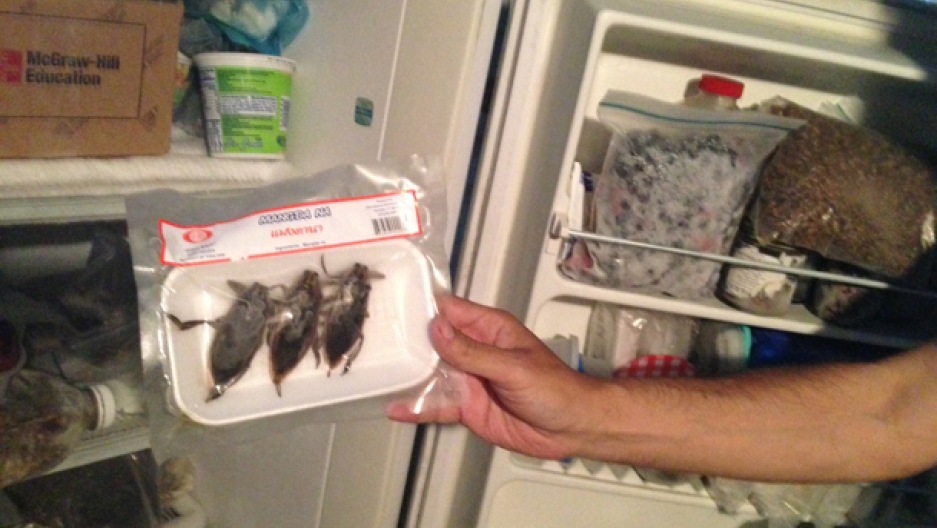 Dave Gracer shows off a package of frozen waterbugs from Thailand. (Photo courtesy of Emmett FitzGerald.)

Insects are viable food options, says a recent report from the United Nations' Food and Agriculture Organization, and with the world population estimated to reach 9 billion people by 2050, some are suggesting bugs as a real solution to a serious problem.

"From my point of view, the way that humans feed themselves now, basically, represents a big middle finger to the natural world," Gracer said. "Look at the future, look at what's coming our way. It's really kind of terrifying."

For now, Small Stock Foods is a modest business. Gracer said he fills an average of ten orders a year, mostly filled by avant-garde restaurants, novelty party planners and clients looking to add shock value to their meals.

Though the conception of eating insects in the United States may been previously stuck on gross-out reality shows like Fear Factor, Gracer said some are coming around to the idea of bugs as a source of food in the future. "There are companies now working to produce industrial commercial supplies of insects for human consumption in the U.S. and that is of the last 18 months," he said.

Gracer estimates he has eaten some 60 species of arthropods, as well as scorpions, a giant centipede, and roly-polies — which he says are "quite good."

"They're animals you know, they would prefer to avoid dismemberment or death just like you and me," he said.

"I am reacting to these insects the way any other predator would," Gracer said. "It’s an honest exchange of energies like you know what, if I can get you, I will."