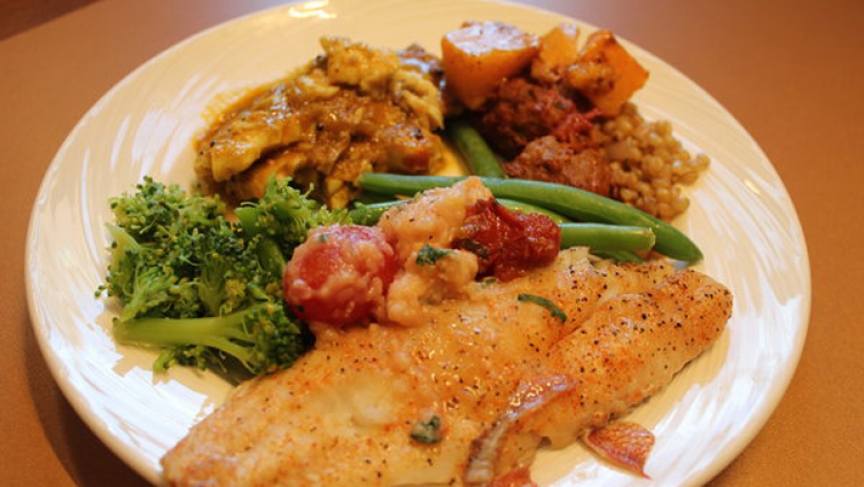 Bon Appétit's low-carbon food plan calls for putting vegetables at the center of the plate. Making the plate smaller cuts down on waste.

Food service companies serve millions of meals a day in the US in a process that's largely industrialized, carbon-intensive and extremely wasteful. The company Bon Appétit, which serves 145 million meals a year, hopes to revolutionize the industry by changing what they serve, how they serve it and where they get it.

For those of us who grew up standing in line for all-purpose patties and reheated frozen whatever, it can be hard to imagine institutional cafeterias leading a revolution in responsible eating. But that's what Helene York sees when she looks at her plate.

"First of all, the center of the plate, literally, are green beans," York says, sitting in a dining hall at MIT in Cambridge, Massachusetts. "I have very little carbs, and I have modest amounts of protein. I've got a lot of vegetables."

On the edge of her plate is a small filet of redfish, caught by a local fisherman. She calls it "a delicious topping."

York works for Bon Appétit, a California-based food service company that runs about 400 kitchens around the country, at colleges and universities, and at companies like eBay, Amazon and Twitter.

York calls herself an "internal activist." She recently stepped down as Director of Strategic Purchasing, where her job was to put sustainability at the center of Bon Appétit's business model. For the last few months, she's been on loan to Google. She's here in Massachusetts to make her pitch to chefs at the company's Cambridge office.

In a big, bright seminar room, York explains to a half dozen chefs how the food system contributes to climate change, and how climate change is altering the food system. For instance, cows, and fertilizer for animal feed, emit huge amounts of powerful greenhouse gases. Plus, she says, 40 percent of the food we produce is never eaten, meaning all those emissions are for nothing.

"So what can we do as chefs and food service providers?" she asks the assembled chefs.

"Number one, I think, within all of our power, is a radical reduction in food waste."

By not buying too much, by using more of what they do buy, and by composting scraps, York says Bon Appétit chefs around the country have already cut the equivalent of 5 million pounds of carbon dioxide every month. That's like not driving more than 6 million miles.

The second priority, she says, is reducing the use of meat and dairy products.

"This is where it gets, let's say, creative," York says.

She says company chefs are making meat portions smaller, but tastier and more interesting. And they're doing more with vegetables and grains. The idea isn't just to lower the climate impact of a given meal. It's also to change the way millions of us think about the way we eat.

York says the message can go up the ladder, too.

"Over time I've come to realize that, working for a larger company, I have some power to influence the supply chain," she says.

Like by helping huge meat and chicken and grain companies find ways to reduce their emissions.

"The goal here is long-term, balanced food system sustainability," York says. "If the contract restaurant companies work with the big protein producers, the big cereal manufacturers, to make improvements, that will benefit everybody."

Still, a big part of Bon Appétit's low-carbon food plan involves buying from smaller local and regional suppliers. They're generally the best source for fresh food, and they help fortify local economies against the risks of climate change.

But it can take some extra effort.

York drops in on Jared Auerbach, owner of Red's Best Seafood, on the Boston Fish Pier. He's the guy who supplied the fish at MIT.

Auerbach has created a high tech system for buying and marketing fresh local seafood. His goal is to help the little guys compete with the big factory ships. But to get the best price, he often ends up flying his product to high-end restaurants around the world.

"We ship tunas to Japan," Auerbach says. "It's like, the worst thing ever. But they're willing to pay! And at the end of the day, my job is to sustain local fishermen."

Ideally, Auerbach says, he would like local customers who will buy a lot at once at a fair price and take what's in season. That's why he was so excited when York came along.

"We started out five, six years ago with the hope that six years later there would be people like Helen," Auerbach says. "We set out with a mission to be able to fulfill this demand that we thought was necessary, and we believed would come, and now it's here. On a large scale. Major universities, major hospitals, stepping up to the plate."

York says it will be a while before climate-conscious cooking finds its way from the MITs and Googles of the world into the mainstream. But more food service companies are embracing the idea, to which York says: bring it on. After all, we all eat from the same planet.

"This is going to be a long-term change," York says. "It's a culinary change, it's a generational change. But if we keep on with this effort, I think we're going to get there.

"What's for Lunch" is the latest chapter in "Food for 9 Billion," a two-year project spearheaded by Homelands Productions and the Center for Investigative Reporting, and broadcast partners PBS NewsHour and American Public Media's Marketplace.