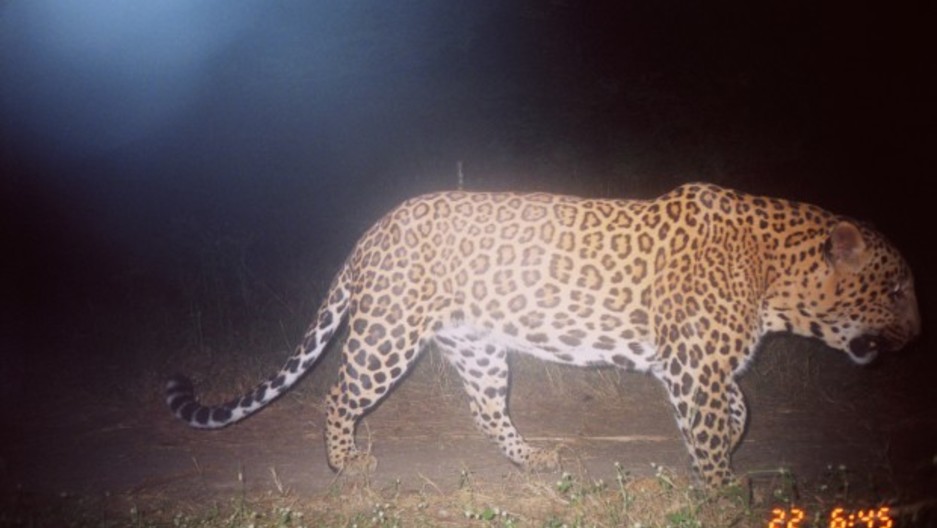 A leopard captured in one of the camera traps as it walked along a village road outside Mumbai.

A recent study of an agricultural area outside of Mumbai found the highest concentration ever of large carnivores living alongside people. The relationship can be tense and occasionally deadly, but a leopard researcher has found that the two species have largely adapted to sharing the landscape.

When I told people in Belha village in western India that I was doing a story on leopards, they brought me to an unpainted gray house, next to dense sugarcane fields. My guide pointed me to one of the two children playing outside, a four-year old girl.

"Here she is," the guide says. "It caught her. It was holding her with its teeth here in the neck."

The little girl was shy and just gave her name: Samruddhi Ramdas Matale

One evening last fall, Samruddhi was playing in her backyard when a leopard emerged from a cane field, grabbed her from behind and dragged her away. Her father heard her screams and chased the cat with his sickle.

"The leopard abandoned her as soon as her father showed up," says Samruddhi's mother, Vaishali. "Blood started pouring out of her neck, and it was dripping when we carried her to the hospital."

It took seven days of intensive care, but the girl survived. Four fingernail-sized scars in her neck and head are the only reminders of that awful night.

Those and the cat itself, which is still at large.

"Its not just one," says Vaishali Matale. "There are a few of them roaming around in this area. When my child was attacked, others saw an animal on the other side of the village. And there are cubs too."

In fact, the area is home to a thriving leopard population. They live in and around the sugarcane plantations that dominate the landscape here, taking cover in the dense cane thickets alongside farms and villages.

And not only leopards, says Vidya Athreya, one of India's best-known leopard ecologists, but also wolves, jackals and hyenas.

A few years ago, Athreya and her team installed 40 movement-triggered cameras around this part of Maharashtra state, east of Mumbai. They were surprised by what they saw in the pictures: leopards were hanging out in people's backyards pretty much every day.

The results were published earlier this year in the journal PLoS One. The study shows a density of large adult carnivores that it says was "never before reported in a human dominated landscape."

But just as surprising, Athreya says, is that attacks like the one on the little girl are very rare.

"These animals can live, even among high density of humans without attacking humans the way we expect them to attack," she says.

Athreya says the leopards and other carnivores have adapted to living alongside people, subsisting mostly on stray dogs and cats, and the occasional goat or calf.

And it's a two-way street, she says — people also seem to have adapted to living with leopards.

"Yes they're scared of it," Athreya says. "Yes they have losses. But it seems to be, they also accept it as part of their landscape."

That's very different from many other parts of the world, where people often kill carnivores that so much as threaten their livestock, let alone humans. For instance, in Africa, entire prides of lions are sometimes poisoned just to protect goats and cows. And Ranchers in the US shoot wolves that attack their cattle or sheep.

Athreya says the difference in India may partly come down to the Hindu principles of tolerance and non-violence.

"A lot of our traditional scriptures and the way of living life, also tells you to live and let live,'' she says.

But "to live and let live" with carnivores here doesn't mean being care-free. It means understanding the leopard's behavior.

Belha village cane farmer Bhaskar Nivrutti Auti says the most important thing is to be cautious all the time, and not venture out alone after dark.

"The leopard spends most of the day sitting inside the sugarcane," Auti says. "And at night it goes out. It is usually near people's houses, and also comes near the cattle and goat sheds."

When leopards do attack, there is a lot of anger, protests, and demands for immediate action, which often comes down to capturing the culprit and releasing it in a less populated area.

Still, there are some animals that require a permanent solution.

At a plant nursery surrounded by agricultural fields, there's a distinct odor of a cat, and a low, menacing growl, coming from a female leopard sitting in a small green cage. As the ecologist Vidya Athreya approaches, the animal leaps toward her, slamming against the bars with a ferocious roar. It's shockingly loud and fierce. Athreya tries to calm the animal with a soft "shh-shh-shh."

This leopard is thought to have attacked and killed a three-year old girl as she slept with her family in a nearby field. The animal was trapped the next day, and Athreya says there was human DNA in her scat.

"She is very likely to be the killer," Athreya says, "and in that case you can't leave her again. Where will you leave her?"

Suspected man-eaters can be shot if they're on the loose, but more often they're trapped. And under India's strong wildlife laws, once they're in captivity, they can't be killed.

Instead, this leopard will most likely spend the rest of its life in a cage.