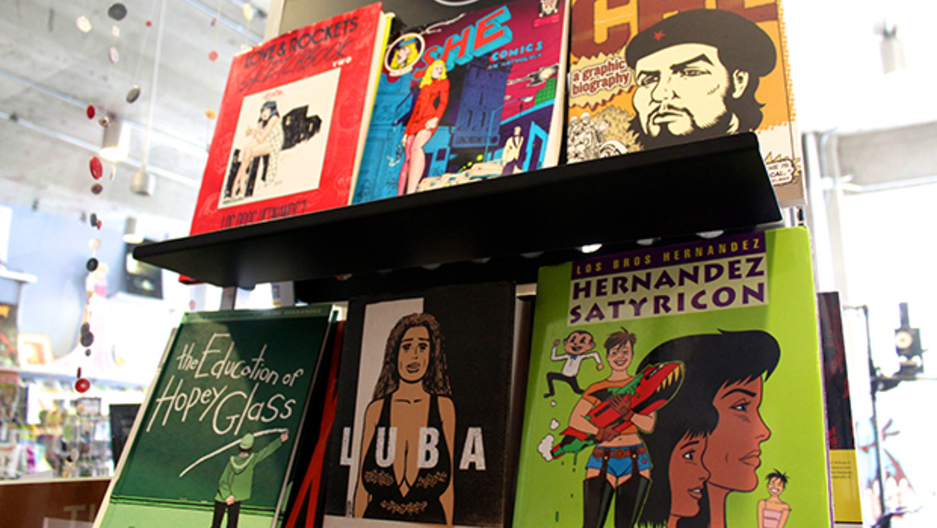 You may know about Comic-Con, the massive comic convention in San Diego. But there's another world out there, filled with characters created by Latino artists. And it's a group that's coming more into its own, to the extent that conferences dedicated just to their work are happening in California. The World's Monica Campbell reports on the artists and their creations.

Growing up in Los Angeles, Javier Hernandez worshiped superheroes like any other kid. But he went a bit further.

"When I was a kid my brother gave me his collection of comics, and I started just drawing," he says. "And then at one point, after college, I go you know I've got to make my own comic. You know, I want to see stuff that maybe you don't see a lot."

Like characters called Weapon Tex-Mex, El Muerto or Sonámbulo, a Mexican wrestler turned private eye. One of Hernandez's latest comics teams up a young Aztec boy and a dinosaur.

"It's basically about a boy who during the Spanish conquest of Mexico realizes there's a Tyrannosaurus Rex embedded in a block of amber in a cave," Hernandez says. So, the T-Rex gets released and the boy rides him to battle the conquistadors.

"Of course we know how the story ends unfortunately," says Hernandez.

The comic can get bloody, but it is also offbeat "because I grew up watching The Addams Family on TV," Hernandez says. "You know, it's not horrific, but it's quirky and odd and kind of dark and macabre."

I met Hernandez at San Francisco's Cartoon Museum for the Latino Comics Expo. It is the third time he has co-organized this event and it's still pretty new, but the number of fans and Latino creators is growing—enough for another event like this in Southern California next month.

People of all ages stream in to see the cartoonists' work, including Ben. He is 11-years-old and Mexican American. "It's pretty cool," he says. "A lot of the comic books I read, they are never really Mexican superheros. They're usually, like, white, black or Asian."

Cartoonist José Cabrera noticed that gap too. He is from New York, but his parents are from the Dominican Republic. The absence of Latinocomic characters struck him as a kid early on. So, he started developing his own characters. One of his early comics is called "Crying Macho Man," and it became an underground hit. Now, Cabreraa has put it on hold while he taps other cultures.

"I'm exploring a lot of the mythology of Latino art and Japanese art, Asian art," he says.

I ask Cabrera and another artist here, Jim Lujan, who is their inspiration. At once, they both said, "Sergio Aragonés!" The veteran Mad Magazine illustrator, who was born in Spain but grew up in Mexico, is known for his quick style and for the cartoons that appeared in the magazine's margins for years.

"His art style is just flawless," says Cabrera, who now lives in Los Angeles. "He draws so fast and it's so accurate and so fun."

But some artists here go beyond superheroes. Illustrator and writer Liz Mayorga, 31, drew as a kid growing up in Los Angeles and then saw art as a way to connect to her Mexican roots. One of her newest stories is called "A Caxcan Guerrilla Takes Over the Awkward Girl."

"Caxcan is a tribe of indigenous people that were in my mom and dad's hometown of El Teul, Zacatecas," Mayorga says. "I always asked my parents about our indigenous background and they could never give me any answers. And it made me really angry to know that my parents had no concept of that."

One of her favorite cartoonists, Mario Hernandez, is also here and he stops by Mayorga's table. Hernandez and his brothers pioneered the comic "Love and Rockets." The cult favorite broke ground in the early 80s with its smart Latino characters, steeped in California's punk rock scene.

"The stories would just tell stories about everyday people who happened to be gay, or happened to be Hispanic or they happened black," says Hernandez. "At the time there was no other Hispanic names that were putting out original things like that."

Then the two artists talk technique.

"Mario's style in cartooning specifically, he does a lot of really heavy lines," says Mayorga. "And they just seem so well mastered, just, you know, a little brushstroke and it's there."

"That's hard to do, to make things like you just whipped it off with a whim," says Hernadnez. "But I'm sweating bullets doing that kind of thing, to make it look just knocked off.

After a bit, Hernandez leaves and Mayorga pulls out her sketchpad. She's swept away, filling it with fine black lines and new worlds.