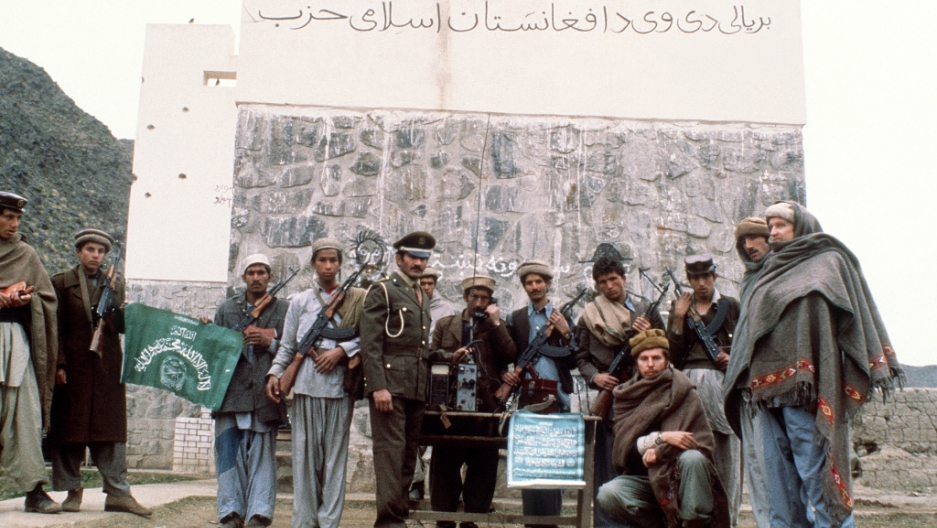 Afghan anti-Soviet resistance fighters of the biggest political party of Afghanistan Hizbi Islam stand in front of their fort in the mountainous Khunar area near Pakistani border in Afghanistan on February 28, 1980. The Afghans repulsed the then Red Army 1979-1989 invasion with a huge human cost and with the material aid of the western wolrd, above all, the United States. Easy estimates say that around one and half million Afghans were killed in their fight against the Soviet soldiers. (Photo credit should read /AFP/Getty Images)
Credit: AFP
Share

With the United States poised to begin what could be a long and expensive intervention in Syria’s bloody civil war, it might be a good time to examine past military involvements in which US money and weapons contributed to some less-than-stellar results. As Gen. Martin Dempsey, chairman of the Joint Chiefs of Staff, warned on Monday, beware of "unintended consequences."

Afghan anti-Soviet resistance fighters in the eastern part of Afghanistan in the early 1980s. AFP/Getty Images

No, the United States did not create Osama bin Laden, nor did US money and weapons arm the Taliban directly. But Washington did pour some $2 billion into Afghanistan in the 1980s, with the goal of making life uncomfortable for the Soviet Army. Moscow had invaded Afghanistan in 1979, in what it claimed was a necessary intervention to tamp down Islamist opposition to the Communist government, and to keep religious fundamentalism from spilling across its own borders into Central Asia.

US money and weapons flowed to rebel groups loosely united in what the United States and its allies called “the Northern Alliance.” This included Hezb-e-Islami, headed by the fiercely anti-American commander Gulbuddin Hekmatyar, who is now battling the Kabul government and, by extension, the US forces.

The movement of fundamentalist religious students that became known as the Taliban arose in Kandahar in the 1990s, after the Soviet forces had pulled out and US assistance had dried up.

But the conditions that made it possible for the Taliban to sweep into power in 1996, many argue, were closely tied to US actions. The mujahedeen fighters, who were armed and funded by Washington to resist the Soviets, were abandoned in short order once Gen. Boris Gromov walked across the Friendship Bridge back into Soviet Uzbekistan in February 1989.

The Afghan mujahedeen then went on a rampage, tearing the country apart and making ordinary Afghans long for any force that would re-establish order. Enter the Taliban.

This could be a cautionary tale for Washington as it plans its final withdrawal from Afghanistan next year.

Residents and Sandinista fighters in November 1983 at the southern Nicaraguan town of Cardenas. UPI Archives/AFP/Getty Images

The United States has been led down some pretty shady byways by the simple principle of anti-communism. As in Afghanistan, it seemed to matter little who ended up receiving American largesse, provided they were resisting the spread of left-wing ideology or the creation of socialist governments.

When the left-wing Sandinistas overthrew the regime of Anastasio Somoza in Nicaragua in 1979, panic swept through Washington. The last thing America wanted was another Cuba in its backyard.

As the Sandinista government embarked on dangerous policies of mass literacy, promotion of health care, and gender equality, the United States was busy backing a group of rebels whose designated aim was to overthrow the Sandinistas. The Contras — shorthand for the Spanish word for counter-revolutionary — arose in 1981, funded and armed by a fiercely anti-communist administration in Washington. Ronald Reagan called the Contras “the moral equivalent of our Founding Fathers,” and would let nothing get in the way of aiding them.

Many tried: A Democratic Congress passed the Boland Amendments, which prohibited US assistance in training, equipping or advising the Contras.

In response, the Regan administration embarked on the Iran-Contra affair, by which funds from illegal arms sales to Iran were diverted to funnel illegal aid to the Nicaraguan rebels. The scandal erupted in 1986, and the ensuing hearings cast a long shadow over the Reagan White House.

The International Court of Justice ruled against the United States in a case brought by Nicaragua, finding that Washington had violated international law by supporting the Contras and ordering it to pay reparations to Nicaragua. The United States used its veto power in the United Nations to block enforcement of the judgment, and thus escaped paying compensation.

The Sandinistas are back in control in Managua, and there is some evidence the Contras are regrouping, stirring fears of renewed conflict.

The debate over US intervention in Iraq will doubtless continue for decades to come.

So what, if anything, did the United States accomplish in its eight years in Iraq, at a cost of more than $2 trillion, the deaths of more than 4,000 US soldiers and more than 120,000 Iraqi civilians?

Well, say many, the United States was the main force behind the Anbar Awakening, which gave rise to the Sons of Iraq. These predominantly Sunni armed militias battled Al Qaeda, helped improve security, and even saved American taxpayers some cash.

But where are those freedom fighters now? As early as 2010, there were fears that some of the Sons of Iraq were defecting to Al Qaeda, which was offering them more money.

Al Qaeda in Iraq is responsible for a new surge in violence, including the recent attack on Abu Ghraib prison that freed up to 500 militants.

It is also sending money and fighters to Syria, to help battle against President Bashar al-Assad's military forces. In fact, there are some contradictory and confusing claims that Syria’s Jabhat al-Nusra front has supposedly merged with Al Qaeda in Iraq.

So, if anyone can unravel the complex web of ties that unite Syria’s rebels and regional players, the United States may now be assisting some of the same fighters it was backing in Iraq before they joined up with Washington’s sworn enemy, Al Qaeda, which is now making common cause with the groups that will be the likely recipients of US aid.