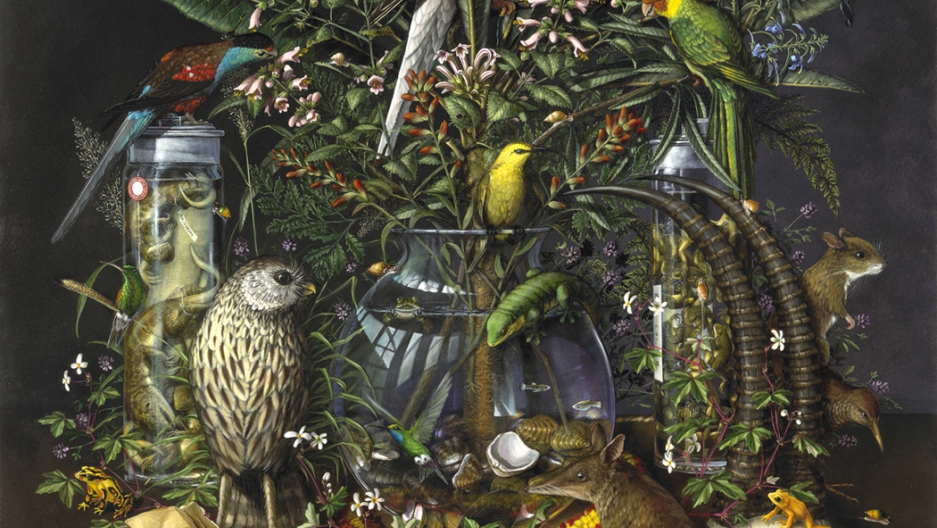 Bringing extinct animals back from extinction has usually been left to the world of science fiction. But a group of biologists is attempting it in the real world.

The organization Revive & Restore, a project of the Long Now Foundation, a few months ago held a day-long TEDx conference on de-extinction at the National Geographic Society. This is not quack science; some of the research involves contributions from hallmarks of academia including Harvard University, University of California Santa Cruz and Wake Forest University, among other institutions.

Painter Isabella Kirkland, who is also a research associate at the California Academy of Sciences, opened the event with an image of her painting Gone. It looks like a Dutch master’s oil painting, depicting 63 extinct New World species arrayed on a table elegantly: the Carolina parakeet, the golden toad, and in the central place of honor, Martha, the last passenger pigeon, who died in 1914.

The passenger pigeon is the preoccupation of Revive & Restore’s Ben Novak, a genetic biologist.

“It’s my job to bring the bird back to life,” he said.

Novak began thinking about resurrecting animals in junior high school, when he did a science fair project on the dodo bird.

“It’s the icon of extinction — ‘dead as a dodo,’ as they say — and I learned that the dodo is actually a giant extinct pigeon," he added. "It gave me the pigeon bug.”

The techniques are complicated and untried, but de-extinction is simple in concept: take DNA from a dead sample in a natural history museum somewhere, and plant it in the egg of a living relative — in this case, the band-tailed pigeon. If it works, the living bird will hatch an egg out of which will come the clone of a long-dead bird.

But many scientists are skeptical of or opposed to this so-called Great Comeback. David Ehrenfeld, a conservation biologist at Rutgers University, points out that bringing back a few examples of a species won’t have much of an effect on the diversity of our ecosystem — especially a species that lived in massive flocks like the passenger pigeon.

Meanwhile, resources will be directed to a flashy, high-tech project, as conservationists count the living species dying off year after year.

If the de-extinction of the passenger pigeon works, and the species is somehow reintroduced into the wild, perhaps Isabella Kirkland will retouch her painting Gone, substituting some other photogenic animal in pride of place. Perhaps the critically endangered Sumatran rhino?

There are, and will continue to be, a wealth of candidates.