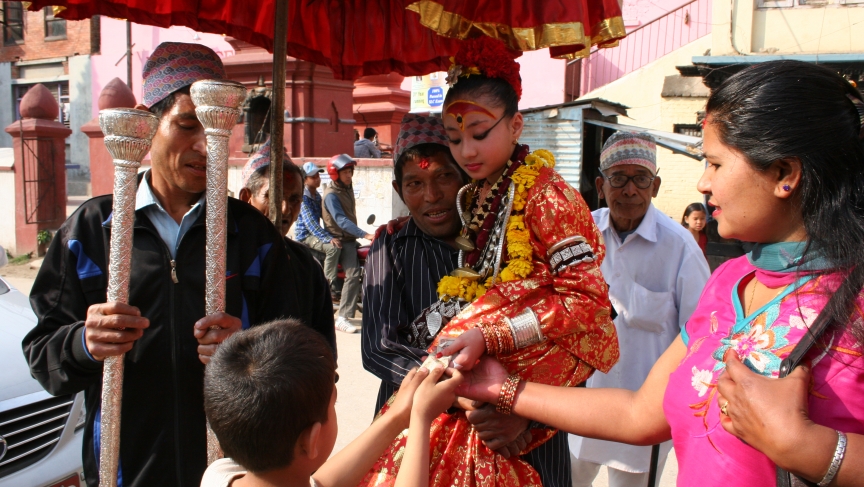 Locals of all ages come out of their homes to pay respects and get a blessing from the Living Goddess. Her mother Shobha stands to her right.

Last year, during my visit to Nepal, I dropped by the home of a Living Goddess, called a Kumari Devi. The Kumari's attendants and family were preparing to carry her through the town to a local festival, and she was dressed in elaborate makeup and colorful silk clothes. The elders soon whisked her away to the festival, and I followed.

I saw locals, young and old, come out of their homes to seek blessings from this 10-year-old child, believed to be a reincarnation of the Hindu Goddess Durga. She blessed them all by dabbing a large dot of red powder on their foreheads. Through it all, she didn't say a word.

I wondered more about her life, so I returned to the Kumari's house a few days later. Her mother, Shobha, welcomed me in and sat down for an interview.

We chatted in Hindi as she told me about how difficult life was for her daughter, Samita. She told me how, everyday, streams of people come into their home to worship her. She's not allowed to go to school or even play outside, but has a select few friends who can come over to play.

Even though it's incredibly prestigious to be chosen, the Living Goddess lives a life of seclusion during her childhood years.

I'm leaving for Nepal this week, and hoping to meet Samita's family again. I'm planning to find out more about what life is like for a Living Goddess, and also for a former Kumari who has returned to her mortal status. Join me on my journey by following me on Twitter and Instagram.

Editor's note: Sonia Narang will be reporting in Nepal with support from the International Center for Journalists.