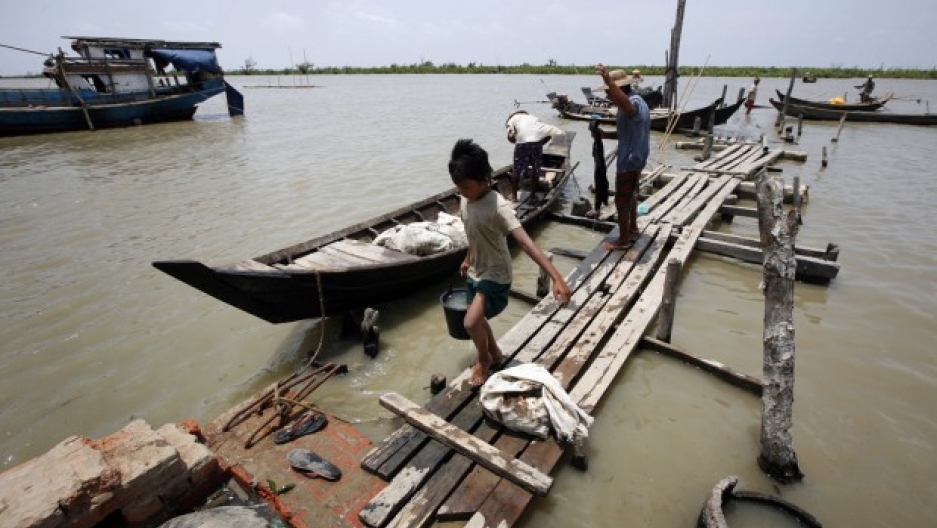 A boy carries supplies off a small wharf along the Pyanmalot River in Pyinsalu Township located in Myanmar's delta region (Photo by Soe Zeya Tun/Reuters.)

You can smell the ocean at Tha Khin Ma Gyi.

It’s about five miles from the Andaman Sea, making it great for fishing, but also making it vulnerable.

Before Cyclone Nargis, it was home to about 700 people. After the storm, the survivors from the village gathered and counted. There were 72 of them left.

U Hla Kyi was one. On the night of Nargis, a wave swept him toward the river.

“I’m in the water and trying to swim and grasp whatever I can,” he said. “Near the riverbank there’s one tree, and then I hear my son shouting, ‘Daddy daddy daddy,’ and I yell ‘Son, son son!’ I just listen for his voice and he grabs me from the tree.”

He and his son spent the night clinging to the trunk. Wind and water whipped around them. His wife and two of his daughters died.

The surge of ocean water that swept his village away also charged far up the Irrawaddy’s seemingly endless tributaries.

The government finally relented, and the aid workers came in hard.

A clutch of them accompanied journalists to Aunt Myint Tan, a small rice-farming village. They wanted to show off a United Nations microfinance project.

At the top of the dock rows of women waited, sitting on the ground.

It seemed they’d been waiting a while.

The local U.N. coordinator greeted the villagers and they answered in unison. The official explained the journalists presence then the women were called one-by-one to receive loan payments at a round table piled high with kyat.

Farmers can now borrow money from micro-finance programs like this one, or from the government, at rates well below those on the informal black market. Even with the low interest, keeping up with payments can be hard.

A husband and wife talked about struggling under the weight of a loan from an NGO. But loans and other aid have helped lift many, at least a little.

She had five acres before Nargis; she has 17 now.

Mg Nay Lin Htet is in fifth grade at the school. If he wants to go past grade seven, he’ll need to travel to a different school 30 minutes away.

Fewer than half of Kan Su’s students go past seventh grade. He thinks his family can manage it.

But he wants to become a doctor.

They’re landless, so there’s not much hope for him in the village. He’ll have to move to Yangon, he adds.

Back in Tha Kin Ma Gyi, five miles from the ocean, the wind and rain is picking up. Nargis’s toll is still felt today. Many borrowed money from the same local moneylender, and had to give him their property when they couldn’t keep up with the payments.

Five of the six people who worked with him died in Nargis. He has a lot less money to put into the business now, even after getting a loan from a friend.

When he’s asked if he cares about politics or who leads the country, he says he just wants somebody who can bring development and make things better than they are now.