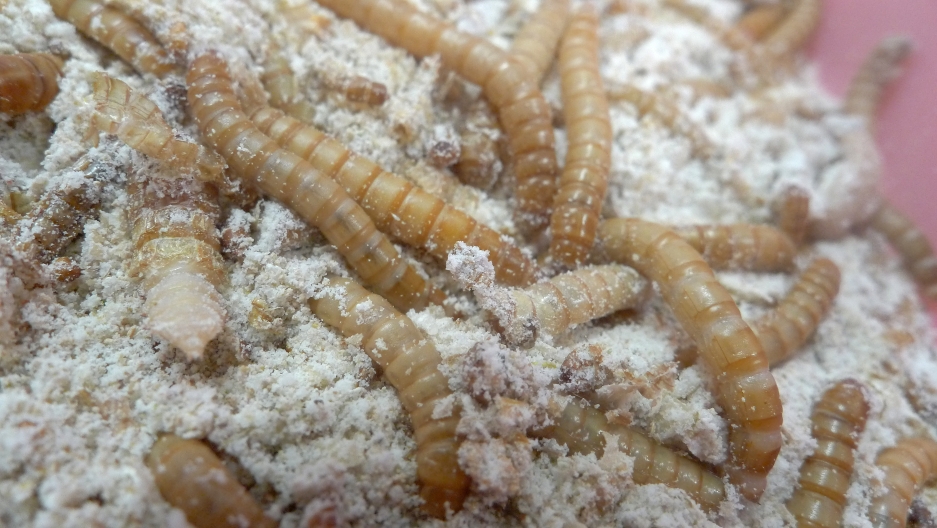 Mealworm larvae munch on flour at Laetitia Giroud's farm, in southern Spain. Giroud hopes the warm climate will save her on heating - and give her an advantage over her handful of competitors in northern Europe.

In a warehouse in Spain, a French farmer is raising what she hopes will be the next big thing in French and European cooking: insects.

It's a sound you'll hear on a lot of farms around the world at night, off in the distance, behind the moos or clucks of the farm animals.

But on this farm in the southern Spanish town of Coin, the creatures making the soothing chirping sound are the farm animals themselves—crickets. And then there are the tiny mealworm beetles—thousands of them, squirming in a vat, munching on corn flakes, looking a lot like cockroaches.

But don't call them that.

"If you say cockroach, it seems like trash," says bug farmer Laetitia Giroud. "My partner hates this word."

If you were Giroud or her partner, you probably would too. After all, they're trying to get people to eat these things. She says it can be a tough sell.

"For us in European culture, insects, you know [are] just disgusting. We try to kill them."

Beetles it is, then.

Dozens of plastic vats of them, on the floor of an otherwise empty warehouse on the outskirts of this quiet village. But it's only a fraction of what Giroud hopes to grow here in the future. She calls it Europe's coming bug revolution.

"They have amazing power that we just discover in Europe," Giroud says. "You know, 80 percent of the population in the world eats insects. We are the weird people here in Europe. We prefer to waste."

People have been eating bugs for centuries in Africa, Asia and Latin America. They're an excellent source of protein.

But here in Europe, Giroud and a small but growing number of other insect farmers need to overcome a couple of obstacles. She's already alluded to one: the yuck factor. How do you convince someone who's never done it to chew up and swallow a bug?

Just tell them they're really tasty, she says.

"For example, the meal worm, I like them, as an appetizer, you know? With some salt. [They taste] like potatoes, like potato chips. And when you try an insect once, you come back."

For the irredeemably squeamish, Giroud says there's a plan B.

She takes me up to a small loft in the warehouse to what I'll call "Cricketville." There are thousands of the chirping insects, leaping against their mesh cages.

Giroud says they're amazing insects that she can watch for hours.

But she also sends them off to be milled into powder, which can then be mixed into other foods. Like cookies.

"With chocolate chips and cricket powder," she says. "You mix and make your own. That is really awesome. Really good."

Or pies with meal worms. In fact, Giroud says, for just about anything you cook at home, you can substitute insects for meat or nuts.

And you don't even have to tell your dinner guests.

But you do have to tell European health authorities, if you're trying to sell insects commercially. And this is obstacle number two. Only a handful of European countries even have regulations for bug-eating.

Spain's bug norm is like the one regulating marijuana—if you have some, you can consume it, but you can't buy or sell it. So initially Giroud plans to export her critters back to her home country of France and elsewhere.

So why start her operation here in Spain? The weather.

"It is the best weather here, to save money [on heating]," she says. "Because it is really warm inside."

Giroud's also confident that a Spanish market is about to be born. European food and health organizations want to make insect eating legal everywhere, because as the world's population explodes, meat and fish will become more expensive and scarce.

Bugs, by contrast, are cheap and plentiful. Giroud says in just three days one pound of black soldier flies can produce about 300 pounds of eggs. That's a lot of protein.

It's also a lot baby bugs to look after, but Giroud says insect farming is a lot easier than, say, raising livestock.

She works in flip-flops and a black dress.

"We can raise them in open boxes," she says. "There is no risk with them. It is easier to run after a cockroach than to run after a pig. Have you ever done that? That is awful."

If all goes well Giroud hopes to sell about 20 tons of bugs to European consumers next year.