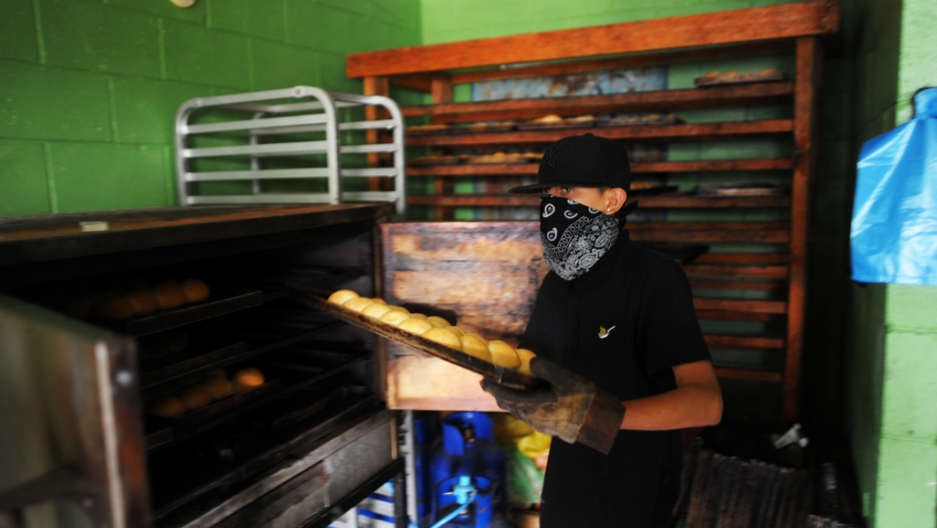 A member of El Salvador's Barrio 18 gang prepares buns at a bakery in Ilopango, on the outskirts of San Salvador.
Credit: Jose Cabezas
Share

ILOPANGO, El Salvador — Amid the musty smell of chicken droppings, Jose Vladimir describes his life as a gang member: hunger, beatings, friends murdered, a neighbor blown up by a grenade.

Now each afternoon, the 26-year-old feeds and cares for some 700 chickens on a small patch of forest in Ilopango, just east of this Central American country’s capital of San Salvador.

In several days, he and fellow members of the Mara Salvatrucha 13 (MS-13) — one of the largest and fiercest street gangs in the hemisphere — would slaughter their first chickens.

“The time that we execute them will be the most difficult,” Jose Vladimir said. “From when they were little chicks I’ve cared for them.”

Nearby, rival Barrio 18 gang members wear aprons and smash bread dough with their fists at a small house converted into a bakery.

The bakery and the farm were set up by Ilopango’s local government for young men who, though they may retain their gang affiliations and menacing head-to-toe tattoos for life, seek to leave behind a brutal past.

The tangled neighborhoods of Ilopango, and those of many other Salvadoran townships, have long been home to bloody turf wars between the MS-13 and Barrio 18 gangs.

More from GlobalPost: Interview with a gangster who's skeptical of the Salvadoran gang truce

In 2010, after gangs killed 17 people in attacks on buses — including one set aflame with passengers still inside — El Salvador’s President Mauricio Funes introduced a law that criminalized gang membership. The murder rate soared, with 4,308 people killed in 2011, the deadliest year since this country’s civil war.

The tide of violence began to ebb in March 2012 after the gangs announced a cease-fire, brokered by a team made up of a Catholic bishop and a former guerrilla fighter turned human rights activist.

El Salvador’s government at first denied involvement, but later acknowledged it had allowed several key gang leaders to be transferred to lower security prisons as part of the deal.

The truce has slashed El Salvador’s murder rate — previously second only to Honduras’s with about 14 killings a day — by more than half. Hoping to emulate its neighbor’s success, Honduras announced its own gang truce in May.

Early this year, IIopango was named El Salvador’s first peace zone, an area where local gang branches, known as cliques, pledged to cut down on violence and extortion.

MS-13 and Barrio 18 members painted over walls they’d tagged up. And with money from the town and the mayor’s encouragement, they built the bakery and the chicken farm to provide alternative employment.

The moves are evidence of the town’s commitment to upholding the nationwide truce, which has held for some 16 months. The gang truce is credited with saving some 2,000 lives across El Salvador — rare hope in a region wracked with gang killings. But with national elections looming early next year, it is showing signs of fraying: a fresh wave of violence killed 103 people in a single week this month.

More from GlobalPost: How Mexico got so fat

The conservative opposition, the Nationalist Republican Alliance (ARENA), has run television ads accusing the governing left-wing Farabundo Marti National Liberation Front (FMLN) of making pacts with criminals, raising tensions all around. And experts say the recent spike in murders may be the gangs’ way of signaling that they still have control and power, regardless which party wins.

The Salvadoran gangs, also known as “maras,” have their roots in southern California but spread here after mass deportations by the United States in the late 1990s.

They found it easy to recruit teenagers from poor families displaced during El Salvador’s civil war. In this country of 6.1 million people, the MS-13 and Barrio 18 gangs swelled to about 60,000 members.

The same two gangs have taken hold in neighboring Guatemala and Honduras, which now suffer among the world’s highest homicide rates.

Before the truce, gang cliques openly battled for territory in Ilopango. In 2011, there were 110 murders there. Last year, there were 61. This past June, Ilopango recorded no murders at all.

Despite the notable drop in murders, many residents remain skeptical of the truce. The maras are still dealing drugs, locals say, and extorting bus drivers and businesses.

“The truce continues to be weak, fragile, and at any moment we could return to the past,” said Carlos Rivas, a pastor at a 20,000-member evangelical church here.

Ilopango Mayor Salvador Ruano was in no mood to celebrate his town’s peacemaking achievements at a recent news conference he called. Instead, he slammed his fists against the podium and fumed against President Funes, a former TV reporter, for failing to support them.

The Funes government has promised $72 million to El Salvador’s peace zones, of which there are now 16. But Ruano, of the opposition ARENA party, maintains that Ilopango has not received a cent.

“It is too bad that the president and his security minister have not appreciated what we are doing,” Ruano complained. “But we are going to keep moving.”

The town is straining to find ways to occupy its reformed gangsters.

Marvin Gonzales, a spokesman for MS-13 in Ilopango and head of the chicken farm, said he’d like to see the farm become a collective that offered schooling and other types of work. He acknowledged, though, that possibility seemed remote.

Just a few minutes’ drive away from the farm, a group of Barrio 18 gang members, led by Jose Angel, 29, run their bakery out of a small house with walls painted blue.

“Look around, there are no guns here, no drugs,” said Jose Angel, who was wearing a polo shirt embroidered with the town’s crest. “No matter what political party comes, we are going to continue here.”

One recent afternoon, about 50 trays of “pan frances,” golden breakfast rolls, cooled on a wooden rack.

Wearing a threadbare white apron, 21-year-old Alex looked more like a California teenager, his hair spiked in a faux mohawk and a stud in his lip, than a hardened gang member. He had no visible tattoos.

But Alex, who asked that his last name not be used, said he had already seen three friends killed. Just before the bakery opened, one was shot in the head for having crossed an invisible gang boundary while selling avocados.

“I’m always going to feel anger” toward the MS-13, he said, feeding dough into a mechanical press. “Especially for what they have done to friends.”

Asked whether he would consider becoming a baker, Alex, who left high school in the ninth grade, turned the idea over in his mind.

“Maybe, if I learned to make other types of breads,” he said. “If I don’t study again, this could work for me. I just want to be like any other person, to just be someone.”