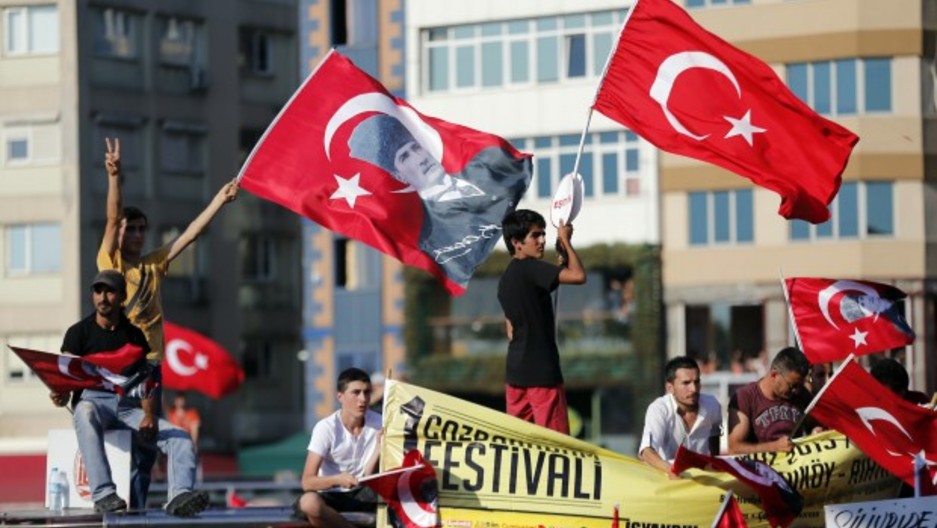 Share
Like their names, Emrah and Emre have some similarities. They are both from Ankara, the capital of Turkey. They both come from religious Muslim backgrounds. They both consider themselves politically moderate. But their reactions to the recent protests in Turkey, and to the ruling Justice and Development party (AKP), have been very different. Emre has looked to Turkey's past in processing what has been called the biggest challenge to Prime Minister Recep Tayyip Erdogan's rule since he took office in 2003. Emrah, meanwhile, has been looking at the leadership's present day policies. Emre did not used to support the socially conservative party. The 48-year-old runs a textile business. "We are being ruled by someone who has not done any business before," says Emre. "That is why I never supported the economical politics of the AKP." He says Turkey has now become an import-based economy thanks to AKP policies. He says he fully backed the recent protests when they were a small group of people seeking to protect a city park. But he grew suspicious when hundreds of thousands poured into Turkey's streets after police used tear gas and water canons on a group of sleeping protesters at the park. He says they were too organized to be a spontaneous people's movement. "In this country always there has been a dirty game being played," says Emre. The "dirty game" Emre is talking about refers to a time when the country's politics were riddled with conspiracies, power plays and military coups. He says he was reminded of the country's dark past when he saw guys throwing rocks and Molotov cocktails at police. "I was not supporting AKP at all, I was not going to vote for them," he says. "Now, if you go for elections tomorrow I'll have to give my vote to AKP." On the other hand, Emrah cast his first vote ever in favor of the AKP. Ten years later, he is now 28-years-old and works as a software developer for a major financial institution. But his support for the AKP has waned. When hundreds of thousands of protesters poured into Turkey's streets to express their dismay at what they have called an increasingly authoritarian rule, Emrah joined them. He says the party's power has gone unchecked. "Any law that they would create would pass through parliament so easily," says Emrah. Like the hundreds of thousands of others, Emrah took to the streets after the crackdown on the sleeping protesters. "I don't know," he says. "I felt really angry about it. I guess that is when I said 'enough.'" Now that protests are less frequent, many think things have calmed down, but Emrah points out that things are getting worse in some ways. Lawyers were denied access to detainees at one point during the protests. The Prime Minister called Twitter "a menace to society," and the government says it is investigating millions of tweets for inciting riots. Some have already been detained for their activity on social media. Journalists have also been searched or detained and photos erased from their cameras. Reports of physical, sexual and psychological abuse have emerged from detainees of all stripes. The Ministry of Health is investigating doctors who treated injured protesters. In an overnight session last week, parliament removed the Chamber of Architects and Engineers from Istanbul's city planning. Much of the protesters' activity has also changed. Most of the time, people gather peaceful in local parks and discuss the changes they want in government. These days, those in favor of the AKP and those against them have become increasingly polarized. Groups claiming to be Erdogan supporters have violently attacked several of the park forums. Others claim those who look like protesters have attacked religious women in headscarves. Emre blames the radical groups amongst the protesters for the polarization. But Emrah says it is Erodgan's provocative language that has pitted supporters and critics against each other. For example, Erdogan claimed that in early June, protesters entered a mosque with beer. In Islam, alcohol is forbidden, and drinking inside a mosque is an incredible insult. Erdogan's supporters shouted in dismay. "In this digital age everybody should know he is lying," says Emrah. "Even the guy who works at the mosque even came out and said, 'No I did not see anyone who was drinking.' Still people believe that." Emre says he is willing to concede that the photo he saw showing beer cans inside the mosque could have been photo-shopped, but insulting Islam was pretty common in the days before the AKP, so Emre people like him are inclined to believe Erdogan. "We think, 'Oh, it is happening again." he says. It's too early to tell whether the protests will have a long-term impact on Turkey. But Emre and Emrah agree that the AKP still has a great deal of support throughout Turkey. "The liberal people, which mostly are young college students, make me really hopeful about our future," says Emrah, adding the students are discussing ideas for a more democratic future. But in the mean time critics like Emrah say there is no party that represents them, or one that is organized enough to take on the mighty AKP.