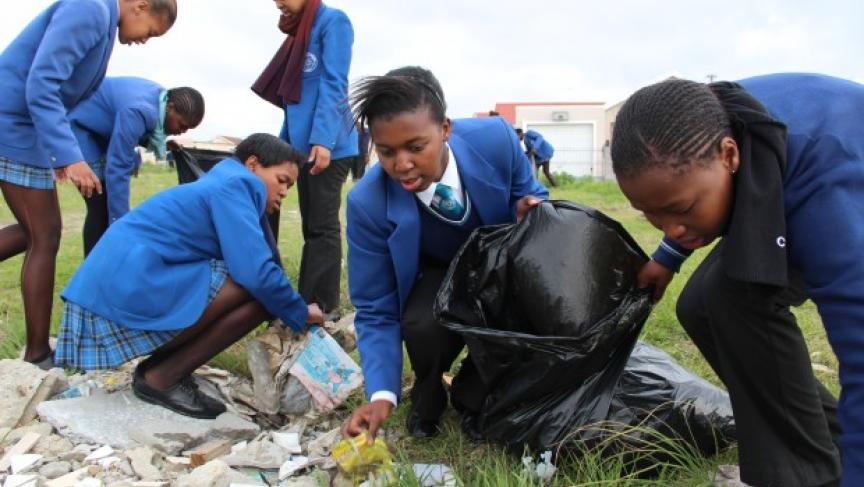 Students from COSAT collect garbage in a field near their school. (Photo by Anders Kelto.)

Editor's note: This blog post is part of a year-long series, School Year: Learning, Poverty, and Success in a South African Township.

When I arrived at COSAT Thursday morning, I was greeted by a powerful round of screams. I walked into the school auditorium, to see what was going on.

Inside, two girls stood on stage. They sang and clapped their hands, and the rest of the students followed along. Several students held up a large South African flag on stage.

It was a ceremony dedicated to Nelson Mandela, who turned 95 Thursday.

Most students at COSAT were toddlers when Mandela retired from public office. Some hadn't even been born. But they all seemed to know what Mandela did for the country.

“He struggled for us to get this freedom,” said Tandie, a 12th-grader. “So in this day, we get to pay him back, (by helping) other people.”

Students were joining South Africans across the country in 67 minutes of community service — that’s one minute for each year Mandela spent in prison or politics.

After the ceremony, the students spilled out of the school’s front gate, separating into different groups. Some walked through a large, open field, picking up wrappers and plastic bottles. Others walked along the streets, putting trash in bags.

“The municipality doesn't give dustbins or anything, so people just throw things anywhere they want,” said Wendy, a junior at COSAT.

All of the students were required to be here, in the chilly breeze. Some said they probably wouldn't have shown up otherwise. But others said they were actually excited about the work, and wanted to honor Mandela — whom they often refer to by his clan name, Madiba.

“We’re doing it for Mandela,” said Noluthando, a junior. “He’s done so much for South Africa.”

She said she liked to think about Mandela — and what he endured — while she worked. She had never met him, but it somehow made him seem close.