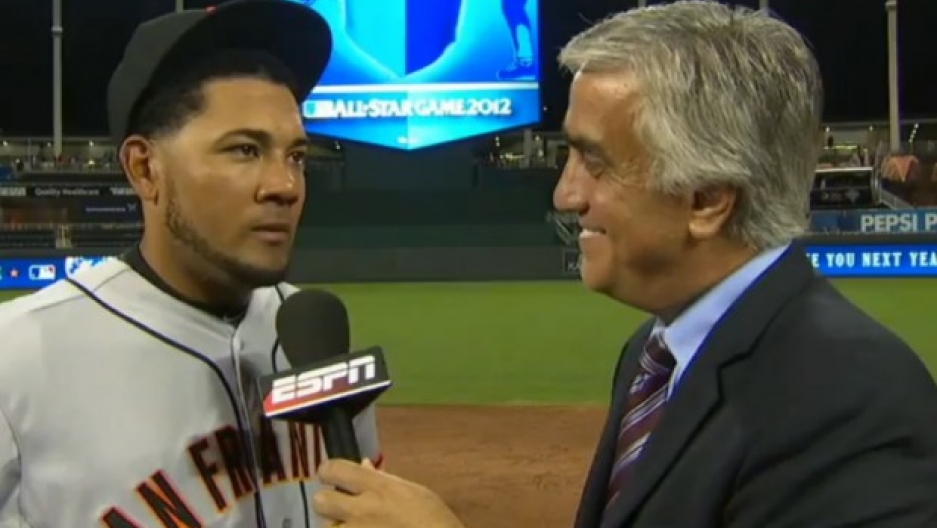 Baseball fans this week were treated to the Major League All-Star Game and Home Run Derby. Cuban-born Yoenis Cespedes with the Oakland A's won that contest.

The 27-year-old Cuban defected in 2011 to the Dominican Republic to become a Major League Baseball player.

Shortly after winning the contest, Cespedes was interviewed by ESPN's Pedro Gomez, who switched between English and Spanish for both question and answer.

Not an easy thing to do on live television.

But, Gomez was blasted by many on Twitter for speaking Spanish.

This was not the first time that Gomez has switched between Spanish and English during a television interview. Gomez, who was was born and raised in Miami and is the son of Cuban refugees, grew up speaking both languages.

His talent is more and more in demand these days. According to Major League Baseball, on opening day this year 28 percent of baseball players were foreign born, and almost all of those were from Spanish-speaking countries.

Host Marco Werman spoke with Gomez, who is a member of the Baseball Writers Association of America and has covered more than 15 World Series. Gomez defended foreign-born ballplayers who conduct their interviews in Spanish with ESPN.

"If we are able to do something like this, where we can hear their voice and then just do a quick translation for it, I've heard from so many people saying: What exactly is the harm?" said Gomez.

"To expect somebody who has been here 18 months or 24 months to already be able to conduct an interview in front of millions of people in a language that's not theirs, I'd like to know if any of these people (critics of bilingual interviews) moved to Germany, in two years would they have German mastered? And I believe that the answer would be no."

Gomez wasn't the only Spanish speaker getting some blowback at the baseball festivities this week. During the All-Star Game on Tuesday, Grammy Award winning singer Marc Anthony sang "God Bless America." Many people on Twitter criticized the choice of Anthony to sing this iconic American song. Anthony was born and raised in New York and is Puerto Rican.

In June, an 11-year-old Mexican-American boy born and raised in Texas sang the Star-Spangled Banner at Game 3 of the NBA Finals in San Antonio while dressed in his mariachi uniform. He too was the victim of anger and racist remarks on the internet for not being "American enough."

In a show of support, the San Antonio Spurs invited the boy, Sebastien De La Cruz, for an encore performance in Game 4.

And while it's tempting to say these incidents reflect a new mood in the United States, they don't.

In 1968, a young Jose Feliciano, a virtuoso guitarist and singer born in Puerto Rico and raised in New York City, sang the national anthem at the 1968 World Series in Detroit. Feliciano, who is blind, walked onto the field with his guide dog and guitar, then played a version with a Latin jazz twist.

Felicino was booed and roundly criticized for this, then banned from many American radio stations for several years sending his career into a nosedive.

Many years later, Feliciano wrote this in a blog post about his anthem rendition:

"I played it slowly and meaningfully, feeling the vastness of the stadium and the presence of so many people. But before I had finished my performance I could feel the discontent within the waves of cheers and applause that spurred on the first pitch – though I didn't know what it was about.

Soon afterwards I found out a great controversy was exploding across the country because I had chosen to alter my rendition of the national anthem to better portray my feelings of gratitude. Veterans, I was being told, had thrown their shoes at the television as I sang; others questioned my right to stay in the United States and still others just attributed it to the times, feeling sad for the state of our country. But thankfully, there were many who understood the depth and breadth of my interpretation. Those, young and old, who weren't jaded by the negativity that surrounded anything new or different. Yes, it was different but I promise you – it was sincere."

45 years later, Feliciano's version is widely considered one of the greatest, most memorable renditions of "The Star Spangled Banner" ever recorded.

Feliciano has reprised his rendition many times since, including recently at the Major League Playoffs in San Francisco last year.